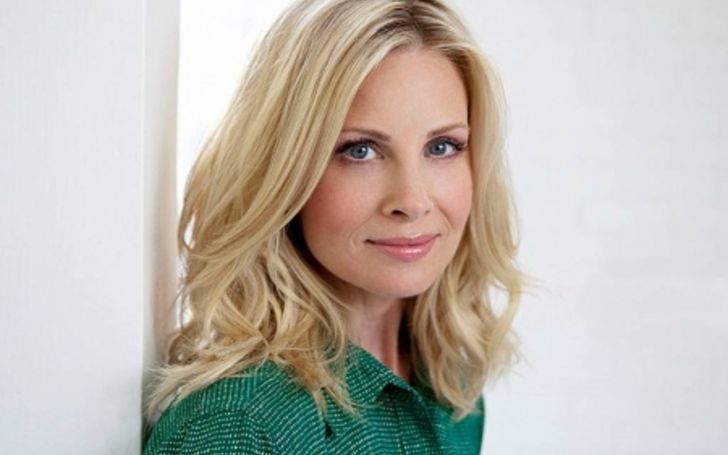 Monica Potter is an American actress and model who came into fame after her role as Kristina Braverman in TV series ‘Parenthood’. The actress also has played in other several movies and TV shows like  ‘Saw’, ‘Patch Adams’, ‘Con Air’  and  ‘Along Came A Spider’. The actress is also famous as the Golden Globe Award-winning actress for her role in Parenthood.

Besides acting and award-winning, Monica is also the owner of various skincare products under the name of “Monica Potter Home” which she founded herself. Her home decor business is in Cleveland, Ohio. She is active on Instagram and Twitter.

The actress’s birthday lies on June 30. She was born in the year 1971 with the full name of Monica Gregg Brokaw in Cleveland, Ohio. She was born as the daughter of  Paul Brokaw, the inventor of the first flame-resistant car wax, and Nancy Brokaw. Talking about her siblings, she has three sisters named Brigette, Kerry, and Jessica. She spent most of her childhood time in her hometown.

Monica attended Villa Angela-St. Joseph High School for imparting knowledge. Her interest in acting made her go to the Cleveland Play House beside the school. Talking about her educational qualification, she is a graduate student from Euclid High School.

The gorgeous actress has dated a couple of men in the past. Talking about her important relationships, she had got married to Tom Potter in 1990. The couple had two sons, Daniel Potter, and Liam Potter. But their relationship couldn’t last more than 8 years and separated.

Lately, she was married to surgeon Daniel Christopher Allison. Their marriage relationship was going in a happy way since 2005. The couple was blessed with a daughter, Molly Brigid Allison. Her husband joined the US Navy Reserve as a physician in 2015. In less than 3 years, they filed for divorce and are living a completely different life.

With two marriages gone wrong, Monica is now single and getting some rest from the relationships and affairs. However, she has a good relationship with all her children.

Monica was hardworking as a child and used to work in a flower shop and sub sandwich shop at her teenage. She was interested in acting and modeling, so her father gave her a chance and she got selected for modeling in newspapers, local commercials, and magazine ads. Her pictures made her popular among the public.

Due to the scarcity of young actress at the time, she immediately got to appear on the screen on CBS soap opera, ‘The Young and the Restless’. In the same year of 1994, she also appeared in Alan Jackson Music ‘Tall, Tall Trees’.

With time, she continuously played some minor roles in the movies and sustained in the film industry. In 1997, she finally got landed on the role of Tricia Poe alongside Nicolas Cage in the movie ‘Con Air’. The movie was a breakthrough for her career as it got much appreciation in s short time. Her opposite role to the Robin Williams in ‘Patch Adams’ also made her popular among the comedy-loving people.

Besides the above-mentioned movies, she has also appeared in Martha, Meet Frank, Daniel, and Laurence’, ‘Without Limits’, ‘A Cool, Dry Place’ ‘Heaven or Vegas’, ‘Head Over Heels’ and more. She also appeared alongside Morgan Freeman in the movie “Along Came a Spider” based on a novel by James Patterson in the year 2001. Also, her other movies are  ‘I’m With Lucy’ and ‘Saw’ too. Her role as  Lori Colson in the TV series, ‘Boston Legal’ also was loved by audiences. With her rising career, she also appeared in other movies ‘Lower Learning’ and ‘The Last House on the Left’.

The year 2010 also favored her as she got the role of Kristina Braverman in the super hit television drama series, ‘Parenthood’ for which she has received couple awards as well as appraise from all audiences. Lately, she appeared in the TV series named ‘Wisdom of the Crowd’ in the year 2017.

Monica has amassed a great amount of wealth from her career as an actress and a model. Being active from the year 1994, she has played in numerous movies and several TV shows. Besides, she also runs her own business ‘Monica Potter Home’. With all the work, her total assets are worth $3 million. The actress is also active till now and is scheduled for some upcoming movies. Thus, her net worth is estimated to increase with time.