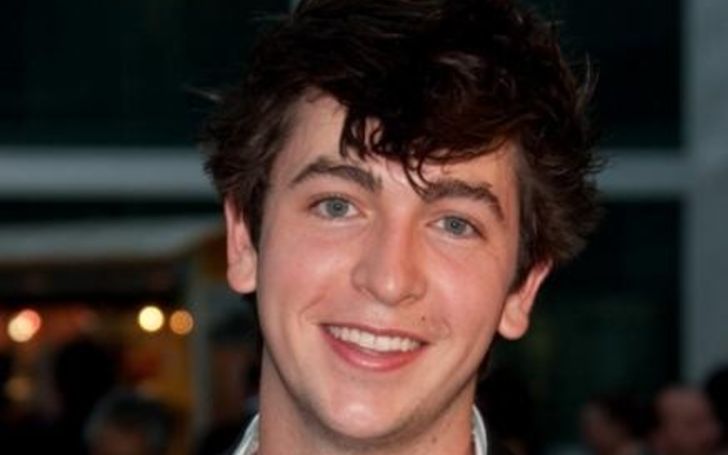 Nicholas Braun is a famous American actor rising into fame after his role as Cameron James in TV series “10 Things I Hate About You”. Besides, his work in the HBO series “Succession” also has made him popular and lovable among the fans. Nicholas is also a singer and is providing some songs to the world. With his popularity in the acting and music industry, he is also a rising star with 122k followers on his Instagram.

Nicholas Braun was born on the 1st of May, 1988 in Bethpage, New York, the USA with birth name Nicholas Joseph Braun. His parents Craig Braun and Elizabeth Lyle raised him together till four years old. In 1993, his parents got divorced but he was not affected by it. Talking about his siblings, he has a musician brother Christopher Deyo Braun and two halfbrothers, Guillaume Rumiel Braun and Timothy Braun, who is also devoted to the film industry.

Regarding his educational qualification, he got schooled at  St. Mark’s School in Southborough, Massachusetts. He graduated from the same school in 2006. He further joined Occidental College. However, his major subject and university education are not provided yet.

The actor is said to have a couple of relationships in the past. With his name rising in the industry, he was seen to have dating actress Cody Kennedy in 2007. After a couple of years of dating, they got separated. After he was also romantically linked with his How To Be Single co-star, Dakota Johnson in 2015.

Even though rising actor Braun is a tough egg to crack, his relationship status is single as of now. The 31-year-old actor seems more focused on her career as an actor and musician than relationships.

The actor made his debut appearance in the TV film “Walter and Henry” introducing himself in the industry. With his first appearance, he got selected for many small roles which helped him to form a fan base. At first, he only got a role in TV film and series. They helped him to gain fame and he made his debut film appearance in the 2005 movie “Sky High”. He played the role of Zachary “Zach” Braun and got attention.

Again, he came back to the guest’s roles in various TV series like, “Without a Trace”, “Shark”, and “Cold Case”. The Disney Channel also introduced him to their movies such as ‘Minutemen’ (2008) and ‘Princess Protection Program’ (2009). After he got the role in the teen romantic comedy film called “The First Time” based on the book by  Dennis Jürgensen. After dozens of small roles and TV films, he finally landed on the role of awkward sophomore student Cameron James on ABC Family sitcom ’10 Things I Hate About You’ from 2009 to 2010. The series became a success and he became known to all people.

After his fame reached the peak, he got roles in the movie consecutively. He appeared in the action-adventure film ‘The LXD: The Uprising Begins’ in 2010. The following year, he made his screening in the comedy-drama film, ‘Prom’. Along with it, he also appeared in the horror-thriller film, ‘Red State’ and in the comedy film, ‘Chalet Girl” as Billy Ray and Nigel respectively. The year 2012 was also a busy year for him. He starred in a science fiction comedy film, ‘The Watch” and “The Perks of Being a Wallflower”.

Nicholas Braun has a good earning from his film career. Being active since the year 2005, he has amassed a great amount of money. With his career as an actor, he has an estimated net worth of $3 million. His involvement and coordination with a couple of brands have also donated a part in his fortune.