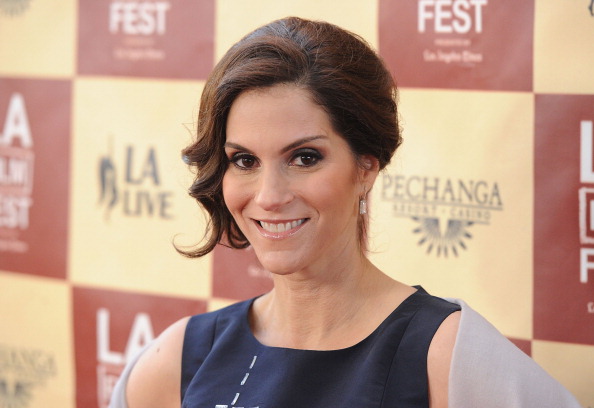 Jami Gertz is not only an actress, but she also earned a producers’ credit on the Academy Award-nominated film “A Better Life.” Jami is currently married to her longtime husband, Antony Ressler. The couple together has welcomed three sons: Oliver, Nicholas, and Theo Ressler. Jami Gertz resides with her family in the exclusive Beverly Park community.

Gertz and her husband are becoming the most charitable couple of all by non-profit organization The Giving Back Fund after donating more than $10 million to institutions like LACMA and Cedars-Sinai through their Ressler-Gertz foundation.

Know more about Jami Gertz married life and her husband including their children.

Jami Gertz has had seven romantic relationships. The longest one is with Anthony Ressler with whom she enjoys a happily married life.

Other relationship of Jami with John Cusack (1983), Corey Feldman, Steven Seagal, Sylvester Stallone, and Jonathan Prince did not last for long.

Jami Gertz married the director of private equity firm Ares Capital Corporation, Antony Ressler on 16th June 1989. She has always been loyal and caring to her husband, Antony Ressler.

Hence no any rumors about her getting involved in extra-marital affairs or boyfriends have swirled around. On 16th June next month, Jami will be celebrating her 29th wedding anniversary with her beloved husband, Antony Ressler.

In one of the interviews, Jami joked:

“I’m a boy — I’ve become a boy! I actually believe that my husband married me because I could be dressed and ready in ten minutes. I married him because he’s very handsome and he smells good and he’s very smart.”

They are one of the luckiest couples alive as they have everything they desired; a healthy happy marriage, financial security, a luxurious house, world recognition, and three sons.

Though she was first a movie star, rising to fame in John Hughes’ 1984 classic, Sixteen Candles, Gertz confides that she prefers television nowadays, and not just because she’s currently starring on ABC The Neighbors, either.

Jami Gertz has about 27 movie credits. The first movie to feature her was On the Right Track, in which she played Big Girl in 1981. Jami Gertz acted in 25 other movies including a role in the 2001 movie Lip Service and a role as Gilda Radner in the 2002 film Gilda Radner: It’s Always Something.

Jami Gertz has about 10 TV show credits. The first TV show to feature her was The Facts of Life in 1984, where she played Boots St. Clair.

Likewise, she played Kimmy Bishop on Ally McBeal in 2002. Moreover, she appeared in Marlo Klein on Entourage in 2010. She also played Laura on Modern Family in 2011.

Jami Gertz played Debbie Weaver on The Neighbors in 2014. Some of her other recent TV credits include The Talk in 2013 and The View in 2012.

Jami Gertz’s Net Worth: How Much Wealth Has She Earned?

As Jami Gertz has been a part of nearly 50 different projects, she must have acquired drooling net worth. Majority of Jamie Gertz net worth is from her husband, Antony Ressler who is a co-founder of Ares Management that has about $45 billion under management.

As of 2019, Gertz’s net worth is around $2 billion. In just a year, in 2020, Jami’s increased over a $1 billion on her net worth, making  her fortune surge to $3.1 billion. Moreover, she makes a good amount from her movies and TV series. As per some sources, a TV star makes an average salary that ranges from $150 thousand to $1 million.

Besides that, Jami owns a house in Los Angeles where she lives a lavish life with her family.

Jamie Gertz is also the leading lady of the NBA team, Atlanta Hawks which her husband purchased for $720 million.

Jami Gertz was born on 28th of May, 1965 to her parents, Walter Gertz and Sharyn Gertz in Chicago, Illinois, U.S. Her real name is Jami Beth Gertz. Jami’s parents raised her along with her two brothers, Scott and Michael.

Besides, the actress graduated from Maine East High School. Later, a nationwide talent search discovered her. Henceforth, she started her acting career.