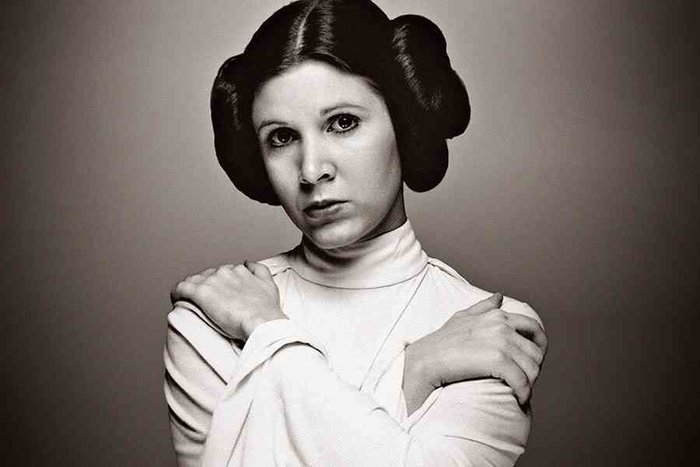 An American actress, writer, and humorist, Carrie Fisher had an interest in books and writing poetry since her early age. Her role as Princess Leia in Star Wars and its sequels made her world famous. Fisher struggled with alcohol and drug abuse in the 1980s but came back in 1987 with her famous book Postcards from the Edge, which she featured into a film starring Meryl Streep.

Carrie Fisher went on to play supporting roles in films and was a prolific author and screenwriter. Carrie delivered her role-playing Leia for the Star Wars: Episode VII – The Force Awakens in 2015. Fisher died on December 27, 2016, just days after suffering a major heart attack. She was 60 years old then. Today, get to know about Carried Fisher married life, husband, children, bio, and wiki facts,

The magnificent writer and actress remained busy with multiple works until she experienced a  severe heart attack. She was then flying from London to California on December 23, 2016. On  December 27, 2016, the admired actress died at the hospital at the age of 60 years. A spokesman for Fisher’s family released a statement on behalf of her daughter Billie:

“She was loved by the world and she will be missed profoundly. Our entire family thanks you for your thoughts and prayers.”

A day after Fisher’s death, Debbie Reynolds died. Reynolds had been making funeral arrangements for Carrie with her son Todd Fisher and reportedly suffered a possible stroke. Todd Fisher said from the hospital afterward Reynolds death:

“She’s now with Carrie and we’re all heartbroken,”

On January 5, 2017, a private memorial was held for Fisher’s family at Fisher’s Beverly Hills home, where her family, friends, relatives, and many celebrities attended. Actresses Meryl Streep, Tracey Ullman, author Bruce Wagner and comedian Stephen Fry were among those who eulogized Fisher.

Fisher was open about discussing her diagnosis of bipolar disorder and struggles with drug addiction. In 2016, Harvard College presented Fisher with its Annual Outstanding Lifetime Achievement Award in Cultural Humanism, highlighting:

Her forthright activism and outspokenness about addiction, mental illness, and agnosticism have advanced public discourse on these issues with creativity and empathy.

At an early age, Carrie Fisher had an interest in books and writing poetry. She followed her parents into the show business. In 1975, Carrie made her film debut in Shampoo. But her big breakthrough to her career was playing Princess Leia in Star Wars (1977). She then liberated the act in the film’s sequels The Empire Strikes Back (1980), and Return of the Jedi (1983).

In 1980, Carrie Fisher played in The Blues Brothers with Dan Aykroyd and John Belushi. She then struggled with alcohol, drugs and depression but continued to act in series that include Under the Rainbow and Hollywood Vice Squad. Fisher then released her first novel, Postcards from the Edge, an auspicious semi-autobiographical tale of a show business mother and daughter. She later fitted the novel into a screenplay that was made into a 1990 film featuring Meryl Streep and Shirley MacLaine directed by Mike Nichols.

Fisher was an in-demand screenwriter

Fisher also played in a series of substantial supporting roles in films such as Woody Allen’s Hannah and Her Sisters (1986), When Harry Met Sally (1989) and Soap Dish(1991). She later jumped into her own interview show with Oxygen Media called Conversations From the Edge With Carrie Fisher (2002-2003).

She also had a role playing Rob’s mother on the British sitcom Catastrophe (2015). Brilliant screenwriter, Carrie used to help in revising many Hollywood scripts, including Sister Act (1992), Outbreak (1995) and The Wedding Singer (1998), among many more. She was also mining her life experiences to create such smashing books as The Best Awful There Is (2004), Wishful Drinking (2009) and Shockaholic (2012).

Fisher also returned to the film that made her famous, appearing in Star Wars: Episode VII – The Force Awakens, along with Harrison Ford and Mark Hamill. The film, directed by J.J. Abrams, opened in the U.S. on December 18, 2015 and broke an array of box office records, earning more than $247 million domestically in its opening weekend.

Fisher also completed filming the eighth episode of the Star Wars saga, The Last Jedi, which hit theaters in December 2017. In November 2016, she released The Princess Diarist, a memoir based on the diaries she wrote while filming the original Star Wars trilogy. In the book, Fisher reveals that she had an affair with co-star Harrison Ford in 1976 during the filming of the first movie. She later won a posthumous Grammy in the Best Spoken Word Album category for her reading of the book.

Actress and writer Carrie Fisher was born on October 21, 1956, in Burbank, Los Angeles County, California. Her father was singer Eddie Fisher, and her mother was actress Debbie Reynolds. In one of Hollywood’s scandals, Fisher left Reynolds when Carrie was two years old for actress Elizabeth Taylor.