‘Shameless’ Emmy Rossum is finally married! After two years of dating, her boyfriend finally pops the proposal; Also know about her diet and net worth! 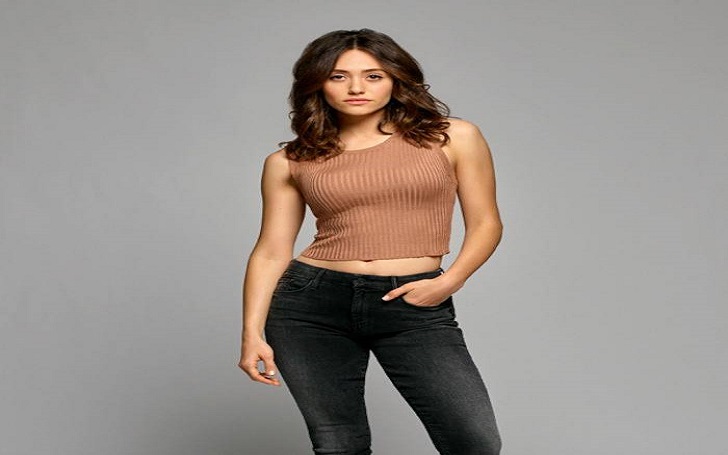 There are many fans of Emmy Rossum who imagine her as their bride-to-be. Who wouldn’t have such imaginations after seeing how lovely and stunning she is?

It looks like lots of heart will be broken on hearing that the dreams of marrying Emmy Rossum have finally come true for one particular person.

Yes, Emmy Rossum married to her long-term boyfriend. Let’s get more details on their wedding and their love story.

Shameless star Emmy Rossum is now officially off the market as she married the director Sam Esmail. The couple married in New York City on a sunny Sunday at 7 a.m. in the Central Synagogue building. The interior and décor were lavish enough to stun any guest present there.

Their reception took place in the Guggenheim Museum where top-notch celebrities also attended as guests. She had worn an exquisite designer dress by Carolina Herrera for the wedding. The plain white dress perfectly accentuated her curves and made her look glowingly radiant.

The elegant @emmyrossum wore a custom #CarolinaHerrera wedding gown yesterday to her nuptials in NYC.

Her makeup artist for the big ceremony was Jo Baker, and her hairstylist was Ryan Trygstad. Together they helped her achieve a simple yet elegant look which she sported comfortably throughout the entire party.

The 37-year-old director popped the question to Rossum over their romantic weekend getaway in Los Angeles. Everyone was waiting for this to happen as the couple was dating for the past two years.

We are glad that this fairytale for this couple came out to be true. We wish the newlyweds a very happy married life.

There’s no one else I’d rather be on this journey with. I feel lucky every day.

Now fast forward to 2 years, Emmy Rossum is still happy with Sam Esmail. She shared an anniversary post with her love on her socials. Emmy also wrote that there’s no one else she’d rather be on this journey with.

I feel lucky every day.

Well, congrats to the couple for their two years.

For Emmy Rossum, this is her second marriage as previously she was married to Justin Seigel. The couple married on February 17th, 2008.  They looked very happy together whenever they were spotted together.

Even though they had so much of chemistry together, things ended for them after Justin Seigel filed for divorce in September of 2009 citing “irreconcilable differences.”

Emmy Rossum paid the pony up of $57 thousand in order to settle things between them. Well, as they say, everything happens for a reason, maybe the universe wanted Emmy to meet up a new guy like Sam Esmail.

After working as a regular in Shameless for over 10 years, Emmy Rossum announced a shocking revelation to her fans.  Back in August 2018, the lady, who portrays the role of Fiona Gallagher, revealed that she wanted to leave the show before it gets boring to her.

Though Emmy Rossum is leaving the show, there has been no abrupt changes in the whole of the script. Don’t weep yet as her last episode is still not coming too early.

More about Emmy Rossum; professional life, diet, and net worth!

This 27-year-old multi-talented American actress is also director and singer-songwriter. Emmy is famous for her portrayal of Fiona Gallagher in the television series Shameless. Rossum has also starred in other great movies like Songcatcher (2000), An American Rhapsody, (2001), Passionada (2002), etc.

You May Like; Daniel John Gregory’s Age, Facts, Wiki-Bio

Emmy has also made the headlines by revealing her Gluten-free diet and Ballet dancing classes. Such an amazing career build of Emmy has certainly raised her net worth. Her total net worth is said to be $10 million according to sources.

We wish Emmy a married life and wish to get more updates on her love life.