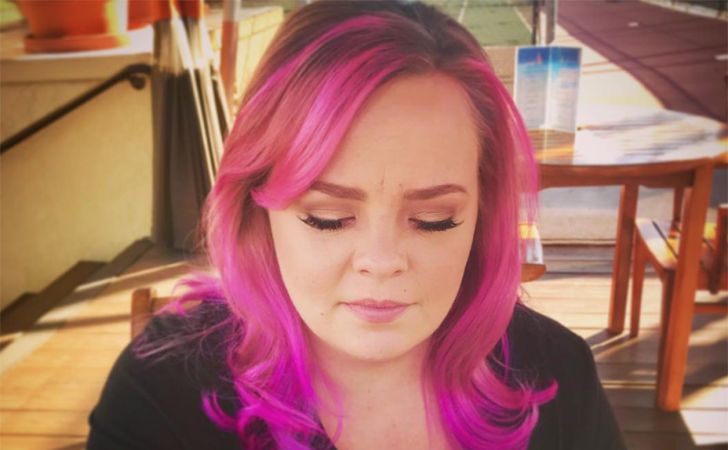 If you follow the American television industry, then you must be familiar with the name, Catelynn Baltierra. The star of Teen Mom OG recently went through an unfortunate tragedy as she and her husband, Tyler Baltierra, suffered from a miscarriage.

The 27-year-old actress enjoyed significant success from her career as a TV personality, a book author, and a public speaker. So, today, we take you closer to the personal stories of the actress from 16 and Pregnant.

The Teen Mom artist, Catelynn Baltierra, is blissfully married to fellow actor, Tyler Baltierra. The glamorous duo shares a special bond that dates back to their high school days.

The Baltierra duo met when they were in the 7th grade, and ever since, they felt a strong vibe between them. Notably, the two started to date from 2005 and are together despite many ups and downs.

After more than a decade of dating, the couple finally decided to take things to the next level. They married on August 22, 2015, at Castle Farms, Michigan. The celebrity wedding featured TV stars like Maci McKinney and Kailyn Lowry alongside 152 other guests.

The 27-year-old is the mother of three children as of now, Carly Baltierra, Novalee Reign, and Vaeda Luma. Just when the couple started to feature on 16 and Pregnant, she was pregnant for the first time with a daughter, Carly Baltierra. Similarly, she gave birth to her second child on January 1, 2015, and a third child on February 21, 2019. Baltierra just celebrated the birthday of her third kid, Vaeda. The duo took to their Instagram to share a photo of their kids and wished their third child, Vaeda, a very happy birthday.

The television star,  Catelynn Baltierra, went through great tragedy as she miscarried her child in November 2017. She dropped her infant child shortly after surprising her soulmate with her pregnancy news.

The disheartening trauma happened when she was only six weeks into her pregnancy. Consequently, the lovely duo went through saddening mental pressure after suffering the uncalled incident.

In an interview, Baltierra revealed that she even had suicidal thoughts in her mind following the death of her unborn child.

Baltierra Suffered Yet Another Tragedy

The elegant artist, Baltierra, endured yet another devasting loss after losing her dog, Caesar. She and her life-partner, Tyler, lost one of their family members, their adorable brown dog in November 2019.

Baltierra, last week, announced the unexpected death of her pet in a very emotional caption on her Instagram. At this point of such difficulty and yet another family loss, we provide heartfelt condolences to the Baltierra couple and hope that their love, Caesar rests in peace.

For more updates and news about your favorite celebrities, stay connected with us at The Celebs Closet.