Vicky Stark Made a Worth from Fishing; Her Net Worth and Dating Affairs! 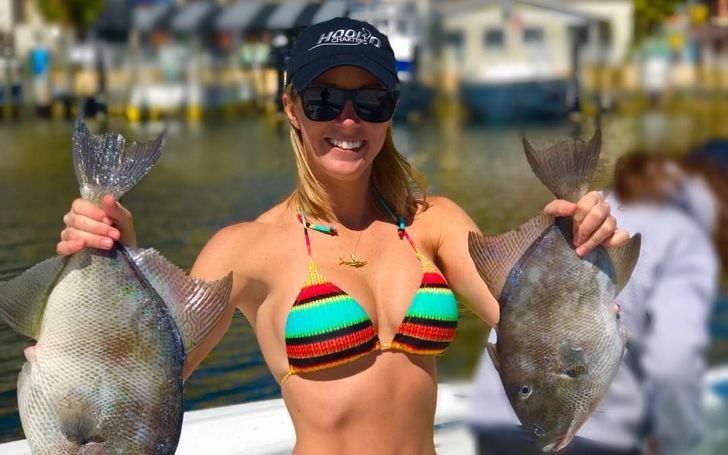 Vicky Stark, the Internet sensation from South Florida, came to the limelight in 2016 for posting her fishing pictures on Instagram. Though she shared her post on Instagram from April of 2012, she got recognition after turning into a glamorous, in-bikini fisherwoman in 2017.

The 34-year-old swamped her Instagram with 194,000 followers by posting pictures and videos of herself fishing in a fashionable bikini. So now, let us know more about the fishing Diva.

Vicky Stark Net Worth from Modeling

Vicky Stark is estimated to have a net worth of a staggering $250,000 as per her growing popularity in the Social Media and her endorsement deals.

Sponsorships deals started to haul from various brands to endorse their products via her social profiles, after Vicky’s recognition as an upcoming star on Instagram as of today. She endorses brands like Smith Optics, One One swimwear, G Loomis, Scales Gear, Xtratuf boots, FarOut Sunglasses, Orca Coolers and many more.

In July 2019, she collaborated with Peacock Bass Adventures and fishing in the Bahamas and also filmed her videos with Two Conchs for their SportsMan Channel.

Consequently, her YouTube channel named Vicky Stark was created in 2011, where she posts her fishing videos. The videos bought in a lot of visitors and hence, her fans count rose to 345,000 subscribers as of December 2019.

In addition to her pile of greens, an online store where she sells fishing stuff like hooks, lines, and sinkers is also doing a pretty good job of collecting the revenue.

With her growing involvement with sponsors and endorsements, she will be making quite a fortune from her fashion-based fishing career.

Although Vicky remains closed about her stuff, the rumor of the relationship of the Fishing star with Captain Ryan Eidelstein from her fishing crew started hitting the internet as Vicky began sharing pictures of herself accompanying Eidelstein. Ryan charters Inshore & Offshore trips and is also a licensed realtor at Universal Realty Services.

The couple has not confessed their first encounter, and when they started dating but we can assume it was during the fishing trips. They shared their first picture on Instagram on April 27, 2019, where she, who was holding giant fish, captured a photo with her man, smiling at the camera.

Later, on July 4, 2019, another cozy shot where both of them were in beach costumes. However, the relationship was revealed when Vicky replied to a comment when one of her fans asked if she was dating Ryan, she replied, ‘Yes’ without any hesitation.

From the looks of it, Vicky and Ryan are enjoying precious moments together and living the moment these days without any official statement on future commitments.

Vicky was born on August 5, 1985, in Florida, USA. She started fishing from a very young age as per her description in many of her videos, answering her fan’s question about how she acquired her skills. Although the Instagram star talks about her childhood, sometimes, privacy is her concern, and she barely reveals about her family and her personal life.

On July 19, 2017, The Daily Mail, UK, covered her news as her popularity was in the rising trend for her fishing and glamour. Though she is often criticized for her fishing techniques, the diva is not concerned about the haters’ comments on her and continuously focuses on her glamorous fishing endeavor. She stated,

I just love being on a boat, the thrill of not knowing what you’re gonna catch; the fight, the tug at the end of your pole, the energy and the excitement of being out there, I love everything about it.

Vicky considers herself being raised in South Florida as the main inspiration for her to get in fishing; for its abundance access of fishing areas and accessories. She is seen in her posts captured in several locations like San Lucas, Miami, Venice, and Everglades with her catch of different breeds

For more updates and news about your favorite celebs, do visit us at The Celebs Closet.