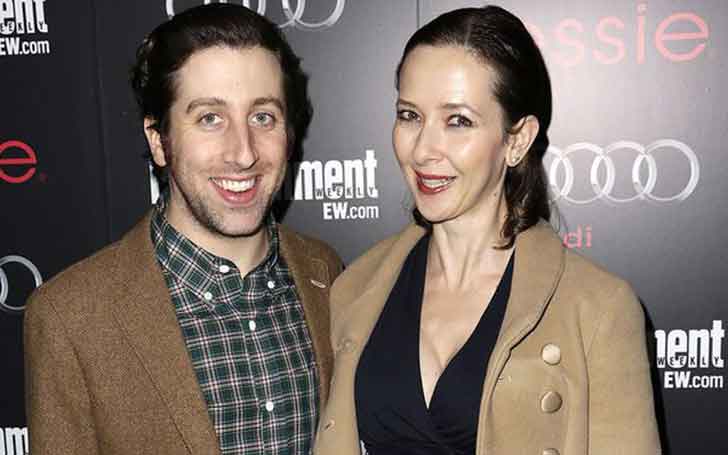 When one is in a relationship, he/she is bound to move a step forward with their life partner eventually taking their love to the next level. I guess everyone wishes to marry the love of their life but as we all know it’s not that easy as it sounds. Love can be confusing sometimes which can lead to couples questioning their relationship.

Similarly, the multitalented star who is best known for his role as Howard Wolowitz in the series The Big Bang Theory had a similar case when he dumped his wife after proposing to her before eventually marrying her. Confusing right? Not to worry, we’re here for your rescue. Scroll down the article to find out what actually happened and what was Simon up to.

The unusual love story of Simon Helberg and his wife!

With his charming and cute personality, the comedian-actor has managed to steal Jocelyn Towne’s and are one of the most cherished couples in Hollywood industry.

The duo has been married for seven years now with two adorable children. The huge fan base goes gaga over these lovebirds, but they have an unusual experience to share that happened before their marriage.

This news might come to you as a surprise, but Simon ended his relationship with Jocelyn after realizing that he wanted to marry her.

Without further ado let’s look into his interview with Mirror regarding the breakup.

“It’s sort of embarrassing. It’s about my wife and I and our break up before I proposed. I thought I would like to marry this girl, so, first of all, I’m going to systematically destroy my entire life and our relationship and lie and ruin all my friendships.”

“I freaked out, I thought I had feelings for other people, I thought that I needed more of an exciting life. I had the perfect thing but for whatever reason…It was an exercise in self-destruction.”

Simon realized his mistake after Jocelyn moved to Paris and hooked up with a new guy. Despite the heartbreaking past, Jocelyn gave Simon second chance and guess what now they are happily married and have two children daughter Adeline and son Wilder.

Simon Helberg’s contribution in Hollywood including his big hits!

Showered with many compliments and love Simon has a huge name in the film industry. He has grabbed attention through his brilliant and versatile acting skills and has never failed to portray a character perfectly. Having started his acting career in 1999 with the movie Mumford, Simon has never looked back since then.

I bet you know him as the famous character Howard from TBBT right? He even won the Critics Choice Television Award in 2013 for his role in the series. Despite TBBT he also has an extensive list of movies and TV shows which are a blockbuster. He has also done TV shows like Drunk and Studio 60 on the Sunday Strip, and the list goes on.

Simon’s remarkable net worth and his bio!

Born on Dec 9, 1980, Simon started his acting career by playing small roles in movies and TV shows, but it didn’t take long for him to be recognized in the showbiz industry.  With his famous role in The Big Bang Theory, he has grabbed the attention of many leading to many fans, followers, well-wishers, and admirers.

He is married to the director/producer Jocelyn Towne who is now the mother of two cute children. Simon has balanced his personal and professional life quite well so much so that his fans show a keen interest in the star’s lifestyle.

Best suited for the comic roles in movies Helberg is charming and cheerful in the off-camera as well. This famous comedian has a remarkable net worth of $45 million followed by a huge salary of $100 thousand per episode of The Big Bang Theory.