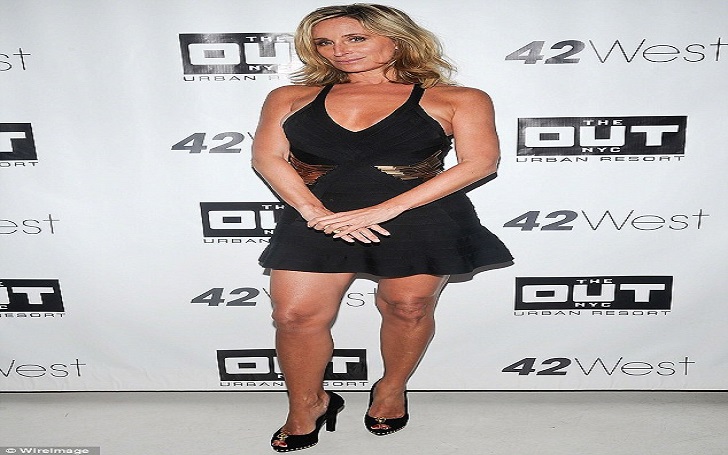 The beautiful actress from series “The Real Housewife of New York” star Sonja Morgan frequently came in media following her rumors and controversies. At this age, Sonja Morgan has maintained her beauty and persona and has various clothing line launched.

The Real Housewife of New York who frequently manages to be on the news, this time is on limelight for her extreme number of a boyfriend. Also, we will be giving the details of her failed married life with husband and what is the reason behind it.

Is She Dating Someone After Her Divorce With Husband!

The Real Housewife of New York City” girl Sonja Morgan recently revealed she is dating to the man called “Frenchie”, which seems like there is some serious relationship about them.

In an interview with entertainment tonight talking about her relationship she said:

” Yeah, how do I get into these things.”

“I made a list for myself, and my list was for people I could spend the rest of my life with and settle down, now that things are settled down for myself.”

However, elaborating how she wants to pass her life, Sonja said

“I wanted somebody who already had children.

She further did not explain about her relationship, but some insider stated that the couples are spotted many times together.

In an interview with Daily Mail, Sonja revealed about her ex-boyfriend ” Dominik Percy” a young model. And said:

“He has a whole world charm.”‘He’s worldly, well-traveled, elegant. He’s very well-dressed. He has a dandy style, which I like – very European!’.

Before Franchise and Dominik, Sonja was married to husband John Adams Morgan in1996. But later the couple had a divorce in 2006 which made a huge headline back then.

Sonja and her ex-husband John met at a restaurant in the 90s. The restaurant was the place where Soja used to work in her young days, and the interesting thing is that she got fired from her work due to John. Though the couple started off very romantically they ended their marriage with a divorce. The reason behind their divorce is stated due to financial problem.

About her Movie, fashion and modeling:

Sonja Morgan is one of the famous actor and model, Who is popular from her modeling dress and her acting from the” The Real Housewives of New York City.”

Sonja also worked as a producer in the movie named”The Man in the Attic” and “The Marsh”. Apart from that she also played in many tv series like” Access Hollywood” Fabife” Entertainment Tonight” Brunch with Tiffany” etc. Sonja Morgan is also a fashion designer and a model.

Born on  25 November 1963, in New York United States Sonja Morgan is a famous American personality best known for her role in “The Real Housewife Of New York.” She is successful in making her career best by her high level of acting. The beautiful actress and model Sonja organ have an estimated net worth of about $8 million.