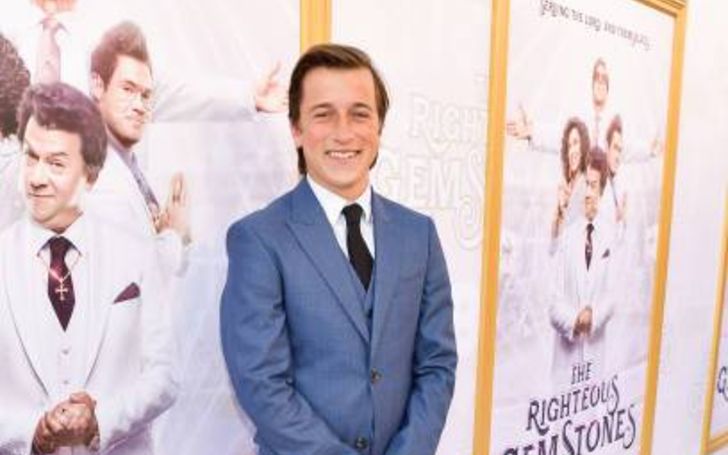 Winner of Young Artist Award for Outstanding performance in a TV series, The Bill Engvall Show, Skyler Gisondo is an American actor with 59 acting credits under his name.

The 5 feet 5 inches tall actor is best known for his role in the Netflix series Santa Clarita Diet. Well, we may know about his professional life but how is his personal life? Is he dating anyone?

The American actor Skyler Gisondo isn’t married yet but it doesn’t mean he is single. At the current moment, he is in a romantic relationship with his partner Ari Haagen.

Observing Skyler’s Instagram account reveals that the girlfriend and boyfriend are together since 24 July 2019. As on the same day, Gisondo wished his partner on their one year anniversary with a sweet caption.

In the caption, he stated:

One year around the sun. I’ve learned so much from you already. My goal in Year Two is for you to teach me how you keep your eyes open to a normal human size while smiling. Happy anniversary honey.

The loyal and smooth love-affair between Skyler and Ari can easily be seen through their pictures which have been uploaded on their official social media accounts i.e. Instagram & Facebook.

The sweethearts never hesitate to share the picture and show their relationship publicly. On 5 January 2019, Skyler posted the photo of his and his love kissing each other.

As of now, the lovebirds are living a happy life and they are not hurried to take their relationship to the next step.

Skyler Gisondo’s primary source of income is his acting career. Active since 2003, Skyler earns an average salary of around $56,183 per year. As of now, his wealth is estimated at around $3 Million.

Skyler’s some movies box office collection are listed below.

In additon, the actor has also played in the American detective comedy-drama television series Psych where the main character James Roday earned $60,000 per episode. Hence, Skyler might be earning in the same range.

Skyler has also played in other hit TV series including The Righteous Gemstones, Criminal Minds, Huff, and such other from where he earned decent paychecks.

Born on 22 July 1996 in Palm Beach County, Florida, Skyler Gisondo is the son of Ron Gisondo (father) and Stacey Gisondo (mother). His parents are ocean engineers.

Skyler’s last name comes from his paternal grandfather who was Italian American. In addition, his other three grandfathers were Jewish.

After completing his pre-high school education, Skyler homeschooled for several years. Later, the actor went to Milken Community High School in Los Angels and graduated in 2014.