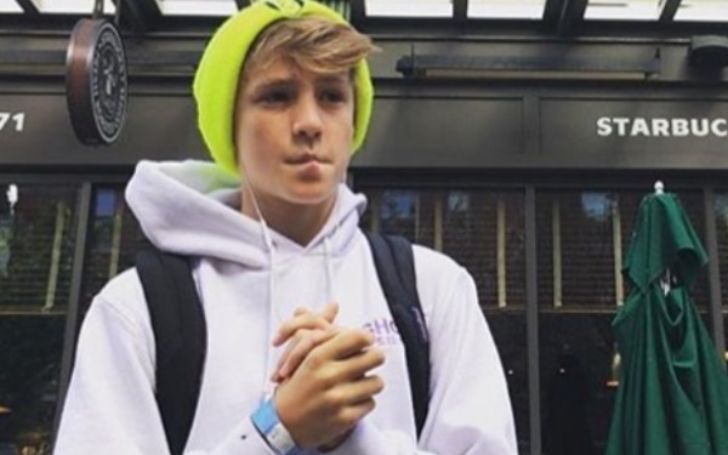 Magnus Paulin Ferrell is an American rising star who has played in the 2013 American comedy film Anchorman 2: The Legend Continues.

The 17 years old actor is also the son of a well-known actor. If so, who are his parents? Grab all the details down below.

We all know, Will Ferrell, the American actor, comedian, producer, writer, and businessman, and Viveca Paulin, Ferrell’s wife and also an actress. Well, Magnus was born to such stars on March 7, 2004. He was born under the birth sign Pisces.

As the son of Will, he became the grandson of Roy Lee Ferrell and Betty Kay Overman. Ferrell is also the nephew of Patrick Ferrell. Moreover, Magnus is also available on Instagram.

As for his nationality, Paulin is American and belongs to a multiracial ethnic background. He has his roots in English, Irish, German, Welsh, and Swede. His parents raised him along with his two brothers; Mattias Paulin Ferrell and Axel Paulin Ferrell.

Magnus Ferrell’s parents share a loving relationship with each other and are relishing a happy married life.

Will and Viveca met at an acting class in 1995. Eventually, after their first meeting, the couple became friends and after several years, their friendship took the next step as the two tied the knot in 2000. As of now, the husband and wife are living a happy married life for nineteen years. Moreover, in an interview with Elle, Ferrell stated what he loved about his partner is her sense of humor.

From their blissful conjugal relationship, the two became the parents of three children; Magnus, Mattias, and Axel. As of now, the family of five is living a happy life.

Despite being so young Magnus Paulin Ferrell has already made his career in the entertainment industry. He is an American actor who has played in a couple of movies. As of now, Magnus’ net worth is estimated at around $150,000, as per Playersbio.

Magnus played in the 2013 American comedy film Anchorman 2: The Legend Continues which was made of $50 million and collected $173.6 million at the box office. In the film, he shared the screen along with his father and other actors, Steve Carell, Paul Rudd, David Koechner, and so on. The American actor is in his rising phase so his net worth will surely grow up in the upcoming days.

Apart from Magnus’ wealth, he also enjoys his father’s fortune of $100 Million. The primary source of his income is from his multiple careers as an actor, comedian, producer, writer, and businessman.

Stay tuned to TheCelebsCloset to find out more about your favorite celebrities.