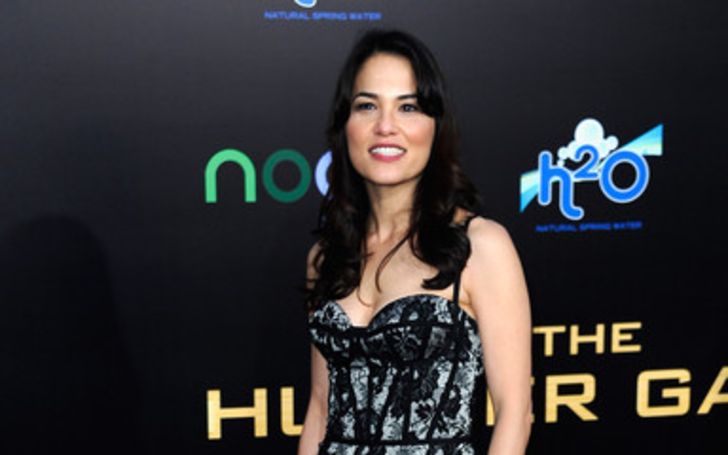 For over three decades now, Kimiko Gelman has been enthralling the audiences with her enchanting beauty performances in the field of entertainment. After her performances in T.V. Series like Rags to Riches and on movies like The Hunger Games, no wonder, she is one of the well-liked figures in the industry.

Many people wonder about her personal life which is far from noticeable in the public. So, is Kimiko married? The answer is yes, well, then, who is her husband? Does she have any children with her partner? Get to know all in details right here!

Who Is Kimiko Gelman?

Kimiko Gelman is an American actress who is famous for her performances in the movies like Mother (1996), Billy’s Hollywood Screen Kiss (1998), The Hunger Games franchise, and few others.

On the television screen, she is popular for her character Rose in the series Rags to Riches. In the late 80’s comedy-dream series, she acted alongside Joseph Bologna, Douglas Seale, and Bridget Michele. Quick facts: she is the granddaughter of American artist Aaron Gelman.

Who Is Kimiko Gelman Married With? What About Her Kids?

Kimiko is living a happy married life with her husband John Prosky. Her spouse is also an American actor who is famous for his on-screen roles such as The Nutty Professor, Straight Outta Compton, and Gods and Generals.

The couple tied the knot in the gathering of their respective families and close friends on September 17, 2000. More than 18 years into marriage, the duo shares an impeccable bond and there seems no rumors or controversies in their relationship.

You May Also Like: Actress Anchal Joseph’s Personal Life And Relationship Status!

The Rags to Riches star, moreover, shares a son, Joe Prosky with her husband. However, she likes to maintain the personal details about her family as minimum as possible in order to live a quiet life. She spends most of her time with her teenage son and spouse and looks happy and content.

As for her social media presence, Kimiko is active on social media like Facebook and Instagram. Likewise, she shares pictures with her family, friends, relatives, and co-stars on it.

Previously, Kimiko Gelman was in a marital relationship with Jeff Cazanov. But when the two tied the knot and how they divorced is still a mystery to the public. The Mother actress had no kids with her former husband and they separated a few years after tying the knot.

How Much is Kimiko Gelman’s Net Worth?

Kimiko Gelman has a net worth of $2 million which she gained through her many years in the acting business. The average salary of an American actor in the US is $39.84 per hour and around $56,103 in a year.

The lady was a part of several movies which were a box-office sensation and well received among the audience. For instance, The Hunger Games franchise (2011-2015) where she portrayed the role of Venia.

The dystopian science fiction adventure film produced on a total budget of $508 million managed to accumulate a mountainous $2.968 billion at the worldwide box office collection. Moreover, she shared the screen with Hollywood’s top actors like Jennifer Lawerence, Josh Hutcherson, Liam Hemsworth, and many others.

Check out the trailer of Kimiko Gelman’s movie The Hunger Games!

No doubt, Kimiko received a handsome paycheck from her service in such hit movies. Surely, she lives her life without the need to worry about anything, well, materialistic things at least.

Kimiko Gelman stands at a height of 5 feet 6 inches (1.68 meters). Similarly, her eyes are dark brown while her hair is black.

Where and when was Kimiko Gelman born?

What is Kimiko Gelman’s ethnicity?

What nationality does Kimiko Gelman belong to?

Which is Kimiko Gelman’s debut movie?

What is Kimiko Gelman’s eye color?

Which color hair does Kimiko Gelman have?

How tall is Kimiko Gelman?

Don’t Forget to visit thecelebscloset for more celebrity Entertainment and their latest News!!!