Kendall Jenner has a rapper boyfriend? Who is this queen of Instagram dating? Know more about her plastic surgery, bio and net worth 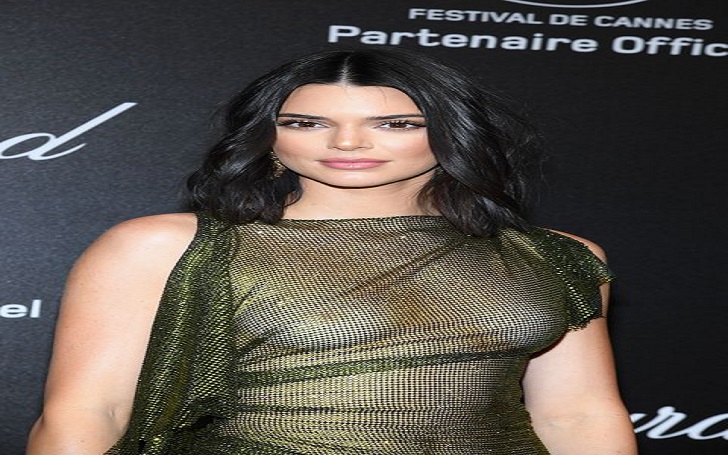 With Goddess-like beauty, supermodel Kendall Jenner has always been able to rule in people’s hearts. Her perfectly structured face combined with her curvaceous body makes her dream woman of every man out there. But is our Kendall on her way to find her dream man? Oh wait, has she already found one by chance?

Let’s get to know more of who is Kendall Jenner dating and if that man is her boyfriend or not. Also read this further to know about her tattoos, plastic surgery, Instagram and net worth.

Kendall Jenner stunned us all with her styling sense in the Met Gala 2017. She wore a black shimmery dress which left very less to the imagination and yet was sexy in all manners. She may have arrived separately but she was seen later on in the arms of the rapper A$AP ROCKY in such cuddly way that we strongly believe that they are dating.

If this photograph above looks as though they are friendly and could even be just friends then we have another one posted by Kendall’s sister Kim in her snap chat stories. In this photo, they certainly look like a couple to us.

In the background, we can see Kendall Jenner and ASAP ROCKY getting lovey-dovey with each other which definitely looks like they are dating. Sources have revealed that Kendall isn’t that serious about calling him her boyfriend and they aren’t exclusive or anything but they are falling for each other.

She told in an interview,

We may be able to get more updates on this couple very soon. We also hope that they become exclusive and date each other because they look extremely good as a couple together.

As of 2019, everything is over for Jenner with Rocky. She is dating a new boyfriend whose name is Ben Simmons.

Kendall Jenner is natural beauty even without all her make up. But back in November, when Kendall deleted her Instagram account and came back with plump looking lips, everyone started going frenzy with comments like she underwent plastic surgery for her lips. People claimed that she did the same as her sister Kylie Jenner and made her lips look bigger with plastic surgery.

But Kendall clearly denied the rumors. She said that it wasn’t plastic surgery but the famous makeup trick of her beloved sister Kylie called “Lip Over-lining” which made her lips look big. She felt terrible about it and said in an interview,

“All of a sudden, photos of us came out with headlines like, ‘OMG Kendall got her lips done and got full facial reconstruction—look at her cheekbones, look at her nose!’ I was like, this is CRAZY. I didn’t even address it at the time. Because if I address it, people are going to be like ‘Oh, so she’s defending herself—she must be guilty.’ Kylie saw it all unfold and felt bad, so she went on Snapchat and took the blame.”

Even though she denies having gone through surgery, her fans are still adamant about it. We think that she looks brilliant either way.

Kendall Jenner also sizzled back to the headlines for her amazing inner lip tattoo. She has three tattoos in her body all of which are pretty small in size. She has a broken heart tattoo which matches with her best friend Hailey Baldwin.

Her next tattoo is a white dot which is also on her fingers. It was done by this remarkable tattoo artist named Jon Boy.

And finally, the tattoo that caught everyone’s attention is her inner lip tattoo with words “Meow”.

It is clear that she tries to have her tattoo as secluded and small as possible because she is a supermodel and it would obviously come in the way of her career.

Kendall Jenner wiki like short bio and net worth:

American supermodel Kendall Jenner’s full name is Kendall Nicole Jenner. Her bio reveals that her birthday is on 3rd November 1995. She was exposed to the world of entertainment at an early age. Her family, “The Kardashians” had an E! news reality show called “Keeping up with Kardashians” on the set of which is where she almost grew up. Today she is a successful model with millions of fans on her Instagram account. She has done projects with big fashion industry companies like Vogue, Harper Bazaar, Victoria’s Secret. etc.

Her success has surely elevated her net worth as her annual income itself was estimated to be around $4 million dollars. Her net worth by 2017 is surely impressive as it is almost two times bigger than what it was last year. Her net worth as of 2017 is $36 million which is mostly from her modeling and advertising projects.