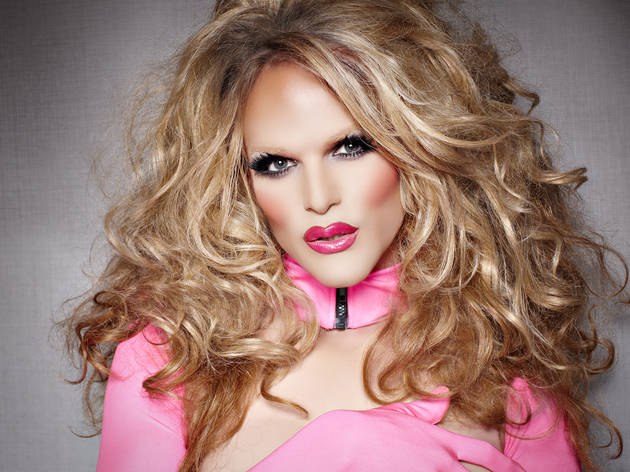 Art has no constraints! There were times when people used to sit back and applaud drag queens for being brave enough to alter themselves for the sake of entertainment. At present, there are only a few drag queens around the world. One of them is Willam Belli.

The American actor, drag queen, model, singer, and author Willam Belli is famous as the barred contestant of the fourth season of RuPaul’s Drag Race. His role in Ryan Murphy‘s medical drama Nip/Tuck as a transgender woman, Cherry Peck, won millions of hearts.

In addition to acting, he found viral success with his music video parodies with his Los Angeles drag queen pop trio DWV. Nevertheless, the group split in June 2014 due to personal conflict.

Now, the entertainer has embarked upon YouTube too. Many fans are quite curious to know who Willam Belli husband is along with his married life. Also, find the figure of Willam Belli net worth.

No matter which personality Willam Belli shows, either it is a good-looking man or a drag queen, there is an equal amount of admirers for both. However, Willam is already out of the league.

You Might Also Like: Is NCIS: New Orleans’ Star Shalita Grant Dating Or Married Someone Already? Exclusive Details Along With Her Net Worth!

At the age of 19, Belli met his future husband, Bruce Bealke. They got married on September 9, 2012, in California. His spouse is a lawyer and a software developer. He does not hesitate a bit to express his love for his husband.

Nevertheless, Willam Belli husband is the main reason behind his disqualification from the 4th season of RuPaul’s Drag Race. He used to receive conjugal visits from his husband that was against the rules of the show. But that exclusion from the show is perhaps the best thing ever happened in his showbiz career.

As of now, Belli and his spouse are out of any kinds of divorce rumors. The duo together doesn’t have any children until now. They have set an example to young gay couples to have faith upon love and make it long lasting.

Additionally, Belli has his own YouTube channel that has amassed over 866k subscribers. In 2017, he launched his first perfume collaboration with Xyrena named Scented by Willam.

From all the endorsement deals with American Apparel, Sephora, Obsessive Compulsive Cosmetics, Magnum Ice Cream, and others, Willam Belli net worth must be in millions.

Read More: Famous For Her Twerk Videos; Does Youtube Star Lexy Pantera Have A Boyfriend? Is She Dating Someone Or Secretly Married?

Darg queen William also worked in several movies and TV shows from where she earns an amazing net worth. His 2018 movie, A Star Is Born collected $400.1 million at the box office. The movie was made with a budget of $36-$40 million. As per William, he was paid for sex when he was 17 by eight Republicans. IMDB rated the movie with 8.1 stars.

The first acting credit of Willam was in 2002 in The District 2002 as Bart Jaker. Later, he appeared in various TV series such as The District, Boston Public, Cold Case, The Shield, and My Name Is Earl. His notable character was the transgender, Cherry Peck in Nip/Tuck.

In 2008, Belli featured in the song “Breakin’ Up” by Rilo Kiley and Rihanna’s music video “S&M” in 2011. In 2011, he joined the fourth season of RuPaul’s Drag Race. Before disqualification, he won the main challenges in the episodes “Float Your Bloat” and “Frenemies.’’

On March 12, 2012, his first single “Trouble” premiered on Logo TV. He came into YouTube world with a series titled “Willam’s Beatdown” in December 2012. In January 2013, he experienced 20 million hits on YouTube for the song “Boy Is a Bottom.’’ He also appeared on Lady Gaga’s lyric video for her single “Applause.” In 2016,  Grand Central Publishing published Belli’s first book Suck Less: Where There’s a Willam, There’s a Way.

Willam Belli was born on 30 June 1982 in Philadelphia. Therefore, he is currently in his 36 years of age.

Regarding his parents, his father used to work at the Kennedy Space Center. He grew up in Florida and did his schooling from there. Many might not know this, but he is a nephew of the television director Mary Lou Belli.

During his childhood, Belli was overweight and turned into a vegetarian to lose some extra pounds.

Read More: Is Big Chief Justin Shearer Divorcing His Wife Alicia Shearer Or Not? Get The Exclusive Details Here!

Furthermore, regarding his origin, Belli is of mixed ethnicity having Yugoslavian and Italian heritage. So, how tall is William Belli?

The height of stilettos makes Belli look much taller. However, his actual height is 5 feet 10 inches.