Skip to content
Home » Entertainment » Who is Emma Gonzalez Dating? Know her Professional Career and Achievements

Who is Emma Gonzalez Dating? Know her Professional Career and Achievements 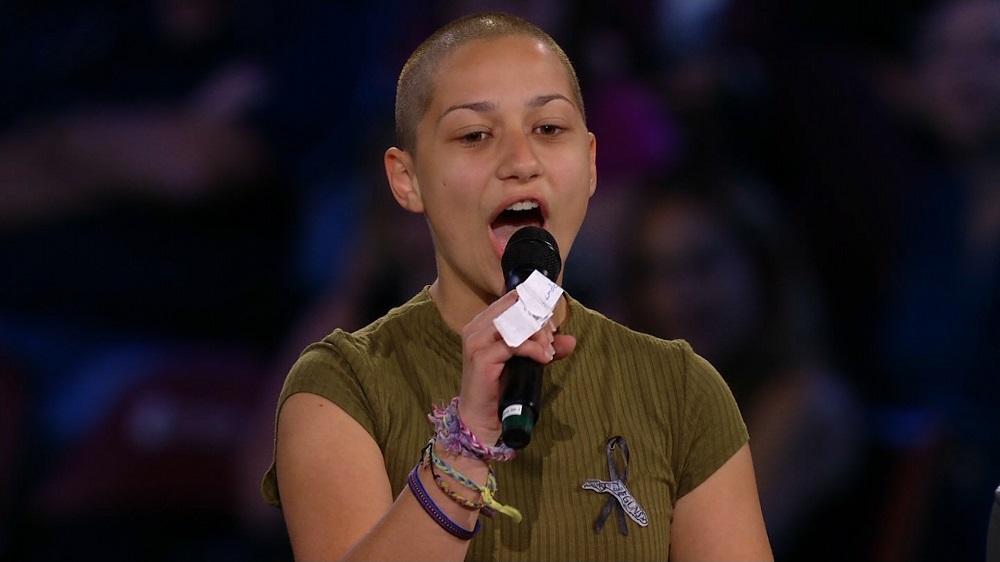 One of the famous American gun control activist Emma Gonzalez is a survivor of the February 2018 Stoneman Douglas High School shooting in Parkland, Florida. Around 17 people lost their lives and several people getting severely injured in the shooting case.

After being the survivor, Gonzalez co-founded the gun control advocacy group named Never Again MSD. Have a look at Emma Gonzalez’s personal and professional career. So, how did Gonzelez came into the fame? Get to know everything below:

Who is Emma Gonzalez Dating?

After Stoneman Douglas High School student and gun attack survivor Emma Gonzalez made into the headlines for her moving call-to-action at a gun control rally after shooting at her school, people have been keen to know about her personal life.

Though Gonzalez has not made any news about her private life, sources claim that she is openly bisexual. Moreover, she is the president of her school’s Gay’s Straight Alliance (GSA.) 18 years old Gonzalez is new to activism and opened up about sexuality.

Well, the information regarding Emma Gonzelez dating relationship is still not disclosed. While checking out her Instagram, we can find her pictures with several guys. It looks like she is having a good time with her friends.

It was back on February 17, 2018 when Emma Gonzalez delivered 11 minute long speech at the gun control rally in front of Broward County Courthouse in Fort Lauderdale, Florida. Her speech was all about the emotion and reaction to the deadly shooting at her school, that she had witnessed.

Gonzalez’s speech which has featured a call and response “We call B.S” in response to the gun laws went viral within a few time.

Gonzalez along with other survivors spoke with Florida State Legislators in Tallahassee on February 20, 2018, on how the gun control was the need for within an hour. She along with her friends watched the legislators vote down debate on the existing gun control bill.

In an internationally televised town hall hosted by CNN on 21 February 2018, Gonzalez and her fellow students criticized NRA and politicians accepting money from them. She pressed one of the NRA representative, Dana Loesch, to answer all of her questions.

Similarly, in an interview with Ellen DeGeneres on 23 February 2018, Gonzalez revealed that she came up with the slogan “We Call B.S.” as she felt that the message would best resonate through the repetition.

Besides this, Gonzalez was even featured on Time Magazine’s March 2018 issues’ cover. She got a chance to be featured alongside fellow activists like David Hogg, Alex Wind, Jaclyn Corin, and Cameron Kasky. Similarly, she was also profiled by France24 in the same month.

Gonzalez with her students including Parkland survivors David Hogg, Sarah Chadwick, and Cameron Kasky organized and participated in a nationwide protest “March of Our Lives.” During the protest, she spoke for six minutes which is the length of time of the Parkland shooting.

Gonzalez also paid tribute to the victims by calling out their names and the things they would never be able to do and cherish them again. In the same way, while speaking with MSNBC, she requests people to vote for the change and to “empathize rather than feel apathy.”

After all those march and protest of Gonzalez and her fellow students, the Florida Legislature passed a bill titled as “Marjory Stoneman Douglas High School Public Safety Act.”

The bill passed announced that the minimum age for buying the firearms to 21, made waiting periods, and background check. Florida Governor, Rick Scoot, signed the law that allocated $400 million for the implementation on 9th of March, 2018.