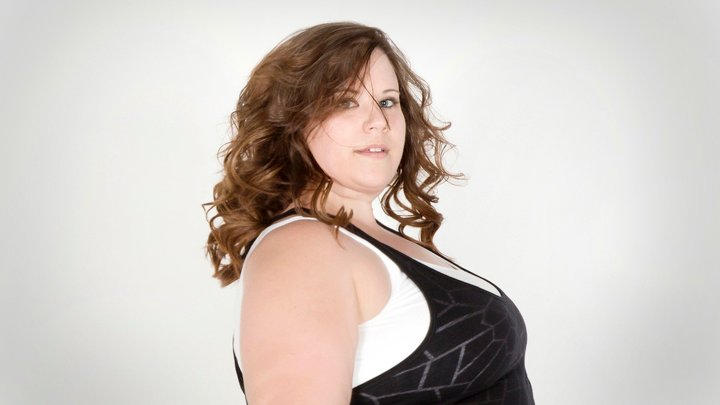 Beauty comes in all sizes.

There is a misbelief that a woman looks beautiful only when she has a toned figure. People find it hard to accept that curves are even more attractive. While the whole world was racing to have a slim and perfect figure, there came Whitney Way Thore who slammed the critics with her elegance and love for her body. Despite being overly weighty, the American TV personality embraced her imperfections and confidently encouraged many women to do so.  Afterward, she amassed millions of followers and been part of the show called My Big Fat Fabulous Life on TLC network.

Read more: Who is Phora Dating? Know his Dating History, Net Worth, Earnings, Career, and Wiki-Bio

Whitney Way Thore Engaged: Who is Her Fiancé?

It doesn’t matter what size you have when you are in love with someone special. No matter how hard Whitney’s life was, her boyfriend never let her feel belittle.

Previously, Whitney was dating her then-boyfriend, Lennie All hat. However, they did not work out as a couple. But the one thing that she never questioned was him being a wonderful boyfriend. Apart from that, she went through a devastating situation after finding out about being in a relationship with an engaged guy.

After Whitney’s breakup with Lennie, she began dating Avi Lang. The two met via online. However, after dating for six months, she figured out that Avi Lang was engaged to his fiancée, Nada Louis. Poor Whitney never doubted his hesitation to appear in the show.

Lately, in January 2018, Whitney and Nada Louis got rid of the womanizer from their lives. ThoughWhitney found it hard to digest everything at first, later she created a support group of over twenty women.

As of now, Whitney has not been involved in any romantic affairs. Currently, Whitney is single and focusing on her weight-loss.

Back in 2016, Whitney invited pregnancy rumors herself after she slipped off about being pregnant in the season four of the show. That time was hard for her, as she had just broken up with Lennie All hat. Though they had split, Whitney’s ex, Lennie was ready to take the responsibility of a father but not intended to get back together.

However, the pregnancy rumors turned out as a false alarm after she visited a gynecologist and discovered she was never expecting a baby.

Recently, Whitney opened about her desire to be a mom in an episode of My Big Fat Fabulous Life. She was considering adoption with her gay best friend, Tal Fish. She has polycystic ovary syndrome.

The lady earns around $5 thousand to $10 thousand per episode from her appearance in My Big Fat Fabulous Life. For her low-end projects, she makes around $1500 to $3000 per epidose with an increase up to $7 thousand or $10 thousand an episode.

With her successful tv shows, she has amassed around $1.5 million as of 2020.

After Whitney returned to the U.S. from Korea, she worked as an on-air producer of Jared & Katie on 107.5 KZL. In 2014, the show uploaded a dance video titled “A Fat Girl Dancing” on their YouTube channel. Rapidly, it went viral, and she grabbed immense popularity for promoting body acceptance and positive body image.

Following that, Whitney was featured on ABC News, NBC’s Today Show, and The Huffington Post. In 2015, her show My Big Fat Fabulous Life that was about her life and her mission to lose weight aired on TLC. She created her website to aware people about “no body shaming.” In May 2016, she released her biography – ‘I Do It with the Lights On And 10 More Discoveries on the Road to a Blissfully Shame-Free Life.‘

Whitney Way Thore was born in 1984, in Greensboro, North Carolina to her American parents Glenn and Barbara Thore. She has an older brother, Hunter.

In 2000, the Governor’s School of North Carolina of Meredith College accepted her application for the Theatre Summer Enrichment Program. She completed her schooling from Page High School in 2002. Later, she went to Appalachian State University to study Theatre. After her college, she moved to South Korea and taught English to school children.

Whitney celebrates her birthday on April 14 that makes her age 34. She is of white ethnicity.

Whitney has a decent height of 5 feet 2 inches with a body weight of 170kg.