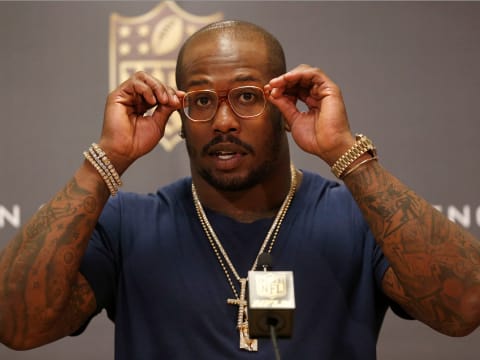 As the clock strikes 12 in the first of April, people wait to make a fool out of you.  Most of the people are aware of the first rule of not believing anything one reads on April Fool’s Day. However, some of the people still, remain clueless about what is happening to them. The same thing happened in this April first. Some Broncos fans didn’t get that message, which led to an exciting situation after their Von Miller, an American football outside linebacker, made an Instagram post.

Von Miller decided to make prank his fans, so he announced that he traded to the Browns on his Instagram uploading a photoshopped picture.

It’s been real Denver! The “Mile High City” and the @broncos will always have my heart! SB50 Champs! They can never take that away from us! @clevelandbrowns & @juice_landry what’s good!!!

The Broncos player who was out with a knee injury played a match on Sunday against the Texans. Miller was injured in the Week 13 while playin a match against Chargers.

In the game with Texans on December 8, 2019, Von showed some defensive snaps with only three total tackles in the whole game. Team coach, Vic Fangio stated that Miller came out of the game at a good time as he seemed better. He also believed that Von was at 80 percent in the game yesterday but he will surely get to 90 within this week.

Von Miller is not a married man and he didn’t have any kids till date. He is currently single at the moment but previously, Miller has dated few girls.

There were rumors about him dating Rona Gonzales who is a model. However, the couple hasn’t revealed much about their personal life to media. They kept their relationship private and out of attention.

Also see: How much is Jalen Ramsey’s Net Worth? Know his Earnings, Income, Contracts, Dating Life, Girlfriend, Daughter, and More!

Von Miller was also allegedly dating R&B singer K. Michelle in 2017. Apart from that, he also struggled rumors with his Mexican girlfriend, Elizabeth Ruiz who threatened him to release their sex tape.

Ruiz made a video during their intimate moments. Later, she threatened to make it public unless he gave her $2.5 million.

As we all know, how successful Von is, we can assume that he enjoys a pretty good salary and a pleasant net worth. The current figure of Von Miller’s net worth is estimated at around $30 million.

You May Also Like: NFL Player Deshaun Watson Injury & Career Stats | Net Worth & Salary | Dating Someone?

Von Miller receives a massive salary from Denver Broncos. He currently receives $15 million annually. He signed Denver Broncos of a 6-year deal for $ 114.5 million and is expected to make $70 million from his team.

Miller also owns a chicken farm and he is planning to build a Von’s Vision Foundation which focuses to build an eye care center and eye wares for underprivileged children.

Von Miller was born on March 26, 1989, in Dallas Texas to Von Miller Senior and Gloria Miller. His family is a fanatic of sports as both of Von parents were athletes as high schoolers. Von grew up with his little brother named Vinsynzie.

Miller named District 8-5A Defensive MVP after making 76 tackles, 14 tackles for loss and six sacks in his senior days of school.

Von Miller went to Texas A&M University from where he has a major in poultry science. From 2007 to 2010 Von played for the Texas A&M Aggies football team.

After he passed on his senior season, Miller was expected to be a second-round pick in the 2010 NFL Draft. NFL Draft selected him in 2011 where he was one of the best 3–4 outside linebackers available by NFL draft experts.

In 2011, Von Miller signed to Denver Broncos second overall and he is the highest selected linebacker after LaVar Arrington to the Washington Redskins. He also becomes the Aggies’ most top draft pick since Quentin Coryatt, the assortment of Miller made sure of his authorities. Von Miller participated in season 22 of Dancing with the Stars.

Miller paired up with professional dancer Witney Carson on March 8, 2016.  After a year, he named sixth Pro Bowl and Pro Bowl defensive MVP in 2018.

Von Miller recently celebrated his birthday at the age of 29. He belongs to American nationality and black ethnicity. His zodiac sign is Aries and he is a Catholic by birth.

Von Miller has the height of 6 feet and 3 inches and he weighs around 115 kg. He wears Jersey with number 58. His Instagram account has about 1.3 million followers.