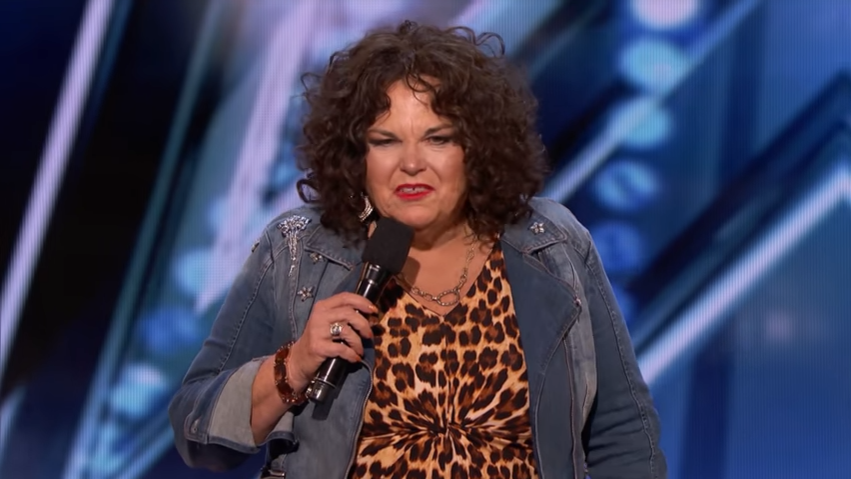 Who do you think will win America’s Got Talent 2018?

In the herd of talented artists, the competition is getting tougher day by day. However, along with the judges, maximum numbers of audiences are tunned with the hilarious stand-up comedian, Vicki Barbolak.

Vicki confidently stripped in front of millions of audiences on live TV. The judges and audiences honored the Trailer Park Nasty comedian with a standing ovation during the NBC reality show’s live performance. The way she whipped off her silk robe to reveal her floral bathing suit was entertaining. But will Vicki Barbolak be the next America’s Got Talent winner?

Read more: Duo Transcend Has Made It To Finals: Soon-To-Be The Winner Of AGT 2018?

Vicki Barbolak is a 58 years old stand-up comedian, hailed from Oceanside, California. At the age of 38, she saw an ad for a stand-up comedy class. Her decision to join the class changed her life. Later, she realized that her real happiness lies in making people laugh.

RETWEET if you think @VickiBarbolak should win #AGT tomorrow. pic.twitter.com/w18MhTwu2Z

Afterward, Vicki started doing open mic nights. Later, the wing of Mitzi Shore, owner of ‘The Comedy Store’ found her and established her as a Comedian. Within twenty years, she has transformed herself from an ordinary homemaker to an outstanding comedian. Her comedy primarily reflects life as Mom, marriages, and her unconditional love for the Southern California Trailer Park Lifestyle.

The fame which Vicki Barbolak was searching for the past few years finally honored her after she auditioned for America’s Got Talent, 2018. From a region to the whole world, her comedy shines. After her hilarious performance, Vicki received a standing ovation from the judges, Mel B, and Howie as well as the live audiences on season 13 of America’s Got Talent. Howie said:

“I have always felt that there’s this huge void for female comics since Joan Rivers is no longer with us. You know something? Tonight, in this moment, you just filled that void. You really did. You’re so wonderful.”

As Vicki has made it to the finals, we have to wait to see if she wins this year’s AGT.

Vicki is a married lady. However, she hasn’t reflected a single word about her husband and marriage. Keeping her age in mind, she must have children and grandchildren too. She recently tweeted thanking her husband, children, and grandchildren for being her ultimate support.

Tomorrow, I will wake up knowing I GAVE all I have to give. I will have my wonderful husband, children, grandchildren, family and friends by my side and a whole new world of people to meet who appreciate my comedy! YES! I love being the #PeoplesComedian! #TeamVicki Please vote. pic.twitter.com/BAohr4fRiI

Apart from comedy, Vicki performs official duties at weddings and offers complete Wedding Chapel to-go packages. Perhaps, it might be the inspiration behind her comedy. None of her Instagram posts includes photos of her husband. One of her daughters’ name is Lily Gross.

My last goodbye with mama before the show! @vickibarbolak @agt

As of now, Vicki is sharing a blissful marital life with her unknown husband and their family.

America’s Got Talent isn’t the only show Vicki Barbolak has been part of. She is a member of Jay Leno’s NBC Laugh Squad. She won The Search For The Funniest Mom in America on Nick @ Nite. E! Television also featured Vicki as the next star from The Comedy Store.

Time and again, Vicki has proved that comedy is in her blood. She is as funny as she performs on America’s Got Talent. Even though she started the comedy in her late thirties, she is killing it. She told:

“I just can’t believe it’s all happening. I have been doing this for twenty years all over San Diego. I’d be happy if I never got out of San Diego much.”

Vicki is also an actress and writer. She has appeared in Pickin’ & Grinnin in the year 2010. In 2003, she did the movie Call Me Crazy. She was in the movie Accidentally on Purpose too.

Vicki Barbolak was born in Oceanside, California. Her father’s name is Peter “Pete” Barbolak. Her age is 58, but she hasn’t revealed her exact birthdate.

She is American by birth. However, her ethnicity is unknown.