Insight into the Life of the Human Barbie – Valeria Lukyanova 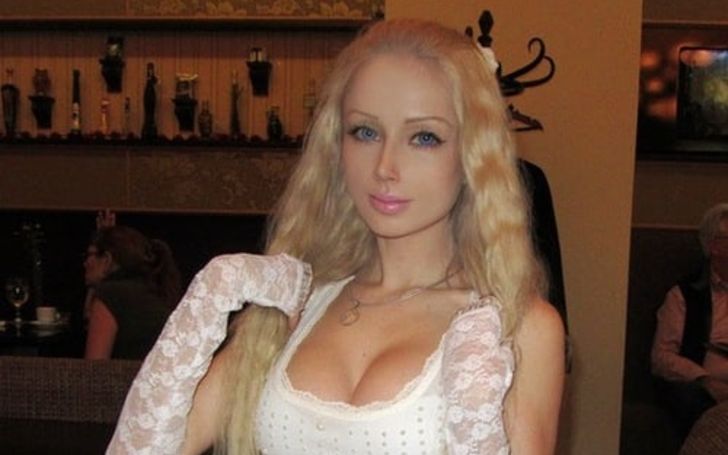 You might think there is only one Barbie, but you are wrong. Over the past couple of years, there has been a growing number of human Barbies, including the likes of Valeria Lukyanovam, Alina Kovalevskaya, Lacey Wildd.

Among them, today, we are going to talk about Valeria Lukyanovam, who is known for her doll-like features, which she achieved through make-up and probably plastic surgeries.

Valeria Lukyanovam, a beautiful star, came into limelight after used makeup and contact lenses over her naturally green, gray, blue eyes to look just like Barbie. Valeria pulled in a number of fans after turning into a human doll using plastic surgeries and thick layers of makeup.

With her weirdly fantastic look, Valeria believes she has become a living, breathing Barbie. She also joked that she is from another planet, possibly Venus.

While many other human dolls perform plastic surgeries on their faces, Valeria hasn’t stated anything about such. However, she has revealed that she had had breast implants and nothing more.

Valeria encourages women through her social media to flourish their natural beauty. She is also a fitness lover and claims to have that irresistible body all because of her gym workouts and particular diet.

Earnings of the Human Doll

The 27 years old Valeria Lukyanova is a Ukrainian model and entertainer who has amassed a net worth of $500,000. She earns a hefty amount of cash from her modeling career just like Justin Jedlica or Pixee Fox.

Valeria is also the winner of the global Miss Diamond Crown of the World competition. The pageant was open to all but she became the victor.

In 2015, Lukyanova also participated as a model in Dosso Dossi’s fashion show. The 5 feet 7 inches tall model had multiple photo sessions during the show, which ultimately added to her worth.

Luckyaova also adds some amount of money as an opera singer and has recorded two albums, Sun in the Eyes. She also wrote a book, Astral Travel Amature.

The star also earns decent bills from her YouTube channel. Her channel has 214 thousand subscribers and has 46,259,530 video views. The channel makes monthly earnings of between $38 – $604, which enables her to make annual revenue of between $453 – $7.2 thousand out of the channel.

The beautiful model, Valeria Lukyanova, is married to her childhood boyfriend turned husband, Dmitry Shkraboov. By profession, her partner is a Ukrainian Businessman. The pair shared their wedding vows in a private ceremony.

Valeria’s lover Dmitry is supportive of her as he agreed to an open relationship and also agreed not to share any children.

Victoria also revealed that her husband turned into a strict vegetarian way before she did and what’s more is that he is fond of mountains. As a mountain lover, the duo has also been to Nepal to visit Everest and the other Himalayan Mountain Ranges.

Do follow Thecelebcloset to know more about your favorite celebrities.