Actor Val Kilmer Finally Confirms His Oral Cancer! A Scoop on His Health and The Rumor of His Death. 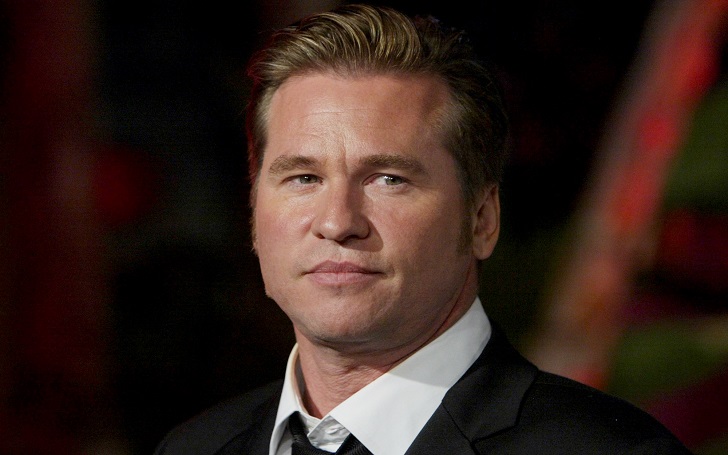 Fans are always curious about their favorite celebrity’s health. They become sad even if their favorite actor dies; On-screen. The worse health condition of an actor worries their fans and admirers. So did the health of former Batman star Val Kilmer.

The American actor, Val Kilmer, had a serious health issue a couple of years ago. A rumor that he got a tumor in his throat spread so quick. But he always denied the rumor. Were the rumors true? Had Val had oral cancer? Let’s find out the fact regarding his health condition and also know more about his personal life:

Val Kilmer Confirms Oral Cancer and Says He Has ‘Had a Healing.’

In January 2015, actor Val Kilmer got admitted to a UCLA Medical Center after he bled from the throat. A source told TMZ that Val has a tumor in his throat. But later, Val denied and said he had no tumor on his neck through his Facebook page. 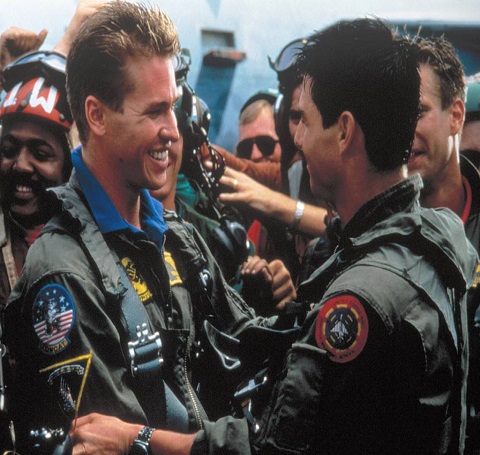 While speaking to Jonathon Ross about the film The Ghost and the Darkness, Michael Douglas revealed Kilmer’s oral cancer diagnosis. And claimed:

His co-star had not come in public recently due to Kilmer “dealing with exactly what I had, and things don’t look too good for him.”

Douglas had stage 4 oral cancer, diagnosed in 2010 but later declared cancer-free in 2011, following the treatment. Kilmer also denied the allegations made by Douglas.

Val Kilmer had a terrible weight loss, and many believed the reason behind his weight loss is his cancer. During his Reddit AMA on April 2017, a fan questioned him:

“A while ago, Michael Douglas claimed you had terminal cancer. What was the story behind that?”

As an answer, Kilmer replied:

He was probably trying to help me cause press probably asked where I was these days, and I did have a healing of cancer. But my tongue is still swollen altho [sic] healing all the time. Because I don’t sound my normal self yet people think I may still be under the weather.

“A healing of cancer” doesn’t signify anything clinically but it reflects the honesty of Kilmer admitting that he has had cancer. After two years, he finally revealed himself of his oral cancer.

Val Kilmer cares about his family a lot. He loves his kids and has fun together whenever he gets time. Val had a beautiful wife, actress  Joanne Whalley. The couple married in March 1988.

Joanne gave birth to two children: a son Jack Kilmer born on June 6, 1995, and a daughter Mercedes Kilmer born on October 29, 1991. The relationship between Kilmer and his wife didn’t go well, and they finally separated in February 1996. 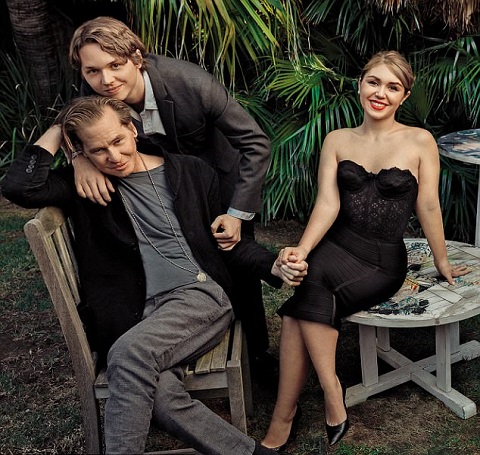 Caption: Val Kilmer with his son Jack and daughter Mercedes.

Kilmer is very close to his daughter and son. He often talks about his children on social media: Twitter and Facebook. He is a great father to his kids.

Recently, the news of Kilmer’s death spread too quickly causing concern among fans and admirers across the world. Rumors of his death embroiled after a ‘R.I.P. Val Kilmer’ Facebook page successfully attracted nearly one million ‘likes.’ Hundreds of Kilmer’s fans immediately started sending their messages of condolence on the Facebook page, expressing their sadness that the 57-year-old actor was dead.

However, Kilmer is alive today as well, and the rumor was completely a death hoax.

As of now, Kilmer recently portrayed an American writer Mark Twain on his one-man stage show  Citizen Twain on May 2017. Kilmer found challenging to describe the role of Mark Twain on the stage.

A Short Bio of Val Kilmer:

The Date of Birth of Val Edward Kilmer is December 31, 1959, which makes his age 57 at present day. His hometown is Los Angeles, California, U.S. According to the Wiki, his parents got divorced in 1968. Kilmer attended a Christian Science school, Berkeley Hall School in Los Angeles, until ninth grade. He also attended Hollywood Professional School.

Kilmer cast in several movies: Real Genius, Top Secret, The Doors, Batman Forever, The Saint, 5 Days of War, Song to Song and much more. He also does charity and social work. Kilmer is also a supporter of Native American Affairs.

Recently, Val Kilmer has appeared in a ton of movies including 1st Born, Soldier’s Heart, and Top Gun: Maverick. Besides his acting career, he has also given his voice to a video game, Spider-Man: Edge of Time.

Kilmer has earned his net worth by acting in movies, stage, and Television. As of 2019, his estimated net worth is about $25 million.