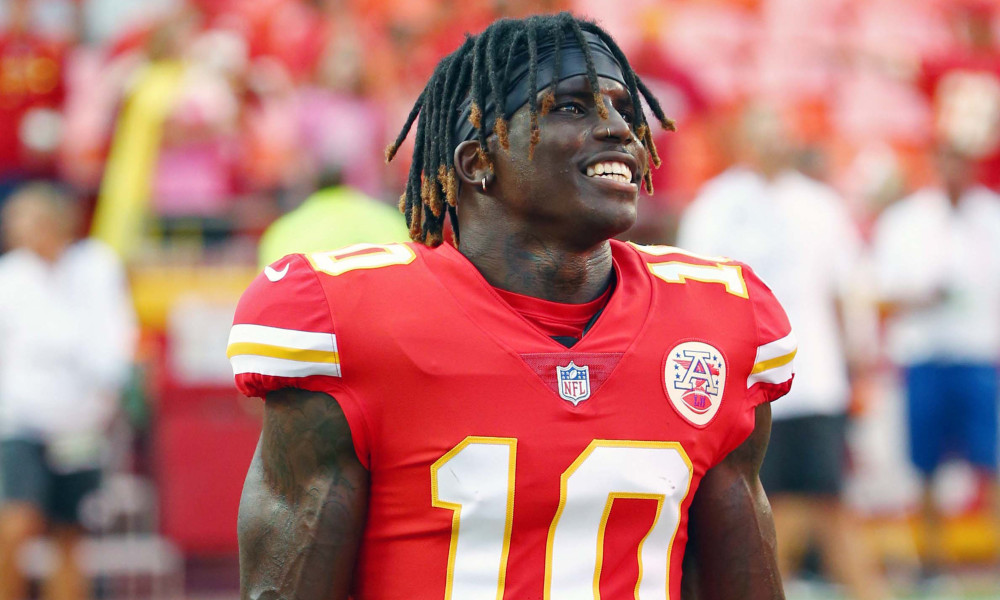 He has the swift speed, leading Kansas City Chiefs of the NFL to the triumph. Hence, Tyreek Hill, nicknamed as Cheetah has been a prominent wide receiver and running back for American football team since rookie year. Along the sports limelight, he gathered massive attention in 2014 for arrest in accordance with an assaulted pregnant girlfriend. However, Tyreek Hill tuned wholesome family to his partner, Crystal Espinal and three-year-old son.

As Tyreek Hill engaged to the same assaulted partner, is everything going decently between them? Are the duos planning for the wedding? Without ado let’s dig into Tyreek Hill’s engagement, girlfriend, wedding, and Crystal Espinal.

Back in 2014, Cops held the custody of American football player Tyreek Hill as per the filed complaints from assaulted girlfriend, Crystal Espinal. According to Crystal Espinal, the couple involved into the heated argument where Hill threw her like a ragdoll and sat across the girlfriend’s face accompanied by repeated punches on the face and stomach.

Ultimately, he pleaded to the criminal offense of domestic abuse and strangulation towards, Crystal Espinal. As a result, the court sentenced him for three years of probation, anger management course and domestic-abuse evaluation.

On a personal note, Tyreek Hill engaged to the woman he pleaded guilty of domestic abuse and choking. He is on a path of redemption with the wife to be, Crystal Espinal and three-year-old son.

When is Tyreek Hill wedding?

In August, he accomplished his terms on probation. Now he delights in having a family and sportsmanship like before. Tyreek Hill aims at excelling fatherhood for his little son. On the contrary, he hasn’t defied his wedding date with Crystal Espinal yet.

“I enjoy going home every day because every day is a challenge for me. Stepping up another notch. I’m trying to be a great father. Not only a great football player but a tremendous father to my son because I want him to grow up and be better than I was.”

He played opposite to Cowboys at the beginning with six passes for 62-receiving yards in 2014. The victory against Texas Tech in the same year is a successive story of Tyreek Hill.  It led his team Oklahoma State fame to the NFL. However, the accusation of domestic violence compelled the team to dismiss him. Similarly, NFL didn’t draft him 2016 following the curse of a criminal charge.

The same year, Kansas chief chose Hill on $2.58 million contract that includes $100,000 guaranteed and a signing bonus of $70,000. And the contract has the tenure of four years. Doesn’t Tyreek Hill net worth whop a hefty figure? He has a record of more than 50 yards, including a 91-yard punt return on 24 career touchdown.

He was born on 1st March 1994. Currently, Tyreek Hill age is 24 years old. He hails from Fort Lauderdale, Florida and later commuted to Georgia. Since school days, he has an athletic spirit.

Hill stands at the height of five feet ten inches. He bagged 100 meters, and 200 meters at the 2012 Georgia 5A state meet while attending Coffee High School. Later, Hill enrolled at Garden City Community College, Oklahoma State University, and the University of West Alabama.