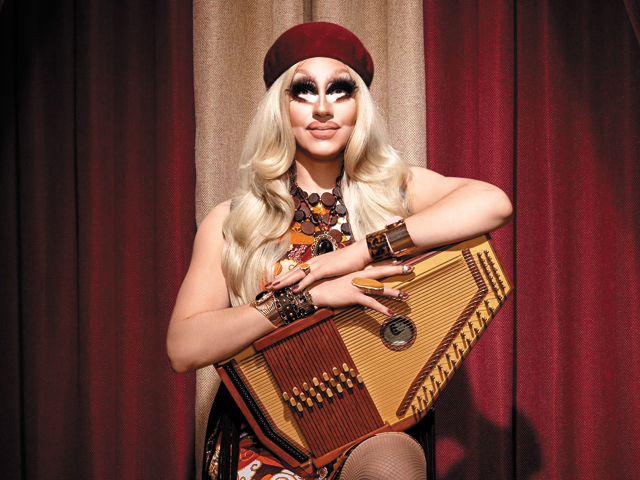 Trixie Mattel is a famous drag queen, comedian, singer, as well as an actor from the United States. He rose to fame when he entered as a contestant in the American reality TV show titled, ‘RuPaul’s Drag Race.’ He started performing drag at the age of 19 and made his first public appearance in ‘The Rocky Horror Picture Show.’

Trixie entered as a contestant in the seventh season of ‘Drag Race’ and was placed sixth in the final. Owing to several controversies, he became well known among the public. He later moved to Los Angeles and started performing standup comedy, acting and was next seen in the popular series ‘UNHhhh’ alongside Katya Zamolodchikova.

He has also released two studio albums, both of which have earned critical acclaim. Recently, in March this year, he was crowned the winner of RuPaul’s ‘Drag Race All-Stars 3’.

Read more: Rain Dove Bio Reveals: Prefers “They” While Calling Him: Who Is His Partner?

Trixie is dating someone special. She is in a relationship with a boy named, David. She likes her boyfriend’s name a lot, so she keeps on saying it a lot.

The couple started dating in 2017. But how they met each other, it’s still unknown. Trixie reveals that when she is with her boyfriend, she tries to make sure the time she has with her boyfriend is more about him than it is about her.

She even mentioned her boyfriend’s name on Twitter as a reply to one of her followers.

That’s my boyfriend David! He loves you.

Trixie hasn’t revealed much about her boyfriend. She protects him from social media users as well.

The drag queen, Trixie Mattel has an estimated net worth of $2 million.

Trixie started performing drag in the year 2008 at LaCage NiteClub. He participated in the 7th season and got evicted early in the fourth episode. The elimination was controversial, and Trixie was brought back in the eighth episode, only to be eliminated in the 10th episode. At the end of the season, she placed sixth in the competition. However, her controversial exit made her the most popular contestant.

Trixie then appeared alongside Katya Zamolodchikova, in the web series ‘UNHhhh,‘ which was of 73 episodes. The duo worked together again in ‘The Trixie & Katya Show’ in the year 2017.

@jonathandbennett came to my program.

Her most popular show is the stand-up comedy titled ‘Ages 3 and Up’. He has also been the part of ‘Haters Roast: The Shady Tour’ alongside other members from RuPaul’s ‘Drag Race.’

In 2018, Trixie returned in RuPaul’s ‘Drag Race: All-Stars 3 and went on to become the winner after defeating Kennedy Davenport in a lipsync competition. She even appeared in a cameo role in FX’s ‘American Horror Story.’

Trixie’s earnings are not only stuck at the TV series appearances, but he also makes his worth from his merch sales. He sells his merchandise items such as the signed and unsigned poster, baseball t-shirt, limited high heel pins, World tour tees, skinny legend fans, sunglasses, and so much more on his official website for a price ranging from $10 to $30.

Similarly, his source of income is also from the tours he performs in. On a recent note, he will have his Trixie Mattel Grown Up 2020 tour in coming months, so don’t forget to book the tickets. He will be at Seattle, Portland, San Franchisco, Boulder, Kansas, Royal Oak, Cleveland, and many other cities.

The famous drag queen, Brian Michael Firkus, is known by the stage name Trixie Mattel. He was born in the year 1989 in Milwaukee, Wisconsin. His birthday falls on 23rd August, which makes his age 29.

Trixie is half Ojibwe and comes from a native American family, living in Crivitz, Wisconsin. He had an abusive father who used to call him Trixie when he acted like a girl. She went to the University of Wisconsin-Milwaukee, where she was introduced to drag. She performed in a production of The Rocky Horror Show at the Oriental Theatre.

Trixie attended The Institute of Beauty and Wellness in the year 2014 before dropping out. She later participated in RuPaul’s Drag Race.

Trixie stands tall at the height of 5ft 11ins.

Just recently, in 2020, when the world is scared of the COVID-19, Trixie appeared on the Hannah Montana star, Miley Cyrus’ Instagram Live. The live is for Cyrus’ Bright Minded series. The show also sells merch online whose profits will be used for the benefit of Coronavirus relief.

Trixie, on her own local level, is also hosting a live game-related stream on her channel on Tuesdays for charity.