Home Entertainment Who is Trevor Noah Dating? Know his Past Affairs, Dating History, Net Worth, Career, and Wiki-Bio

Who is Trevor Noah Dating? Know his Past Affairs, Dating History, Net Worth, Career, and Wiki-Bio 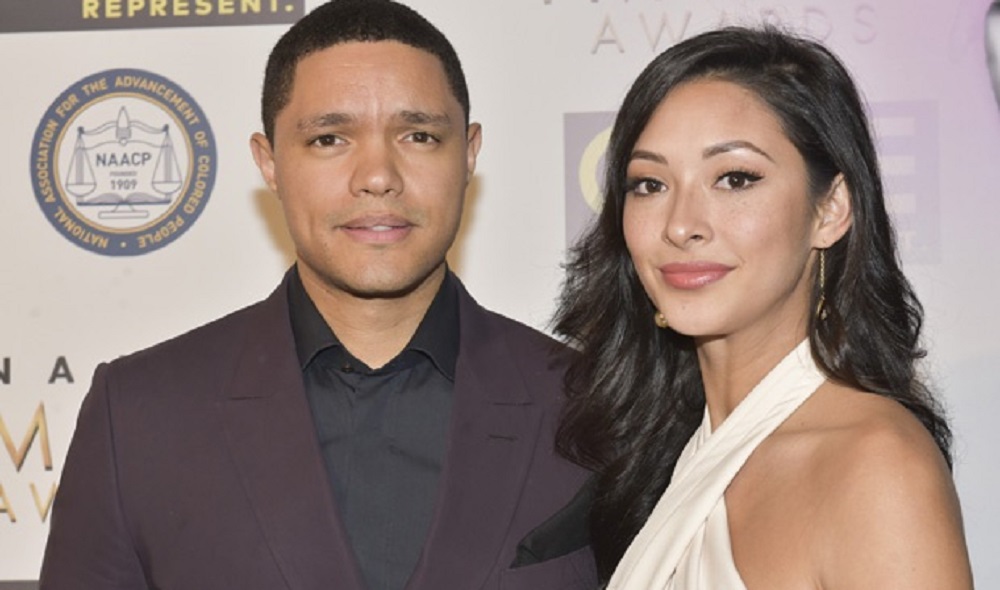 South African and Swiss comedian, television host, and political commentator Trevor Noah came into the spotlight after hosting an American satirical news program, The Daily Show. Whether it’s comedy skills or hosting skills, Noah has always been on the headlines.

Recently, the French ambassador to the U.S slammed Noah for saying that Africa deserved credit for France winning the 2018 World Cup due to the presence of a large number of black players on the team. On Monday, after France won the World Cup 2018, Noah claimed: “Africa won the World Cup.”

Later, Gerard Araud slammed the late-night comedian that he was legitimizing racist ideologies. Araud also claimed that he was watching the show with great attention and did not make him laugh at all.

Who is Trevor Noah Dating? Is he Married or just Dating?

You might know the fact that Trevor Noah is not single at all. The hilarious television host is dating girlfriend Jordyn Taylor. Trevor Noah’s girlfriend is a former singer who released the first single Strong that gained huge attention on Myspace in 2005.

If you remember Trevor Noah’s ex-girlfriend, Dani Gabriel, don’t you think that Gabriel and Taylor resemble quite a lot? Gabriel and Noah were deeply in love with each other but later broke up.

Noah’s move to New York City to pursue his dream as a new Daily Show host had to leave his girlfriend back home at that time. However, Gabriel still claims that she is proud of him and is happy for his huge success.

Back to the topic; Noah and his current girlfriend, Taylor first met at one of his comedy gigs. She was so much in love with Noah for his charm and humor. Taylor explained that she couldn’t resist the smile when she sees him.

Noah and Taylor share a luxury duplex penthouse on the Upper West Side of Manhattan. Sources claim that Taylor though being a California native moved to New York City just to be closer with him and to stay with him. Isn’t it sweet?

Love, care, affection, support, and mutual understanding is what helped the couple to make their relationship much stronger and smoother. Trevor Noah’s girlfriend Taylor has always been quite supportive.

When Noah published his memoir, Born a Crime: Stories from a South African Childhood, Taylor took her Instagram to show how proud and happy she is with him.

UPDATED – Trevor Noah and his girlfriend are apart as they broke up in 2018.

Working in the field for over a decade, no doubt, Trevor Noah’s net worth is high as he might have collected a decent amount of money.

Trevor Noah’s net worth is around $13 million the same as another TV host, Tempestt Bledsoe, as of 2018. In fact, he earns a huge amount of money from his comedian skills and acting skills.

Noah reportedly owns a multi-million rand mansion. He splurged $20m on the house as per TMZ. The house which provides breathtaking views of Los Angeles is located on a hillside in Western Bel-Air.

The home consists of multiple bedrooms, including an “ultra-private VIP suite”. Moreover, there’s a home theatre, infinity pool, and a saltwater aquarium.

You know that he has $13 million net worth but, do you know someone with over $13 million as their salary? Well, it’s none other than Richard Sherman, an NFL cornerback. He has a net worth of over $25 million.

Trevor Noah was born on February 20, 1984, and is currently 34 years old. He was born in Johannesburg, South Africa. Noah has a South-African nationality and belongs to South African ethnicity.

Regarding his build, Trevor Noah’s height is 5 feet 11 inches and his weight is around 75 kg. Noah started his professional comedian career back in 2002 and is still active in the field.

Read More: LeeAnn Kreischer Is Happily Married To His Comedian Husband: Know Her Family Details Along With Wiki Facts

Noah began his professional career as a comedian and later started his television hosting career with the South African Broadcasting Corporation. He was the runner-up in the Strictly Come Dancing’ fourth season in 2008.

It's so hard to focus on the cameras when you're actually just trying to look at JLo and Rih on the carpet but I did my best. #Balmain #MetGala

Noah was also the creator and the host of Tonight with Trevor Noah from 2010 to 2011.