Tori Patton, Is She Happily Married To Her Husband, Zach Rollof? Let’s Inspect About Her Baby And Net worth. 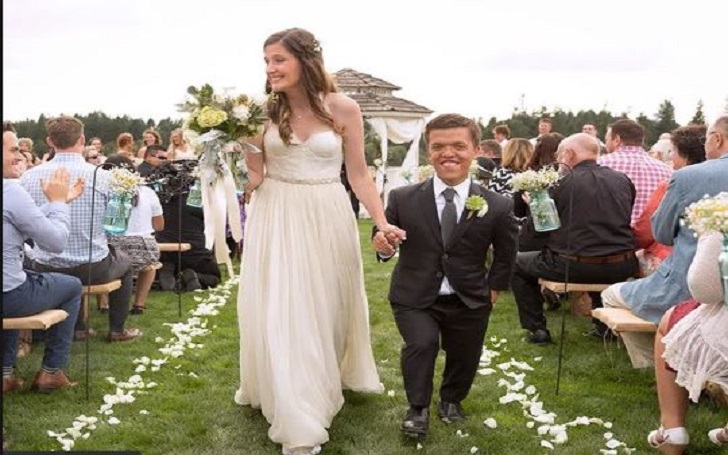 A wedding is the most beautiful thing for every couple. But when it comes to celebrity marriage, their fans go crazy to know each detail about them.

Well, all of them are assuming about which star we are talking. It’s none another than Tori Patton. Is she happily married to her husband, Zach Rollof? How were they dressed up in their wedding? Do they have a baby?

Get details of all the information right here.

Tori Patton’s blissful married life with her Husband and her Baby!

Tori Patton rose to prominence after marrying her dwarf husband, Zach Roloff. Zach is a Reality Star and TV personality. It was a beautiful moment when the couple tied the knot.

Well, many would get jealous looking at them exchange their wedding vows. In fact, it was a grand wedding ceremony that took place on Zach’s family’s farm near Portland, Oregon.

They tied the knot on July 25, 2015, in front of 200 guests. Zach’s parents, including Zach’s brother Jacob, his sister Molly, and Brother Jeremy, as well as Jeremy’s wife Audrey, were Present.

Zach’s best man was his brother, Jeremy and Tori’s friend CindiEggert was the maid of honor.

The bride, who is 5 feet 3 inch compared to Zach’s 4’3″ was overwhelmed with emotions during the touching ceremony. After the ceremony, Zach’s brother gave the best speech where he said;

‘Height might have told us differently our whole lives, but I look up to you in a lot of ways,’

Tori Captioned on her Instagram on April 3, 2015, “You are the one with whom I choose to spend my life.” Further, she added

“3 years ago today this man walked into my life and changed it for good. Last night he got down on a knee and asked me the most important question of a relationship. And of course, I said yes. I cannot wait to spend my life with my best friend.”

According to US Magazine, the couple engaged in April 2014.

You can get much more information about the beautiful couple in the given video.

Tori and Zack welcomed their baby

After completing their marriage for two years, Tori and Zack were on cloud nine as they were becoming parents for the first time.

Read more: Is TV personality Jordan Wiseley Dating With Girlfriend Or Already Married To Wife? Know His Wiki And Net Worth Details

Zack stated that Tori gave her news of being pregnant in November 2017 that their child would be a boy. The news of Tori’s pregnancy fled on the internet when Zack posted his and Tori photo on an Instagram.

“He may have to take two steps for everyone else’s one step, but hopefully we’ll raise him in a way where that won’t stop him.” Further, Tori added, “He seems like a pretty stubborn kid already.”

The couple named their baby Jackson. According to TLC, Tori said, “We liked the name Jack, but now we don’t think we’ll end up calling him Jack, we’ll probably call him Jackson.”

When Tori got married to a reality TV Star Zach Rollof, she was just 22 years old. Since she married a star of a reality show, her income would meet her capability and plays in thousand dollars.

Not much is known about Tori Patton’s net worth. In fact, she is not even as famous as her husband, Zack Rollof.

As of 2017, Patton owned a total net worth of $0.5 million, however, there is no information about her current net worth.

On the contrary, Patton’s husband, Zack Rollof, holds a net worth of $5 million as of early 2018.