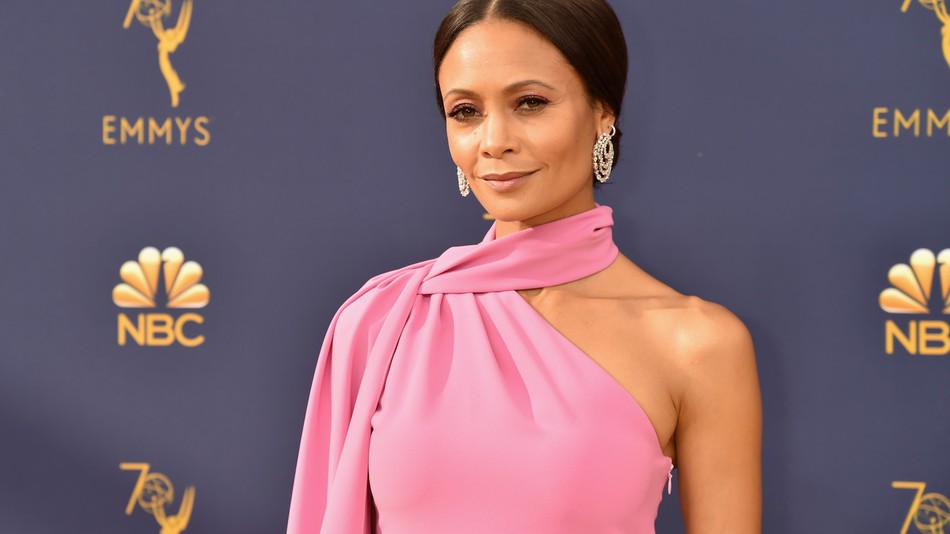 Nevertheless, there are plenty of highlights to remember from the ceremony at Microsoft Theater downtown. The British actress Thandie Newton won the Primetime Emmy award for Outstanding Supporting Actress in a Drama Series for her outstanding performance as sentient robot Maeve Millay on HBO’s Westworld.  Last year, she was nominated in the same category, however, lost to Ann from The Handmaid’s Tale.

The actress was wearing a long pink Brandon Maxwell gown. She used an F-bomb while giving her acceptance speech which was the highlight of the NBC ceremony. Sheepishly covering her mouth, she said:

‘I don’t even believe in God, but I’m going to thank her tonight.’

Being someone who has dated A-class actors and directors from the industry, people are more than curious to know Thandie Newton married life. Newton is married to her husband, Oliver OI Parker. Her husband wrote and directed the musical movie, Mamma Mia! Here We Go Again in 2018.

Moreover, the beautiful pair exchanged their wedding vows in July 1998. She recently posted a photo with her husband wishing him their 20th wedding anniversary on her Instagram.

Awwwww Me and the hubster on the tiles the other night. 20 year wedding anniversary last month. We arrive in this world alone, and we leave alone; so a shared personal history is a rare, magical and precious thing. Worth fighting for. Worth tending to. I’ve always thought that choosing to love one person your whole life is the most important instruction on what love truly is. There are always gifts around the corner, no matter how challenging or frustrating a shared life can be. Acceptance, faith and gratitude are everything. Growth is painful, but each new arrival is a peak at Nirvana x T #gettyimages

Previously, Newton dated the director of the movie ‘Flirting,’ John Duigan who was 23 years older than her. Her one-year relationship with the actor, Brad Pitt made headlines in 1994. They met in the sets of ‘Interview with the Vampire’ and began dating.

Read More:  Who Is Violet Affleck? Everything You’d Like To Know About Jennifer Garner’s Daughter

As of now, Newton and her husband are still together and totally in love. At present, there are no marks of divorce from her husband.

Together with her husband, Thandie has three children. She gave birth to her first daughter named Ripley in 2000. She welcomed her second daughter, Nico in 2004.

The inspirations behind the name of her daughters are the character Ellen Ripley in the movie Alien and the singer Nico.

Similarly, Newton and her husband welcomed their only son, Booker Jombe in  2014. She gave birth to all three children at her home.

The English actress has bagged up many successful movies and TV roles alongside many top male actors like Tom Cruise, Brad Pitt, and Will Smith. Within seventeen years of her career, she has amassed millions of net worth from the hundred acting endeavors.

Newton won BAFTA Award for Best Actress in a Supporting Role for The Pursuit of Happyness in 2006 and Emmy Award for HBO Westworld in 2018.  She has won plenty of nomination and awards for her excellent acting in many movies and TV series. But what’s the figure of Thandie Newton net worth?

As of 2018, Thandie Newton net worth is estimated to be $12 million as per Celebrity Net Worth. Whereas, as per The Richest, his net worth is $17.5 million.

Moreover, Newton worked in several movies and TV series from where he makes a good net worth and salary. As per some sources, a TV star makes a salary between $150k to $1 million.

Melanie Thandiwe “Thandie” Newton was born in 1972 in Westminster, London, England, to her parents Nyasha and Nick Newton. Her mother was a Zimbabwean princess of the Shona people, while her father was a laboratory technician.

Newton celebrates her birthday on November 6 that makes her age 45. She is of mixed ethnicity having the Zimbabwean and British origin. Thandie Newton has a height of 5 feet 3 inches.