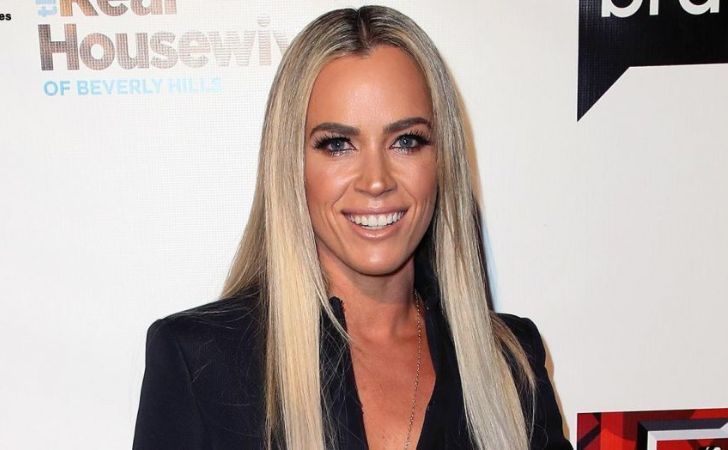 Teddi Mellencamp is one of those divas who got famous after featuring The Real Housewives of Beverly Hills. As the daughter of music star, John Mellencamp, she wasn’t new to the life of a celebrity.

Teddi enjoyed resounding success in her personal life after getting married to Edwin Arroyave in 2011. Her love life is full of drama and can be relatable with some of the best romantic movies. So, today we give you complete details about the married life and dating life of Teddi Mellencamp.

Yes, you heard it right, Teddi Mellencamp is a married woman. She tied the knot with her lover, Edwin Arroyave, way back in 2011. She is enjoying the best version of herself in her nine-year-long married life.

Introducing you to her husband, Arroyave is a business tycoon. Specifically, he is the Chief Executive Officer of Skyline Security Management. Interestingly, he was Teddi’s first-ever date and how fortunate it is to marry your first boyfriend.

How Did Teddi Mellencamp and her Husband Meet?

The Real Housewives of Beverly Hills star, Teddi Mellencamp, met the love of her life at a night club at a Hollywood night club on December 26, 2008. Surprisingly, their first meeting turned into a one-night fling.

Teddi, initially, thought that after that night that it was only a one-time thing, and they would probably hang out only one time. However, destiny had other plans as their one-time meeting turned into a routine. The two dated casually for a pretty long time.

Things gradually entered the next level as Arroyave introduced his daughter, Isabella Arroyave, to Teddi. While many would bow out at those situations, she felt that the particular moment uplifted their relationship levels from casual to a serious one.

The engagement story was full of surprises as Teddi Mellencamp’s husband initially indicated he had no intention to tie the knot. Although that broke Mellencamp’s heart at first, she held the calm not to take any rash decisions and break up.

You may also like: Eliot Glazer made Thousands of Dollars from his Career. Here’s How?

The duo decided to have a pleasant time on Christmas Eve, but it was when the mic drop occurred. Arroyave bowed down on one knee to present her the ring at their apartment in Los Angles And; the rest is history!

The power couple of Teddi Mellencamp and Arroyave exchanged their vows on July 4, 2011, at Indiana. Interestingly, they felt that they were making a mistake as their mobile alarms went off in the morning.

Also See: Here’s the net worth of Jessica De Gouw.

Luckily, nothing unfortunate happened as the married couple is blissfully together, after almost a decade into their marriage.

YouTube: Teddi Mellencamp and Lisa Vanderpump get into dispute in Real Housewives of Beverly Hills.

She joined the cast of The Real Housewives of Beverly Hills, which helped her to strengthen her marital bond. In fact, it made them communicate more and helped them work on their relationship more.

Teddi Mellencamp Mother of Two and Ready for Third

The Housewive at Beverly Hills, Teddi Mellencamp, is a mother of two adorable kids with husband Edwin Arroyave. The couple is set for baby number three, another girl who will be shortly into the world.

Early on, she kept the pregnancy news under the wraps and shared it after getting bumps. The third baby will join Slate Mellencamp and Cruz Mellencamp, as his/her siblings. Furthermore, Mellencamp is also the step-mother to Isabella, Arroyave’s daughter, from the past relationship.

Mellencamp sets an inspiration to everyone who aspires to lose their weight. When she first moved to California, she gained over 50 pounds in the first six months itself. Following the pregnancy and use of steroids, she weighed more than 200 pounds, which depressed her.

One morning, she took the decision to lose her weight and form a new self. Interestingly, she opened her Instagram account for the same purpose to reflect upon her changes.

With constant workout, diet and yoga, she finally managed to become a whole new person. She fulfilled her goal of losing 80 pounds. Today, she is an inspiration to all other moms who lack confidence.