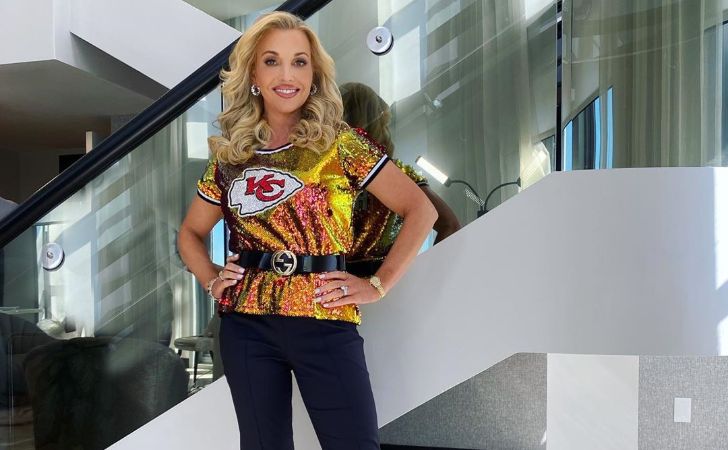 Tavia Hunt is the wife of the Dallas billionaire Clark Knobel Hunt who is the owner of Kansas City Chiefs. As Kansas City Chiefs won the Super Bowl 2020, Clark and his family are receiving a lot of buzz from the media.

Knobel Hunt is quite a lucky man since he experienced great success not just on his professional life as the founding investor in MLS, but also finding his soulmate in wife, Tavia Hunt. So, today we take you close to the family and married life of Tavia Hunt.

Who is Tavia Hunt?

Tavia Hunt, besides known as the wife of Clark Hunt, has her own identity with her professional success. The daughter of Ramona Shackles and David Shackles won the title of Miss Missouri Teen in 1990.

Hunt later competed in Miss Teen USA as well and made it to the top 12. Also, a fan of Kansas City, she was fortunate to work there starting from an internship and luckily finding her husband.

Tavia Hunt and Clark Hunt: Married for over 25 Years

As the famous saying, behind every successful man, is a woman, Tavia Hunt supported Clark throughout the ups and downs, which helped him experience immense success. Hunt met her beau at not the most romantic setups for the first time. Interestingly, she was interning at Kansas Chief and attended its annual luncheon when destiny decided to cross their paths.

Tavia fell in love with the MLS investor at a young age of 19. Likewise, Clark was only 25 when they started dating. Shortly after dating, they took things to the next level by getting engaged in 1991.

It was multi-billionaire, Clark who went down on one knee to propose Tavia for the marital agreement. The duo exchanged the holy vows two years later on October 23, 1993.

Today, the couple are blissfully together in their married life. In fact, they will complete their 27th anniversary in October 2020.

The happy couple, Tavia Hunt and Clark Hunt welcomed three adorable children to embark on their family life. Shortly after getting married, she gave birth to Gracie Hunt, their eldest daughter. Like mother, like daughter, Gracie also participated in the pageant world and bagged the Miss Texas International title in 2018.

The Hunt family then welcomed their first son, Knobel Hunt, named after his grandmother, Norma Knobel Hunt. He is a hardcore sports lover and plays regular football and soccer. Furthermore, he also attends his father’s Kansas City’s matches and integral events.