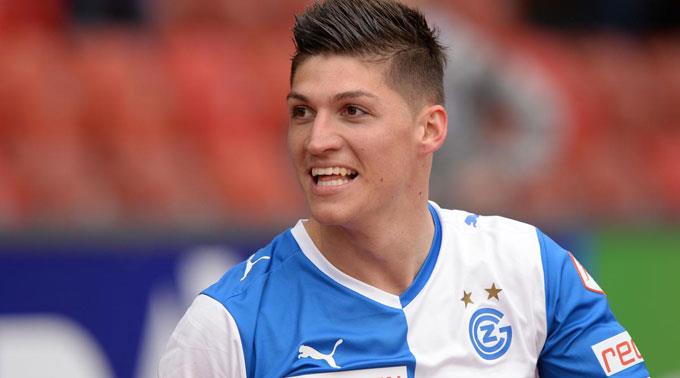 In the FIFA World Cup 2018, a Swiss professional football player, Steven Zuber’s second-half header equalized the match against Brazil. Swiss football fans beamed out of their seats when the match between Brazil and Switzerland concluded in the draw.  Thanks to the Steven Zuber header at the close range, the match provisioned the same score against five times World Cup title holder Brazil.  It triggered most of the people to google about Steven Zuber wiki. Who is Steven Zuber married to?

Get to know everything about Steven Zuber married life, wife, children, salary, net worth, FIFA 2018, bio and wiki?

A midfielder for Hoffenheim, Steven Zuber hitched to his best friend Mirjana Vasovic back on May 27, 2015. The couple tied the knot at the civil registry office and subsequently celebrated at the hotel. The same day, high profiled ministries got caught at the Baur au Lac, where the pair Steven and Mirjana stayed the wedding night. The bride in the alluring white lace gown, Mirjana Vasovic cited;

“We did not notice anything at all, only then did we learn from the media,”

Instagram feed of Steven Zuber comprises of their adorable pictures of celebrating either marriage anniversary or rejoicing the night out before FIFA 2018. The couple does not have children yet. Perhaps, they are planning of extending dynasty in future, what’s say?

Steven Zuber Salary and Net Worth

On July 12, 2008, he commenced the journey of footballer through the debut for Grasshopper in Intertoto Cup. In 2013, he signed a five-year contract of Russian Premier League Champions CSKA Moscow where the team led by three goals. A year later, Steven moved to Hoffenheim for four years deal. Now the contract is extended till 2020. In announcing the extension, director of football Alexander Rosen expressed;

“Steven is a versatile player. He can play on either wing or even as a full-back, he has always recovered from setbacks and has a lot of ambition,” he added.

On a simple shot, Coutinho from Brazil lit up the game-opening score against Switzerland. Despite the first strike from Brazil, Switzerland rushed up for more scores, while Brazil tackled the defensive stature of opponents.

After the five minutes of the second half, Shaquiri shoots the ball in a powerful cross. On the same note, Steven Zuber powered a header from the close range, while goalkeeper misses the opportunity. As a result, shocking result tournament of held back Brazil via Switzerland on 1-1.

He was born on August 17, 1991, in Winterthur, Zürich, Switzerland. Currently, Steven Zuber age is 26 years old. He is the son of Walter Zuber and Susanne Zuber. The professional football player Steven Zuber grew up with five siblings Melanie, Kevin, Severin, David, and Marvin.