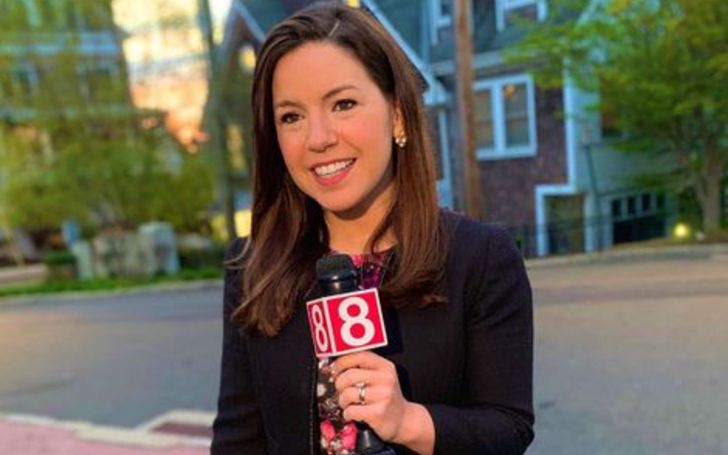 Stephanie Simoni is an award-winning American anchor and reporter who is best known for her work in the WTNH-TV.

The journalist is also famous for her works in the news networks like KATV Channel 7 News and WJCL/Fox 28 news networks. If you want to know more about the reporter, read the whole article!!!

Stephanie Simoni married the love of her life, Roger John Susanin, on 24th May of 2019. The couple shared the wedding vows at the OceanCliff hotel in Newport in front of their loved ones.

The bride slayed the wedding with her glamorous white gown whereas the groom was wearing a black tuxedo with a white shirt and black bow tie. Further, the duo chose a converted waterfront mansion in Rhode Island.

The wedding was one of the well-managed ceremonies of 2015. Stephanie’s great-uncle Rick performed the ceremony, whereas her sister Diane was the maid of honor in the ceremony. Moreover, both of Stephaine’s fathers, her father Steven, and her step-father, Robert, helped her walk down the aisle.

After the wedding ceremony, the newly-married couple donated in honor of their 200 guests to a Downtown Organization Mission for Education Children. And finally, the couple celebrated their wedding with a couple of dance.

As for the honeymoon, they decided to spend five days in the beautiful city of Azores. Besides, they also went to a South African safari the following year.

How Did Things Start Off Between Them?

Stephaine and Roger met for the first time while both of them started working at the ABC7 network. While it was love at first sight for Roger, Stephaine was focused on her work for a while.

The couple became friends for nearly a month before Roger expressed his love for the first time saying.

You make my life complicated.

Although, he said no other words to Stephanie that day, later Roger again expressed his love for her saying.

You’re a beautiful person, and I really think that we should date.”

As a reply, Stephaine told Roger that it would be a terrible idea to date. At that time, Stephanie was establishing her career and didn’t want her co-workers to talk about her personal life and professional life.

Stephanie said she just wanted to befriend Roger. But Roger had something else in his mind and said, “I have enough friends.”

Little by little, the duo started to become closer to each other, and finally, the couple officially dated in August 2009. But just after that, Stephanie began to work at the ABC News 8 as a weekend anchor and reporting, which eventually made the couple to spend life away from one another. Besides, they used to do calls and texts to fill the gaps between them.

In 2014, Roger met the fathers of Stephanie and hired her musician friend, Walker Cafe, to propose Stephanie at the Bluebird Cafe. And after the live performances, Walker sang the song Home as said by Roger and also invited him to the stage. Roger then said,

I told you from the beginning that you made my life complicated, and you still do, I asked you to start dating me, and you said it was a terrible idea. I said I didn’t want to befriend, but I was wrong about that because you’re my best friend.

The speech wasn’t even ended, but Stephanie answered him, saying, “Yes!”.

Mother of a Beautiful Daughter

Simoni gave birth to her first child as a daughter in mid-2017. She shared the picture of her daughter through a Instagram post with a caption, “What was your favorite moment of 2017? I have to say welcoming our little angel made it the best year yet!”

Congrats to the couple for becoming new parents!

Stephanie Simoni holds a net worth of $100,000 as of 2019. She garnered that fortune from her career as an anchor and reporter.

Simoni started her career as a intern at the NAHB Production Group in 2003. She garnered experience for nearly a year before switching to WTOP Radio in 2005. She started to work at WTOP Radio as a intern reporter from September 2005 to May of 2006.

In 2007, Stephanie joined WJCL/Fox 28 network as a news reporter, where she worked for nearly two and a half years. During her time at the network, she covered Savannah’s mayoral delegation in China. Further, in 2009, she started to work as a morning anchor and reporter at the KATV news network. She used to cover news for the weekend news at the KATV Channel 7 News.

As of now, the journalist is working as a morning anchor and reporter at the WTNH-TV. Furthermore, she works as a Saturday and Sunday Anchor for the Good Morning Connecticut. As for Monday-Friday, she works as an occasional morning anchor. Just like Stephanie, Shaina Humphries, Shawnte Passmore, and Mark Zinni are also popular WFSB news reporters.