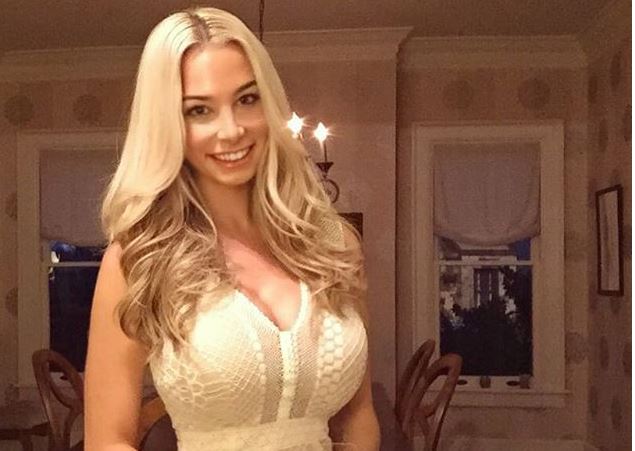 Earlier this year, the cameras captured Bryson DeChambeau during one of his usual lengthy range sessions in the first round at The Open Championship. After April, it seems like he is unstoppable. What might be the secret?

It seems like Bryson DeChambeau girlfriend, Sophia Phalen Bertolami has brought immense luck in the life of the American golfer. After her arrival into his life, Bryson won his second career PGA Tour victory at the Memorial Tournament in June and The Northern Trust in August. Following that, she seems poised for a huge summer. His 2017-’18 season of inconsistent play, a handshake controversy, and an epic driving range meltdown at Carnoustie are no longer troubling him.

As you already know, Sophia Phalen Bertolami is dating her boyfriend, Bryson Dechambeau.

It is reported that Sophia and Bryson were dating since April. After she dropped indirect hints about her interest in golf posting a photo with a bed full of Masters merch, people started speculating something was cooking.

The world came to know about their relationship after she posted a video of her boyfriend who walked out of her bathroom and went towards a waiting helicopter. In fact, Sophia has posted several photos of herself with her boyfriend after going public.

Looks like Bryson DeChambeau is dating IG superstar Sophia Phalen…that's the Memorial champ coming out of her bathroom before jumping on a helicopter https://t.co/aaJjTR8cl7 pic.twitter.com/kU3jN762fv

Besides Bryson, she previously dated former Mets utility player, Danny Muno. In 2017, she was in a relationship Cleveland Indians first baseman, Michael Anthony. Due to some unknown reasons, they later broke up.

As of now, Sophia and her boyfriend, Bryson, are often seen together. Her followers wish to see the couple getting engaged soon. Let’s wait until they make any official announcements.

While talking about love, Sophia Phalen has quite a list of words for it. On a recent post as she has written, “Love is like a bookmark, divides us with the before and the after, and always without words.” Well, the same post also has her talking about marriage. Have a look!

You got it, right?

The 27 years old Sophia Phalen Bertolami was born to her parents, John and Meg Bertolami. Her father is the CEO of Boston Pharmacy Management.

She grew up with her sister, Isabelle Bertolami, who is a registered dietitian. The actual information of her birthdate and birthplace is not in the records.

However, some tabloids suggest her birth date to be around December 11, 1991. The Sagittarius-born model is American by nationality.

In 2014, Sophia completed her degree in Kinesiology and nutrition from Chapman University in Orange County, California. In 2016, she studied nursing at Belmont University in Nashville.

Sophia has a pet pig, Stella whom she loves more than anything else in the world. Her pig weighs more than 1,100 pounds.

Sophia Phalen Bertolami is a nursing student and also an Instagram model who often flaunts her bikini line on her social sites.

Sophia has amassed more than 58.9k followers on her Instagram account. She has over 196 posts on her social media platform.

The star weights at around 56kgs. Likewise, she has blonde hair with a fair complexion heightening her beauty.

Also Read: Faye Tozer: Steps Star Declared As One Of The Contestants On Strictly Come Dancing 2018

Her body measurements read, 33B-23-34 inches. Since she has a big bust size, she has teamed up with La Isla to create a large cup bikini which usually costs in between $106 to $189 per piece.

Sophia Phalen Bertolami has an estimated net worth of around $500 Thousand. She makes the fortune from her social media career.

From her social media profile, she makes enough cash. Per ads post on her socials, she earns in the range of $239 to $398.