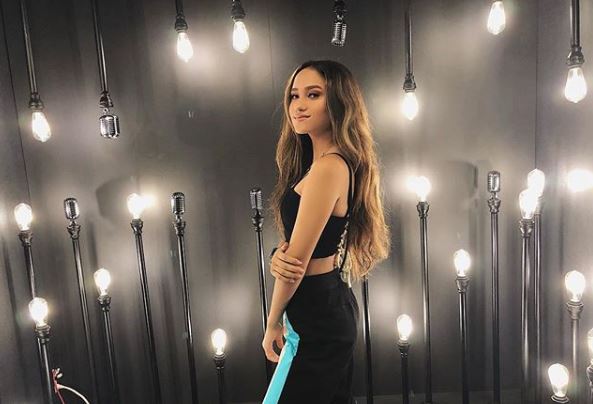 A 16-year-old beautiful Tampa’s girl, Skylar Stecker has justified the statement. She is an American singer-songwriter and actress who has appeared in the films like Super Fun Night and Teens Wanna Know. She has also dropped singles like “Crazy Beautiful,” “Rascal,” and “That’s What’s Up.” Her songs have even been peaked at the famous Billboard charts.

Are you keen to know more about Skylar Stecker songs and albums? Is the 16-year-old star dating someone? Let’s satisfy your inquisitive mind with Skylar Stecker bio, including her height, boyfriend, albums, movies, songs, and parents.

Who is Skylar Stecker Boyfriend?

Skylar Stecker is a teen actress and singer-songwriter who is currently focusing on developing her career. At only 16, she has released over 20 singles and recently dropped a music video of the song Let It Pour. Her songs have even made it to the Billboard Top Chart and to the heart of many lads who would love to date her.

However, Skylar is currently single as she is still looking for her dream boyfriend. Her social accounts also don’t hint to us about her possible boyfriend. She rarely posts pictures with boys on Instagram and other social accounts. So, she is single but ready to mingle at present.

Moreover, in 2017, Skylar tweet about finding a boyfriend. Check this out:

We hope to see her having a great relationship with her future boyfriend.

Skylar Stecker has an estimated net worth of $500k. Her major source of income is her social media career from where she collects a good amount.

Stecker began writing lyrics at a young age. She came into limelight by appearing in the International Modeling & Talent Association Awards in 2012. She was awarded as best singer and most sought-after talent. At the same year, she got the chance to sing the national anthem at places like Wisconsin Badgers, UCLA, Green Bay Packers as well as NASCAR race.

Later, Skylar created her self-titled YouTube channel and started making music. In 2013, she released her first debut original song Little Bit Too Much on her channel. Her song received more than a million views in her YouTube account in just four months.

At the same year, Skylar appeared in the ABC comedy Super Fun Night as a guest. Then on 25th September 2015, she dropped her first debut album including singles like “Rooftop,” “Crazy Beautiful,” “Rascal,” and “That’s What’s Up.”

In March 2017, Stecker dropped another single titled “Only Want You.” She was named Radio Disney’s Next Big Thing in May 2017. Her song “Only Want You” also reached at 2nd position on Billboard’s Dance Club Songs Chart on 2nd September 2017.

Since May 2018, Skylar has become an independent artist. In September 2018, she performed the National Anthem at the Los Angeles Chargers Season opener. Recently, she dropped her latest track named Let it Pour along with an official music video.

Skylar Stecker was born in the city of Tampa, Florida in 2002. Her birthday falls on 24th April, which makes her age 16.

Skylar was born in the family of Stecker to father Aaron and mother Kara Stecker. Her parents raised her along with her younger brother named, Dorsett.

She was raised in Wisconsin. At a young age, she was fond of singing and playing the instrument like Guitar, Piano, Dance, and acting.