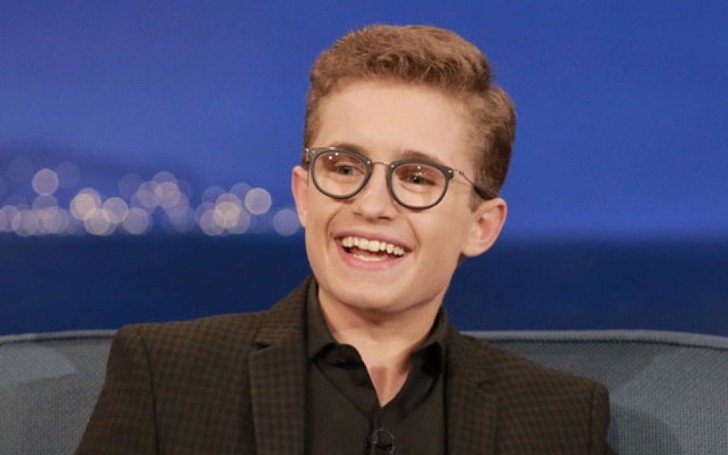 Starring the comedy Sitcom The Goldbergs in 2013, Sean Giambrone is known to the world as an Actor and a Voice actor.

Giambrone’s latest act can be spotted in his latest movie Kim Possible where he plays the role of Ron Stoppable. Get a closer look into the life of the star below.

The American actor was born on May 30, 1999, in Michigan, United States. Sean Giambrone was born to a father David and his mother Vonda. He later moved to Illinois with his brother, Luke Giambrone. Sean is of half-German half-Italian descent.

And moving to his education status, Sean attended Maine South High School. History and Arts were his favorite subjects in high school.

Is Sean Giambrone Dating Anyone?

Despite Sean’s admirable and charming personality, he is possibly single. He seems to post most of his life happenings on social media but there is no sign of his girlfriend.

Recommended: Is Lori Harvey Dating Michael B. Jordan? Also, Know Her Past Affairs!

Sean has flaunted his passion for sports on his social media bio. Football and basketball to be specific! He is a hardcore fan of Michigan Wolverines, the football team representing the University of Michigan. Will Smith, Robert Downey Jr., and the late Heath Ledger are his favorite actors.

Massive Net Worth at a Young Age

Sean Giambrone, at the early age of 21, earned a net worth of $6 million. This probably got you thinking where you were at 21 years of age, right? He has appeared in 19 movies and tv shows to date.

Giambrone has done more voice acting works than on-screen acting. His phenomenal voice acting can be seen in the hit animation movies like Big Hero 6, Adventure Time, and Secret Life of Pets 2.

You may like: Sharee Hough Married Her New Boyfriend? Also, Know About Her Ex-Husband, Kids, and Divorce!

Well, he did start his acting career at the age of 9, so it’s only natural to have such a huge net worth so early on, considering his performance in so many successful shows. He did commercials for McDonald‘s and Friendly‘s Restaurants. However, he made his tv debut in I Heart Shakey as an Afro Boy.

The Big Hero 6 Star has a huge 168k followers on his Instagram account. Seems he is proud of his legacy in The Goldbergs as he frequently makes posts related to the show.

The voice actor’s role of Adam Goldberg in the sitcom The Goldbergs earned him much fame. He appears as the smart, geeky, and pop-culture-obsessed young kid in the Goldberg family.

The 20-year-old bagged a nomination by Young Artist Award 2016 for the best performance in a TV series for his outstanding act in The Goldbergs.

The Sitcom first aired on September 24, 2013, on ABC. The series, originally created by Adam F. Goldberg was based on the childhood version of himself. The show features stars such as Wendi McLendon-Covey, Troy Gentile, Hayley Orrantia, George Segal, and Jeff Garlin.