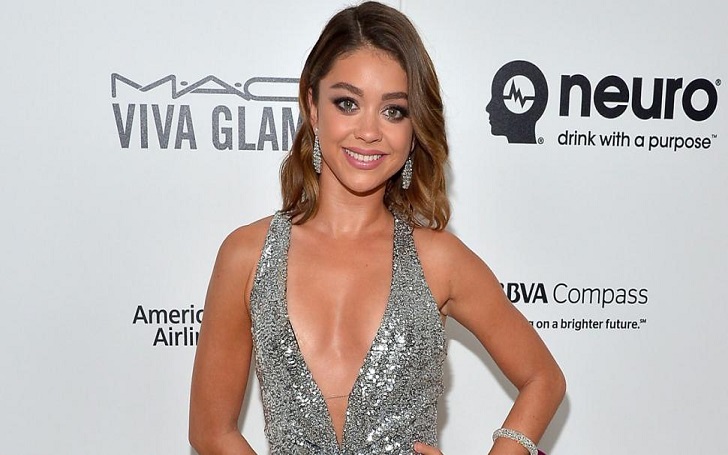 Sarah Hyland isn’t languishing after a breakup with her longtime boyfriend, Dominic Sherwood. It must have been a rough week for her to deal with the split. Breakup news with her boyfriend Dominic broke on Thursday last week. But, Sarah is dealing with her split with a philosophical approach to reduce the pain.

The 26-year old Modern Family star Sarah Hyland was spotted with a mini crop top flaunting her abs and bosom on Saturday. She flaunted her taut torso while leaving the gym in a sporty outfit. The crop top had a phrase ‘Karma has no deadline’ printed on it. 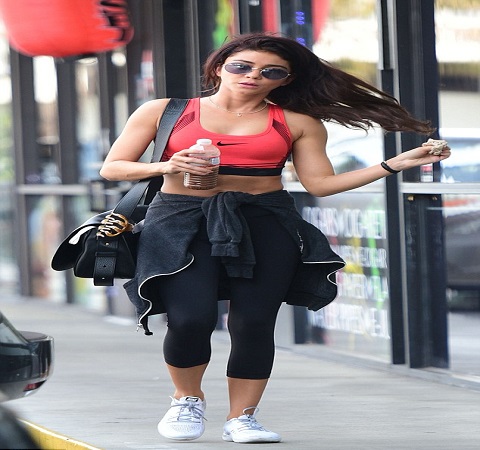 Besides, she wore a pair of patterned geometric leggings and gym shoes with a protein drink in her hand. The leggings emphasized her lithe limbs. The accessories included a black leather purse and leopard print Celine shades.

The Vampire Academy star seemed emotionless at the parking stall, but she must be little upset after the news of the split broke.

The former couple met and began dating each other secretly while costarring in the 2014 flick Vampire Academy. They made their romance public in March 2015. After dating for almost two years, the couple quit their relationship, and the news broke last week. The pair has decided to remain close friends.

Many people congratulated Sarah to have such a caring and supportive boyfriend via Twitter when they were dating each other. She enjoyed her dating life with her ex-boyfriend. She has posted many photos on Instagram while they were dating:

Not to worry, however, after her breakup with Dominic Sherwood, Sarah is currently in a dating relationship with her lover Wells Adams. The duo is quite skeptic about sharing her personal life on their socials. Though that, the duo often walks down the red carpet events together.

Recently, Sarah appeared with a baby bump on her show, Modern Family, and by far, Wells thinks she looks much beautiful while pregnant. Does this mean something?

A Short Bio of Sarah Hyland

Melissa Canaday and Edward James Hyland welcomed their daughter, Sarah Hyland on 24th November 1990. They gave birth to her in Manhattan, New York, U.S. Actor Ian Hyland is her brother.

Sarah attended the Professional Performing Arts School in Manhattan. She has a height of 5 ft 2 inches. Sarah is of English, German, Irish, Dutch, Scottish and Welsh descent.

According to her wiki, Sarah started her acting career in the movie Private Parts in 1997.  Hyland has played Haley Dunphy on the ABC sitcom Modern Family since 2009. Hyland co-starred in the Disney Channel Original Movie Geek Charming in 2011. She appeared in the film Struck by Lightning in 2012.

Sarah received a kidney transplant in April 2012 as she had a  kidney dysplasia. She has won Screen Actors Guild award three times and Glamour Awards once. She earns a salary of $75,000 per episode of Modern Family and enjoys a net worth of $9 million. This is the result of her hard work and outstanding performance.