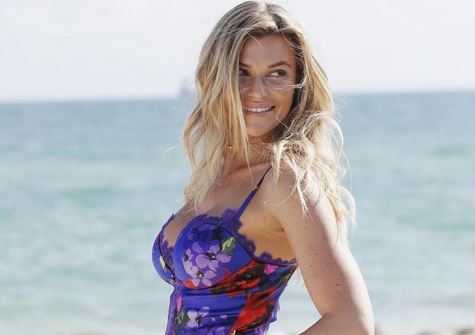 American supermodel Samantha Hoopes hails from Pennsylvania. She is a bikini veteran and a Sports Illustrated Swimsuit Issue five-timer, famous for appearing in the SI’s 50th Anniversary Swimsuit issue in 2014 for the first time. Commencing her modeling career at 24, Samantha is now a famous face in the entertainment and fashion industries.

As an SI model, she recently hit the beach in Miami, Florida, on 16th November for the ProAm charity Soccer match. She is also a new face of Stoli Vodka and believes every woman should feel comfortable with their body. She told MAXIM:

“I think that everyone should feel comfortable in their own body because at the end of the day that’s all you got.” “Feeling confident, sexy and beautiful is so important for women, especially right now.”

Read more: An American Transgender Model Amanda Lepore Was Captivated Inside The House For Five Years! Know Her Bio And Wiki-facts

As of July 2018, Samantha Hoopes is officially engaged to her Italian entrepreneur boyfriend. Sorry, boys but she is officially off the market! Furthermore, the lovebirds engaged in the same spot where they met for the first time; isn’t it romantic?

In June 2017, Samantha had met Salvatore in Portofino on the Italian Riviera, hitting it off immediately. To mark their 1st anniversary, they headed to where they first met. Furthermore, it was there where Salvatore popped the question to his girlfriend, now wife-to-be.

The bride-to-be wrote on Instagram, flaunting her engagement ring to over 1 million followers:

“380 days we have looked at each other in the eyes and then (380 days and then 381 bc of time zones).. this morning on the airplane back to where we first met where you presented 381 roses from now until forever we will be together and today we promised to be forever together!” “You’re mine @palella and I’m beyond with our love I can’t wait to spend forever plus 381 with you baby.”

The groom-to-be Salvatore popped the question to Samantha on a balcony filled with 380 red roses. After the engagement, the couple headed to Florence and La Maddalena, an island in Sardinia, to celebrate their future weddings.

Neither Samantha nor her fiance, Palella, has shared the details about their upcoming wedding. However, they look more than excited to get married soon.

Samantha Hoopes was born in 1991 in Doylestown, Pennsylvania. She celebrates her birthday on 10 February, making her current age 27. She grew up in a family with her four sisters and is the youngest of five sisters. Her parents’ identity is unknown.

Samantha’s family is into dirt car racing and has their race cars. Her mother is obsessed with speed, racing, and cars. Similarly, she has supportive parents who helped her get to California to pursue her dream.

Samantha graduated from Central Bucks East High School. She majored in Kinesiology at Penn State University before switching to business. She attended Barbizon Performing Arts Academy to study acting and modeling before moving to LA at 22.

Samantha rose to fame in 2014 at the age of 23 after appearing in Sports Illustrated‘s 50th Anniversary Swimsuit issue. Moreover, she even competed in the SI Beach Volleyball tournament the same year.

In June 2014, she posed for Maxim and was ranked #18 on its list of 100 Hottest. Select Model Management London and Elite LA have currently signed Hoopes.

Samantha stands tall as her height measures 5ft 8in.