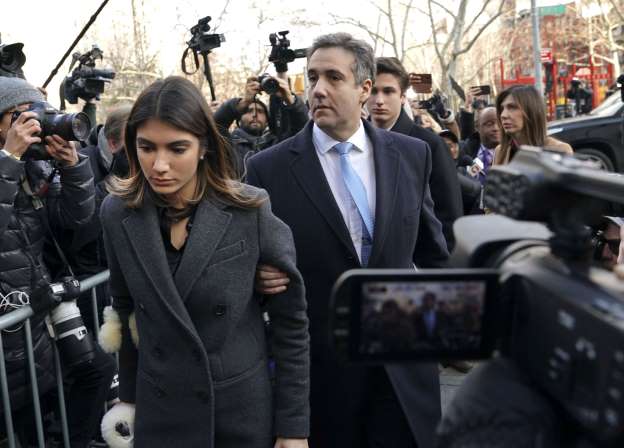 The American attorney and convicted felon Michael Cohen, who was a former lawyer for Donald Trump, went through a series of legal fights. On August 21, 2018, he pleaded guilty for finance misuses, tax fraud, and bank fraud.

Following that, the ex-vice-president of The Trump Organization made a second guilty appeal for his dishonesty to a Senate committee regarding the formation of Trump Tower in Moscow. Lately, on December 12, 2018, the court has sentenced him three years of prison detention and $50,000 fine.

On the other hand, Michael Cohen’s wife, Laura Shusterman also faced tons of criticism for being the one behind his taxi business. Likewise, Michael Cohen’s daughter, Samantha Blake Cohen became the victim of bullying. Unlike her father, she has nothing to do with any of his alliances. Nevertheless, the way the internet is treating her is unacceptable.

Samantha Blake Cohen’s Father: How is Her Relationship with Her Dad?

In May, Samantha’s father, Michael Cohen posted a photo of her wearing lingerie on his Twitter with an inspiring caption. The photograph was a recreation of the famous Warhol-Sedgwick photo.

However, people went over a rant on Twitter challenging his responsibilities being a father. Some even bashed him for being a bad instance as a father.

So proud of my Ivy League daughter…brains and beauty channeling her Edie Sedgwick. On Instagram @samichka_ pic.twitter.com/mpQxhr3mh3

Nevertheless, Michael just wanted to show his support and love for his daughter no matter what she wants to do with her life. Speaking of the photo, Samatha stated to the Daily Mail:

My father, who has always been supportive of my endeavors, was merely expressing his pride. There is nothing inappropriate in the picture and those who seek to make it something it is not are merely Trump haters who are using this an opportunity to stir up drama. I find it hypocritical that those who consider themselves liberal would criticize a woman embracing her body. There is nothing sexualized about the photograph… it is tasteful and it is demure.

Following Michael Cohen’s fraud case, Samantha has continuously been facing cyberbullying. Along with her mother, Laura, she is getting sexual harassment threats from unknown people.

In 2016, Samantha Blake Cohen took to her socials to post about her dad’s birthday. When he turned 50, she posted a photo with caption that read, “Happy birthday to the best dad in the whole wide world… 50 never look so good.” Well, this shows you the true beauty of the father Michael and daughter Samantha’s relationship.

Samantha Blake Cohen’s Mother: How is Her Relationship with Her Mom?

Samantha Blake Cohen’s mother, Laura Shusterman also made headlines after Donald Trump mentioned her in one of Michael Cohen’s related tweets. He claimed that her mother was also in her taxi business fraud. Her maternal grandfather, Fima Shusterman used to work together with Donald Trump in his business.

You Might Like: Morgan Stewart Desires To Be Pregnant With Her First Child With Her Boyfriend Turned Husband, Brendan Fitzpatrick

In the year 1994, Samantha’s parents got married. She has a younger brother, Jake Cohen, who currently studies at the University of Miami. Her father mentioned her and her mother in a statement to the Senate Intelligence Committee last September.

My wife and I have been married for 23 years, and are now entering into the season of our lives when we get to watch our children become adults themselves. My daughter, who is at an Ivy League school, and my wife, who is of Ukrainian descent, have especially been subjected to harassment, insults and threats … some so severe I cannot share them in mixed company.

Samantha Blake Cohen graduated from the University of Pennsylvania in 2018. She had joined the Ivy League school and became a straight A-student. While at Penn, Samantha was a member of one of the university’s non-Greek sororities, the Tabard Society.

Enjoying this historical moment at the Inaugural ball with my daughter @samichka_ pic.twitter.com/twvm95tiKA

When Samantha was seventeen, she climbed Mount Kilimanjaro. She did the daring adventure in aid of St. Jude’s Children’s Hospital. She has also volunteered for the organizations, Operation Smile, and Gabrielle’s Angel Foundation.

Though there is not suffice birth details of Samantha Blake Cohen, she is currently 22 years old. She looks no less than any models. She possesses a stunning body with a decent height.

Donald Trump attended her and her brother’s Bat and Bar Mitzvahs.

In her youth, she was an enthusiastic skater and jazz and ballet dancer. At the age of 16, she suffered knee problems and buried her dancing dreams.

Samantha has almost 13k followers on her Instagram, which is private. When it comes to her dating life and relationship, she is private. She prefers to keep her life low key. Till the date, she is yet to reveal anyone as her boyfriend, so, as of now, she might be possibly single.

Samantha Blake Cohen’s Net Worth: How Much is Her Earnings?

Samantha Blake Cohen has an estimated total net worth of $2 million as of 2019. She made her fortune from her career as a model where she makes $49 thousand per year.

Cohen, in addition, also generated around $22 thousand with her group for St. Jude’s Children Hospital.

Michael Cohen, in contrast to her earnings, has amassed a net worth of around -$1 million as of 2019. What? How could this be?

If this is what you’re thinking then he lost his dollar bills after he was subject to a federal investigation. He allegedly owes $1.4 million to the IRS. Three years earlier, Cohen and his wife had an estimated net worth of $40 million.

Stay tuned to find out more about your favorite celebrities in TheCelebsCloset.