Is Sabrina Seara Married? Know Her Personal and Professional Life 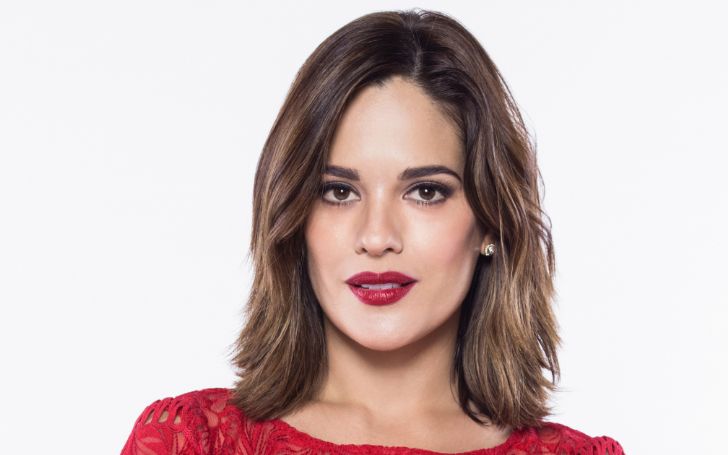 Scratch by scratch Sabrina Seara made her way up to the ranks of a famous Hollywood celebrity. Though a Venezuelan, she seems to have conquered the American showbiz industry.

With more than twelve years of acting experience, Sabrina has created immense fame for herself and with that, green bills as well. Let’s look into her professional career, but before that, let’s dwell on her personal relationships.

The Mi Familia Perfecta star Sabrina Seara tied the knot with a fellow Venezuelan actor, Daniel Elbittar. The duo’s together for over 4 years now, and they are soon to celebrate their 5th anniversary in the coming days. The exact date?

Well, the husband and wife shared their wedding vows privately on Thursday, August 28, 2014, in Hotel Isabel La Catolica, Venezuela. For the matrimony, the groom suited up in a grey suit and while the bride donned an emerald dress.

The duo took to their Instagram to share the news of their wedding. “Officially Mrs. Elbittar,” Sabrina gushed on her IG.

On August 29, 2017, Sabrina wished her spouse their third anniversary. Look at the post.

Sabrina again took to her IG account to wish her partner their third anniversary on August 30, 2017. Have a look at this post too!

From their marital relationship, the duo has a single child, a son, Maximiliano Elbittar Seara, who was born on November 14, 2016, two years into their marriage.

The pair had announced the news of their pregnancy on May 16, 2016, and they had even had a celebration for the upcoming baby on 2nd October 2016. Have a look at the posts.

The couple’s baby boy is currently 2 years old and lives in harmony with his parents and their pet.

All in all, the duo has no rumors of separation and any other extra-marital affairs of any sort. Let’s hope this married couple remains happy, always!

The Caracas born actress Sabrina Seara has twelve acting credits to her name, and from such, she must’ve amassed a whole lot of cash. But, does any of us know what her exact net worth is?

Well, The Lord of the Skies actress Sabrina Seara has amassed a net worth of around $4 million as of 2019. She made her worth from her career in the filming industry, but that’s not her source of income. She also generates a hefty amount from endorsement deals and ads on social media.

As we have already stated, the 34 years old actress has twelve acting credits under her name, and most noteworthily, she usually appears in TV series rather than in movies.

Usually, an actress earns around $39 per hour while in a year, they made an average $50 thousand per year. As she is also an actress, she also generates income in the same range.

Earnings from Endorsement Deals and Ads

As we all know, most of the stars who appear on movies and tv series also appear in photoshoots. Similar is the case of Seara, who also has appeared as a model in several shoots.

As a model, she usually makes around $45 thousand to $65 thousand per year. And, recently, she appeared in the Top360 magazine’s cover page, for which she must’ve received as much as $20 thousand.

The 5 feet 7 inches tall Venezuelan also posts ads on her socials. From her IG, she generates around $3.7 thousand to $6.2 thousand from per ads post.

Not really! It’s just an ad for Brigal Auto Sales.

Regarding Sabrina Seara’s body measurements, she looks lean with a rectangle body figure. She stands tall at a height of 5 feet 7 inches and has a weight of 58 kg. Similarly, she has brownish hair with eyes of the same color.