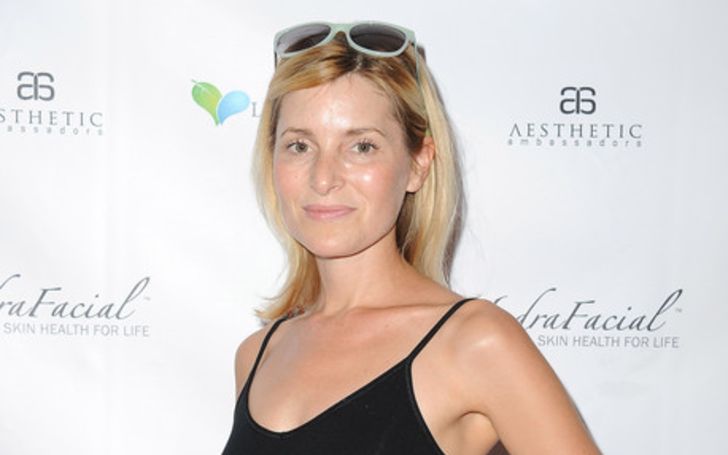 The English/Irish actress Rosie Fellner‘ Married Life is as sad as it can get. Unfortunate, to say the least, her husband, Adrian Vitoria, died of a brain tumor/cancer in 2016.

With almost 50 acting credits to her name, Rosie was having a blast in her professional life, but for her personal life, she was just out of luck. Let’s stop the chitchat and learn more about her.

The 42 years old actor Rosie Fellner was previously married to her husband, film director, and actor, Adrian Vitoria. The two worked together in the movie, The Crew, where her former partner was the director while she appeared as Pamela Thomson.

At the moment, Rosie is without any dating rumors. Following the demise of her husband, she isn’t as socially active, and hence, talking about her relationship makes it harder for all of us.

As we’ve stated before, Rosie’s spouse died of brain tumor/cancer at the age of 48 on 20th November 2016. Her partner found out about his tumor in May 2015 when he was admitted in a NY hospital.

Though the doctors were able to remove most of the tumor from his brain, he couldn’t make it. The man was bedridden for most of his latter days, unable to read, write, and even lift his head.

It was luck that helped Fellner and her husband to make it out of the 2004 Boxing Day Tsunami in Srilanka, which claimed over 280 thousand people’s lives. But, this time, luck wasn’t around to save Adrian.

Rosie Fellner amassed a huge net worth of around $1.5 million as of 2020 from her acting career. She makes about $49 thousand per annum as an average actor.

The lady started her career in 1997 with the role of Glory Factor in So-Called Friends. Similarly, the same year, she also appeared in Cull. Following this, she has made appearances in 47 acting credits to date.

Besides her acting works, she also earns income from her career as an entrepreneur. She, alongside her late husband, was the founder of their own company, ROSEBUD Pictures.

Rosie also earns from brand endorsements. She is currently endorsing Lacreme de La Creme, American Airstream, Champagne for Life, Pippin Vintage, among others, according to her personal website.

Talking about her philanthropic works, Rosie is a part of a number of NGOs and INGOs. She is on the advisory board for Women: Inspiration and Enterprise. Similarly, she is also engaged with Bite the Ballot to engage youth in politics.

Is Jimi Mistry Happily Married to His Wife?

Fellner, likewise, also supports Westminster Befriend a Family (WBAF). This organization sees to the practical and emotional support to families.

Something about Rosie’s Early Life

Rosie’s British parents, father Vaughan, and mother Ruth Fellner bore her as the youngest kid among the family in Galway, Ireland. She has two older brothers, Seth and Mojo Fellner. Following the divorce of her parents, she had to move across countries, France, Portugal, and then finally, Spain with her mother and older siblings.

Fellner was attracted to acting since childhood as she loved Shakespeare, which also led to her act in Hermia in Spain when she was still a child. When she was 15, she left home to be with her brothers and joined as an acrobat for their Circus, Turbozone.

Several months later, she enrolled at The Hub Theatre School in Cornwall and also graduated from The London and International School of Acting.

All in all, the lady has had a successful professional life but alas, the same cannot be said about her personal life.