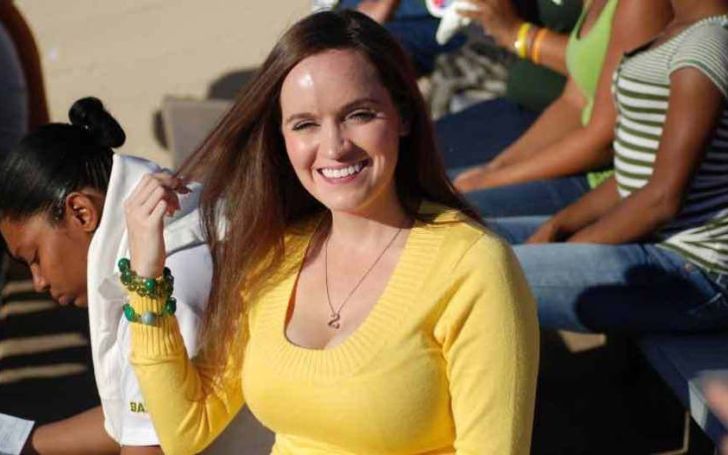 Fame can be costly when one needs to sacrifice their everything and need to live in open forcefully pulling down the curtains of their personal life. Rebecca Liddicoat is one of such people who came to the limelight for her association with a famous person.

To make the long story short, the 30-year-old is the former wife of the renowned American football player Robert Lee Griffin aka RG3. However, she rose to fame only after splitting with her estranged partner. So, what happened between them? Did Rebecca Liddicoat RG3 had any children from their time together? Get all the info right here!

Who Is Rebecca Liddicoat?

Rebecca Liddicoat came to fame as the wife of American Football player Robert Griffin III. Besides, she majored in biology and completed her degree from Baylor University.

How Is Rebecca Liddicoat’s Relationship Status? Where Is She Right Now?

After a messy divorce with her former spouse, Rebecca Liddicoat is likely single at the moment. There is no information or news about her relationship with anyone.

Rebecca is also not active on social media platforms like Instagram and Twitter which is why her current relationship status is a mystery to all. However, there is a strong possibility that she is not married yet.

As mentioned above, previously Rebecca Liddicoat was in wedlock with her boyfriend turned husband Robert Griffin III popularly known as RG3. Her former husband is an American quarterback who currently plays for Baltimore Ravens.

The duo first got to meet through their mutual friends in 2009 though, the love between them did not blossom immediately. It was only after some time they became lovers and dated for a while.

The lovely couple engaged in 2010 and walked down the aisle after almost three years on July 06, 2013 in Denver, Colorado. After almost two years of exchanging wedding vows, the two welcomed a child, an adorable baby daughter, Reese Anne on May 21, 2015.

You May Also Like: Antwon Tanner’s Relationship And Married Life!

Everything was going well for the small and happy family of three; it seemed until the day when unexpectedly her spouse, RG3 filed for divorce in September 2016.

The footballer stated irreconcilable differences and also further said that they couldn’t get along anymore. Subsequently, Rebecca nad RG3 officially divorced in 2017.

Since divorcing, Rebecca Liddicoat is believed to be single although, her ex-partner Robert Griffin III AKA RGIII is now a married man. His newlywed wife is Grete Sadeiko with whom he tied the knot in March 2018.

The two, in fact, was in an affair when RG3 was still married to Liddicoat. In addition, the duo even shares a daughter, Gloria Griffin who was born on July 02, 2017. After being disposed of like garbage, one can only imagine how much pain Rebecca might be going through right now?

How Much Is Rebecca Liddicoat’s Net Worth? What About His Salary?

Although Rebecca Liddicoat’s profession is not learned yet, she should have a net worth of no less than $1 million. The fortune is thanks to her divorce settlement with her former partner.

You May Also Like: Georgina Sutcliffe’s Net Worth And Earnings!

The court reportedly ordered to pay RG3 fifty percent of the fair market value of his Montgomery, Texas mansion which he bought in 2016. It has not been uncovered whether or not the quarterback paid the sum.

Speaking about her ex-husband Robert Griffin’s wealth, he plays in the highest football league i.e. NFL. He boasts a net worth of $13 million and earns a hefty payroll of $5 million a year.

Unlike his former wife, who is finding hard to meet the needs of the end needing $36,000 a month to live on, he certainly can afford to live in all luxury.

Rebecca Liddicoat stands at a height of 5 feet 2 inches (1.55 meters). Both her eyes and hair are dark brown in color.

Where and when was Rebecca Liddicoat born?

Who are Rebecca Liddicoat’s parents?

What ethnicity does Rebecca Liddicoat belong to?

Where did Rebecca Liddicoat receive her education?

Which color eyes does Rebecca Liddicoat have?

What is Rebecca Liddicoat’s hair color?

How old is Rebecca Liddicoat?

How tall is Rebecca Liddicoat?

Stay updated at TheCelebsCloset for more entertainment and celebrity news.