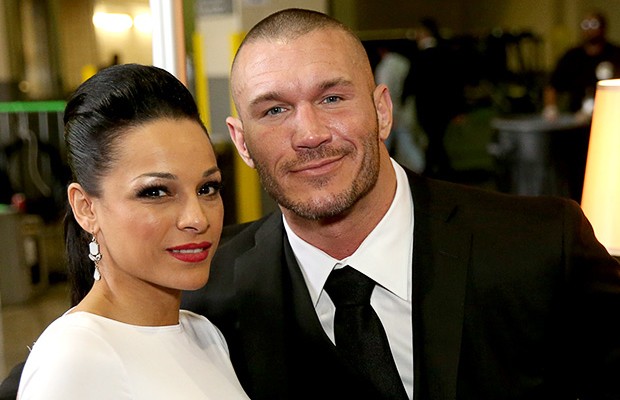 Having no prior career attributions, popularly known as famous WWE wrestler Randy Orton’ wife, Kim Marie Kessler is the name that we often hear. Unlike others, she doesn’t have to put an effort to achieve celebrity status.

Kim Marie Kessler is a married woman with four kids. She is married to her boyfriend turned husband Randy Orton. Kim is Randy Orton’ second wife after divorced with his first wife, Samantha Speno.

Her husband Randy Orton divorced his first wife in 2013 after ten years of blissful marriage. Orton has a beautiful daughter, Alanna Marie Orton with Samantha.

You Might Also Like: Inside Scoop On Bray Wyatt’s Dating Affair After Divorce With Ex-wife, Samantha Rotunda! Explore His Wiki-Bio And Net Worth Too!

Talking about the pair, Kim Marie Kessler and husband Randy Orton, her career took a turn after she began dating the WWE superstar.

Marie and her husband Orton started dating in 2012. Finally, in July 2015, Orton proposed Kim during a candlelit dinner while they were on vacation in Bora Bora.

Kim also explained how Orton had hidden the ring under a napkin and planned to propose while they were dancing. On November 22, 2015, the beautiful couple exchanged vows in Las Vegas.

People use the term SOULMATE so loosely. Not in our case tho. @randyorton you are my SOULMATE without a doubt!! Everyone close to us knows that. It’s only our 2nd wedding anniversary together but that means we have like 50 more anniversaries to spend together 💞. I love you more then my words could every express but the wonderful thing is… you know how much I love you and I know how much you love me. I will always be the person you can lean on, depend on, and love on. You are without a doubt my best friend and my SOULMATE. Happy anniversary my sweet love ❤

Moreover, the husband-wife couple welcomed their first child, Brooklyn Rose Orton on November 22, 2016. However, Kim had some other stories from her past too.

Just like Randy, she was married to someone else before with whom she has three sons.

Even though, we know how many children Kim Marie Kessler had from her previous relationships, we do not know any of her children’s names.

As Kim Marie Kessler is married to one of the highest paid wrestlers of all time, Randy Orton, his net worth belongs to her as well. Randy Orton has a net worth estimated to be around $15 million. As per some source he makes the salary in $million which helped him to make an amazing net worth.

No matter how much net worth Kim has, she is living her life like a queen after marrying Orton. Her big diamond ring after Randy proposed her speaks about how lavish her life is.

While she was dating her boyfriend Randy, people took on the social media sites to call Kim Marie Kesler a ‘gold digger.’ Later she proved everyone wrong after marrying him and now the gold digger accusations are nowhere to be found.

Besides, Orton owned a house in Missouri which he sold for $775k. Some of his car collections are:

Kim Marie Kessler was born in the United States. Besides that, she has not revealed much about her early life and childhood years. Moreover, information regarding her family is still unknown.

Talking about her education and career, due to the mysterious nature of Kim, there is no information regarding the educational background of her at present.

Must Read: Buddy Murphy Engaged to get Married to Girlfriend; Know his Dating History, Net Worth, WWE Career, and Wiki-Bio

Kim is very fond of wrestling since her early days. Randy Orton’s wife was a huge fan of Orton. Before having a crush on him, she would regularly watch WWE.

In an interview, Kim said:

Kim Marie Kessler belongs to American Nationality and white ethnicity. She has a dog named Spike.

Kim has maintained a good relationship with her husband’s ex-wife, Samantha and their daughter Alanna Marie Orton.

She even has a matching tattoo with Randy Orton. Other than that, she hasn’t revealed her age, height, and other facts.

Stay updated with us!