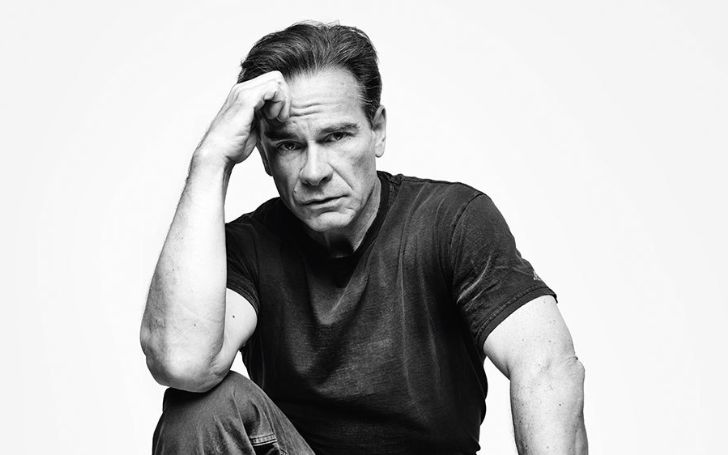 Having a perfect married life is not in everyone’s fortune. But Peter Scolari, an Emmy-winning actor is very fortunate to have a  stable relationship with his current wife after four failed marriage.

The father of four faced several ups and downs in his life. To know more about his life, read the article below.

Who Is Peter Scolari?

According to Peter, his parents were not compatible with each other but stayed together only because they loved him and his siblings. He has described his father as an abusive, rageful man and his mother as an alcoholic. Besides, he is a graduate of City College of New York.

Scolari’s first acting job was in a short-lived 1980 sitcom Goodtime Girls. He was then cast co-starring with Tom Hanks, in another sitcom Bosom Buddies. Scolari joined the cast of Newhart, opposite Bob Newhart, in 1984, where he played Michael Harris, until the series’ conclusion in 1990.

The star has also worked in Broadway and has appeared on various plays like Wicked, Sly Fox, Hairspray, etc. In 2014, Scolari portrayed Yogi Berra in Bronx Bombers. He played the part of The Wizard in the Broadway musical Wicked.

The actor has also struggled with substance abuse in the past and suffers from bipolar disorder. He aspired to be a professional baseball player but an elbow injury put a stop to his dreams.

Peter Scolari’s Net Worth: How Much Does He Earn?

Peter Scolari, being highly experienced and famous in the acting sector, has an estimated net worth of about $2 Million. He owes his net worth mostly to his successful acting career that began in the late 1970s. Moreover, a TV star makes an average salary of $150k to $1million.

The actor received 4 Emmy nominations out of which he won an award during his acting career. Scolari won an Emmy in 2016 for Outstanding Guest Actor in a Comedy Series for his appearance in the series Girls.

Peter Scolari is for the fourth time in his life. As of now, he is living with his fourth wife, Tracy Shayne. They have been married now for 6 years.

The actor walked down the aisle for the first time back in 1981 when he married Lisa Kretzschmar. This marriage of his lasted for just two years as the couple divorced in 1983.

The second time he married was with Debra Steagall. They tied the knot on 14 December 1986 and Scolari has 2 children from this marriage. However, their relationship ended in 1996.

Scolari married for the third time on 12 October 1998, with Cathy Trien. He met Cathy in Boston, 1996 while performing in a production of Grease. He has two children from this marriage as well. The marriage lasted six years as the couple got divorced on 29 May 2004.

Peter married Tracy Shayne, his fourth wife on 21 June 2013 and the couple are still together to this day. However, they do not have their own children yet. Moreover, he has 3 sons & one daughter; Joseph Scolari, Keaton Scott Scolari, Nicholas Scolari, and Cali Elizabeth Scolari.

Where is the birthplace of Peter Scolari?

How old is Peter Scolari?

What is the Nationality of Peter Scolari?

Which Ethnicity does Peter Scolari belong to?

What is the color of Peter Scolari’s eyes?

How tall is Peter Scolari?