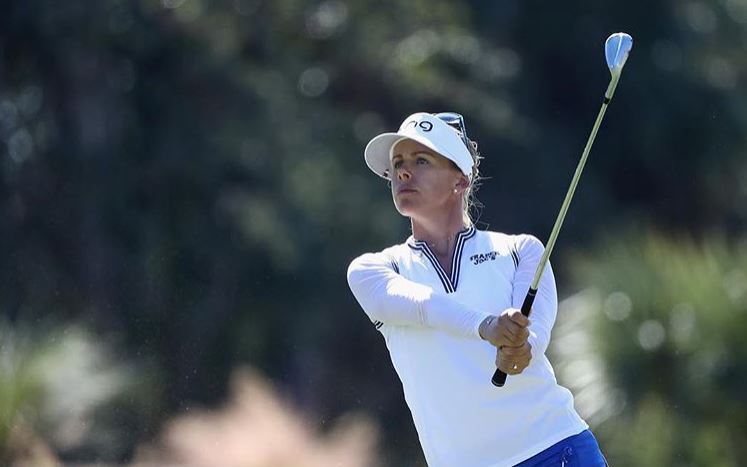 The revolution that we see in the Golf is mesmerizing. Before male was dominant in golf sport, but many female golfers are emerging. Sweden’s Pernilla Lindberg recently won the title of ANA Inspiration on the eighth playoff hole beating South Korea’s Park In-Bee. She marks her first LPGA victory. The suspension of the play for a day due to darkness brought luck to Lindberg on Monday. She also said,

“I was super excited and pumped when it went in, but the first thing I told Daniel (Taylor, her caddy, and fiancée) was that In Bee is going to hole hers too, I know what an incredible putter she is and what a fighter she is,”

“I had my mind already set on going to 17 again, and when she didn’t hope it, it is just a dream come true.”

Pernilla Lindberg is now at the 34th position in the world rankings while she ranked 95th before the victory. Now, let’s gather more information about Pernilla Lindberg dating affair, boyfriend, married life, net worth, bio, and wiki facts.

The talented female golfer Lindberg is currently dating her boyfriend, Daniel Taylor. Her boyfriend is also her caddy. The couple is already engaged. The pair is all set to get married soon. Lindberg thinks her fiancée as her most significant source of inspiration.

After a long tough week on the golf course here in New Zealand we got to enjoy a great day off on Waiheke Island today. Had an amazing lunch with some stunning views at Mudbrick Vineyard! #nzwomensopen #lpgainnz #visitauckland #nzmustdo

Caption: Pernilla Lindberg went to enjoy a great day off on Waiheke Island, New Zealand with her fiancee, Daniel Taylor. Besides this, Lindberg hasn’t disclosed anything about her past affairs and boyfriends.

We wish all the best to the couple for their new chapter of life.

One of the sweetest things about being a Ping staff player is receiving a solid gold putter for winning a Major Championship! #pinggolf #playyourbest #crosssportswear #traderjoes #eccogolf pic.twitter.com/7bSbeCtdlh

According to LPGA, Lindberg has earned around $2.3 million from her career earnings. Recently she won $420,000 from her ANA Inspiration victory. However, the actual net worth of Lindberg is under review.

Pernilla Lindberg was on born 13 July 1986 in Sweden. She went to Oklahoma State and graduated with a bachelor’s degree in International Business in May 2009. Pernilla joined the Duramed Futures Tour in 2009. In the same year, she got qualified for both the LPGA Tour and the LET for 2010. In 2008, Lindberg played on Sweden’s winning Espirito Santo Trophy team.

Recently, Lindberg won the ANA Inspiration, a major championship. This win is her first professional win. She triumphed in a sudden-death playoff over Inbee Park and Jennifer Song, which stretched to eight holes.

Patience, hard work, and perseverance.. Three things I pride myself on…and I got to bring all that out over the last few days! I still cannot believe it all lead to this 🏆 @anainspiration @lpga_tour @pingtour @crosssportswear @titleist @kaenon @eccogolf @traderjoes

The win over Park Bee enhanced Lindberg′s world ranking from 95 to the career-best 34.

Swedish golfer, Pernilla Lindberg’s age is 31 years. She belongs to White ethnicity. Her birth sign is Cancer. Pernilla stands only 1.6 meters tall and weighs around 60kg. She has about 13.4k followers on her official Instagram account and 10.8k followers on her Twitter account.