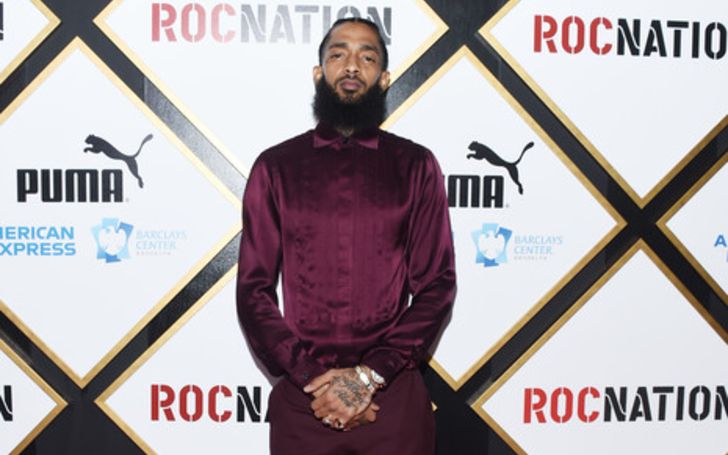 The year 2019 has been one of the saddest in terms of losing people, and at just the beginning stage of the year, many celebrities left us forever. And among one of the recent losses is that of the beloved Rapper Nipsey Hussle.

Nipsey became popular for his hit mixtapes like Bullets Ain’t Got No Name series, The Marathon, The Marathon Continues and Crenshaw. He was among the top and rising star the music industry ever witnessed. And he passed away so early he might possibly have been one of the legends of music. So how did the talented musician die? What really happened? To know all go through the article below.

American Grammy-nominated rapper Nipsey Hussle was shot dead outside his clothing store, Marathon Clothing in Los Angeles on Sunday. After shooting the singer many times the gunman fled from the scene, no arrests yet made.

Along with The Marathon singer, two other people were also shot and all of them were immediately taken to the hospital. Although he was still alive, unfortunately, he passed away shortly after reaching the hospital.

Initially, the police did not confirm Nipsey was the one who died. It was only revealed after the Mayor of Los Angeles, Eric Garcetti expressed his condolence through his Twitter.

“Our hearts are with the loved ones of Nipsey Hussle and everyone touched by this awful tragedy. LA is hurt deeply each time a young life is lost to senseless gun violence. My Crisis Response Team is assisting the families coping with shock and grief.”

Police stated that the other two men were in a stable condition and out of danger. After the news of the celebrated rapper’s demise was out, the condolence messages started to pour out from the celebrities like Lebron James, Stephen Curry, Rihanna, and Colin Kaepernick.

Nipsey Hussle whose real name is Ermias Davidson Asghdom came out a few days after his tweet where he wrote:

“Having strong enemies is a blessing.”

The singer himself was a former member of the local Rolin 60’s Neighborhood Crips Gang. In a 2018 interview with the Los Angeles Times, the rapper told:

“I grew up in gang culture. We dealt with death, with murder. It was like living in a war zone, where people die on these blocks and everybody is a little bit immune to it.”

May the departed soul rest in peace!

How was Nipsey Hussle’s Personal Life?

Before his untimely demise, Nipsey Hussle was in a romance with his longtime girlfriend actress Lauren London. The couple began dating in 2013 and since then they were together.

The two even welcomed their first child a son Kross Asghedom on August 21, 2016. In addition, Nipsey was also the father of a daughter, Emani Asghedom from his previous affair with someone else. The love birds maintained a healthy love life which they showed in public.

Apart from that, the Caged Animal actor did not have any link and connection with anyone. Besides, Hussle was active on social media and had Facebook, Instagram, and Twitter accounts.

Nipsey’s partner Lauren was also in a relationship with the singer Lil Wayne. The Games People Play star and Wayne share a son, Cameron Carter, who was born on September 9, 2009.

How Much was Nipsey Hussle’s Net Worth?

You May Also Like: How Much is American Rapper Lupe Fiasco Net Worth?

Nipsey was also a part owner of the record label All Money In No Money Out Records alongside his brother Samiel Asghedon and his friends. Furthermore, in 2017, he launched his own luxury clothing brand The Marathon Clothing in Los Angeles, California. The store sells online clothes for men, women, and children of all age group and other accessories as well.

Where and when was Nipsey Hussle born?

Who are Nipsey Hussle’s siblings?

What nationality did Nipsey Hussle belong to?

What was Nipsey Hussle’s ethnicity?

How tall was Nipsey Hussle?

When did Nipsey Hussle die?

How old was Nipsey Hussle?