Home Entertainment Nathalie Hart Is Pregnant: Who Is The Father Of Her Child? Married Or Soon-To-Get Married?

Nathalie Hart Is Pregnant: Who Is The Father Of Her Child? Married Or Soon-To-Get Married? 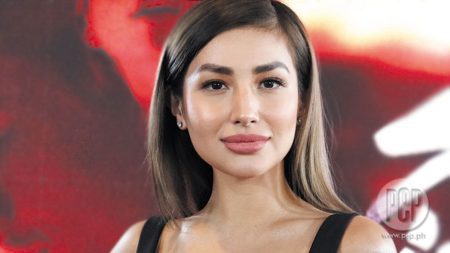 Nathalie Hart is a Filipino actress best known for participating and becoming one of the finalists in the fifth season of StarStruck. Recently, news of  Nathalie Hart being pregnant with a child has made a headline to the media coverage. But since then, people are questioning about the father of the child?

The gorgeous Filipino actress Nathalie Hart admitted that she is pregnant with four months old baby. And guess what? Nathalie will be giving birth to her first baby. The father of the child is Nathalie Hart’s long-term Indian boyfriend, Mayank Sharma, who is in the real estate business.

Nathalie Hart and her boyfriend are planning to tie the knot in December this year at Sydney, Australia. Moreover, she also intends to give birth to her baby at Australian City. Fans are eagerly waiting to see “Sin Iceland” Nathalie Hart getting married to her loved one. Regarding her Pregnancy, she spoke:

“I cried. It’s not funny Malaga, it was like a joke kasi, and I couldn’t believe it. I’m used to being like a mom whenever I help my relatives because I’ve done that many times, but this one is different.”

She further added both her family and her boyfriend’s completely support them, saying:

“I didn’t expect it.” “Marami pa akong trabaho but I see having a baby as a blessing. It’s nothing to be ashamed of. I want to look at my pregnancy positively.”

She further revealed that she wants to give birth to a baby girl, saying.

“That’s what I am very excited about, the gender. I want my first child to be a girl.”

All the best for the sexy queen Nathalie Hart for her upcoming marriage and advanced congratulation for the baby.

Nathalie Hart was born in 1992 in San Pedro, Laguna, Philippine to her Filipino parents. Her real name is Princess Tinkerbell Cristina Marjorie Pedere Snell. She is famous with her stage name Nathalie Hart and Kristina Snell. She celebrates her birthday on 14th April that makes her age 26. Her height measures 5 feet 4 inches.

Nathalie is a model and actress who has appeared in almost 26 television shows and more than nine movies including 2018’s “Sin Iceland” as Tasha. She won the best actress award in 2016 from the movie “Siphayo” in International Film Festival Manhattan: Film Festival Director Award.

Nathalie Hart is also a frequent user of social media site such as Instagram, where she posts her sexy and seductive pictures for her fans. She has amassed over 274k followers on her Instagram.

Nathalie is even active on Twitter where she has over 47.9k followers.