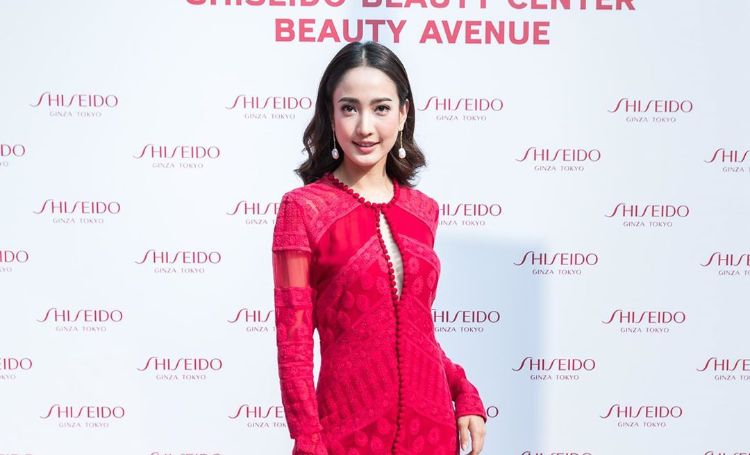 Natapohn Tameeruks, popular as Taew is a recurring name in the South Asian entertainment industry. Just 30 years of age, the beauty sensation is the on-demand Channel 3 model with numerous TV shows and films to her name.

The emerging talent Taew is fully focused on her career today, but that does not rule out any possibility of sharing loving relationships. So, today we focus on the off-screen chemistry and on-screen journey of the gorgeous Thai model.

Unlike most of the high-school love affairs and stints, Tameeruks found her soulmate Ton Arch/ Aach Lhaisakul in her highschool. Today, they are in their thirteenth year together into their romantic relationship. Despite the ups and downs, the duo held it together and are going strong into their love story.

The cute couple attended the reputed SHISEIDO back on Valentine’s Day, 14 February 2019. Earlier in 2018, they were also pictured shopping around Hong Kong.

Tying the Knot? Not Just Yet!

When Taew attended SHISEIDO with her boyfriend, they gave an interview regarding their relationship and what the future holds for the two. Turns out, the duo will wait for some time since they are focusing on their professional life for a better future.

Her lucky boyfriend, Ton said there are not any definite plans in sight but the date is imminent as both of them are working hard and saving money. Surely, the fans are excited and so are we!

Tameeruks is a renowned figure in the Thai glamor industry and is a significant part of the nation’s top entertainment network, Channel 3.

Since debuting in the network back in 2006 with Narak as the lead, she never looked behind. She starred as the main character in the majority of shows like Khun Chai Ratchanon, Lom Son Rak, and Game Saneha.

The charismatic beauty already signed for two television projects for 2020 and 2021, as Leh Bunpakarn and Miti Tee Sarm respectively.

Taew graced her talent in the big-screen as well on a few occasions. She played cameo roles of Namtarn in Dek Hor and Nakee in the sequential picture, Nakee 2.

Prior to working in television, Tameeruks appeared in different music videos back in 2004. Fans saw her in Pod Duang’s Consultants, Polycat’s Alright, and May Be You.

Surprisingly, she herself possesses a passion for singing too. She sang Wind Hidden Love (2015), and Happy Birthday Channel 3 alongside fellow actress Nittha Jirayungyurn. Lately, she released another song How Much Miss and Beloved by the Farmhouse in 2019.

YouTube: Taew Natapohn performing at a concert with James Ji in 2018.

In total, Taew has 18 individual titles to her name and further 18 nominations in different genres like the best actress, public favorite, rising star, etc.