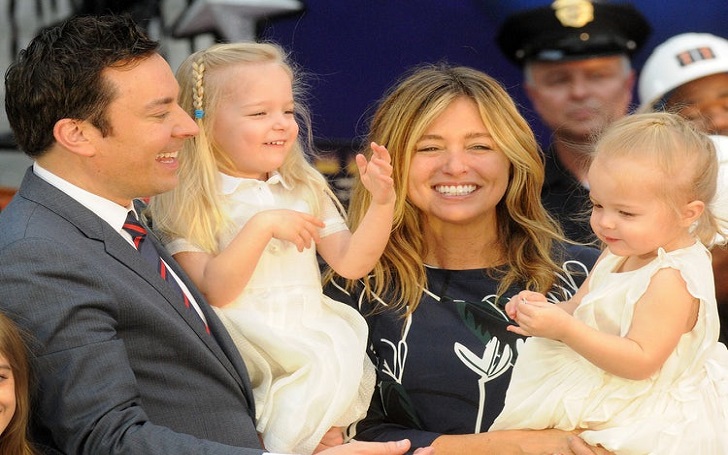 Nancy Juvonen is an American producer, and she alongside Drew Barrymore own a production company called ‘Flower Films.’

Lately, a lot of rumors have spread about Nancy Juvonen, and the host of ‘The Tonight Show’ host, Fallon’s divorce, and people believe that they’re living separate lives. But before we get into details, let us go back in time and get scenes from the early times of their relationship.

So, the power duo met each other in May 2007 after Drew Barrymore introduced them to each other on Nancy’s birthday party, and soon, they began dating. Nancy Juvonen and Jimmy Fallon made their first date so romantic,  Fallon proposed Nancy in August 2007 on the dock at sunset with an engagement ring designed by Neil Lane in New Hampshire.

The couple married on December 22nd, 2007, and together, they have 2 daughters named Winnie Rose, born in 2013, and Frances Cole, born in 2014. They were both born via ‘Gestational Surrogacy’. Sometimes called a ‘Gestational Carrier‘, it takes place when an embryo created by In Vitro Fertilization Technology is implanted in a surrogate.

Have you heard about Nancy Juvonen divorce buzz? Well, there isn’t any proof that they’re getting divorced. But rumors started in 2015 when he caught his wedding ring on the side of a table corner at home. People also believe that he was starting to drink way too much and what not. You guys sure do know the drill after having a dispute regarding marriage. So, that was that!

However, despite all the rumors, the pair were seen together in Beverly Hills at the 74th Annual Golden Globe Awards. They held hands like it was their first year or marriage and looked perfectly synced. So, what’s going on? Trust me; we’re as confused as you guys right now.

“Honey, remember when the wedding photographer made us pose for a romantic sunset kiss?” wrote the “Tonight Show” host. “That was 10 years ago! Happy Anniversary!”

Nancy Juvonen Net Worth and Career and

Like we already mentioned, she is an American film producer and one of the owners of the production company ‘Flower Films.’ But before any of this happened, she worked odd jobs, employed at a Dude Ranch in Wyoming, worked for an artist, worked as a private jet attendant.

Finally, she got her big break as an assistant to ‘Clarence Clemons’, one of the members of the ‘E Street Band.’ And in 1993, Nancy was introduced to Drew Barrymore by her brother Jim, and they started working together until their biggest success’ Flower Films.’

So, with all of that, sources believe that Nancy Juvonen net worth is somewhere around $20 million. Stay tuned!!