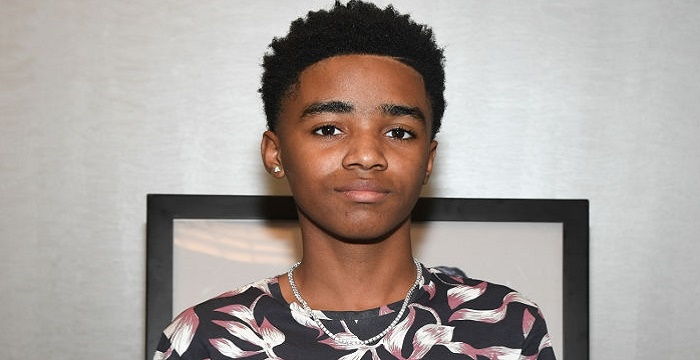 Myles Truitt is a young, talented and charming actor with an African-American background. He set his journey from being a newcomer in the entertainment industry and has walked a full-fledged journey before he could make a name for himself.

Myles chose acting as his passion in a very young age and had his parent’s hands on his back. His determination and desire to succeed has risen as his debut movie Kin is set to release on 31st August 2018, Tomorrow. He is all set to spread his charm once again in the year 2018.

Also, read Musical.Ly Star Mariamstar1 Is Moving Ahead To A Bright Career With Her Family’s Support At Just 12

The African-American actor Myles Truitt was born in the year 2002 in Atlanta, Georgia, USA. He celebrates his birthday on 1st February, which makes his age 16.

His mother Danielle Jackson keeps on posting his entire journey from a child actor to achieving stardom on her blog named ‘thestagemom.com.’ She is even his manager. Myles has two younger brothers named Blaze and Chase Truitt.

Myles’ father who is often seen in the family’s social media posts, continually supports him. The actor Myles is associated with the ‘Been Broke Before’ movement which motivates people suffering from the poverty. He also plays basketball and is a huge fan of  Toronto Raptors.

He is decently tall as he possesses the height of 5ft 9ins.

Myles was still studying when he auditioned for the role of young Ronnie Devoe in the American biographical television series The New Edition Story. It was about R&B group New Edition’s journey from their early days to rise to fame and later establishing themselves as one of the top adult’s acts in the hip-hop industry.

He was praised for his singing and dancing and his uncanny resemblance to Ronnie Devoe while acting showcased the young actor’s talents. He landed his second significant role on the supernatural television series called Superstitions where he played the recurring role of Arlo Hastings and has appeared on the episodes Pilot and Echoes of My Mind.

Myles is about to make his movie debut in the crime thriller ‘Kin,’ which is set to hit the screen on 31st August 2018. One of his most important early movie roles to date will be in the upcoming police drama- thriller ‘Dragged Across Concrete’ set to release this year on 3rd September.

Myles Truitt is an emerging actor who has earned immense popularity and appreciation from a very young age. He has summoned a fantastic amount of money from his acting profession. But what’s the figure of Myles Truitt net worth?

As of 2018, Myles Truitt net worth is under review. Once reviewed, we’ll update you.