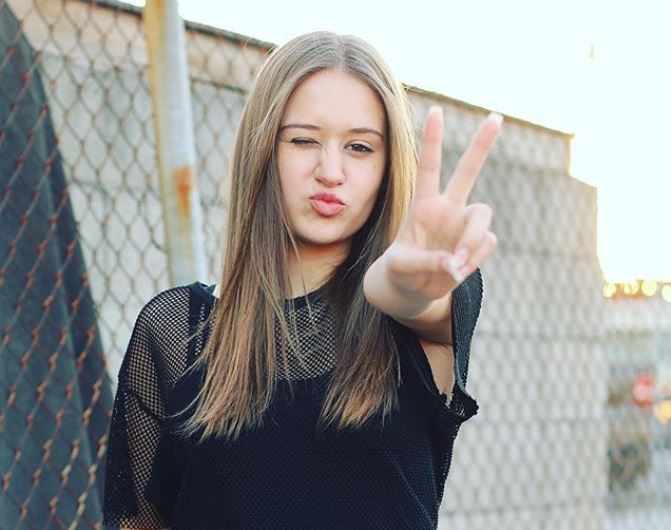 In the modern age, social media has an intimate relationship with the people. One of the most prominent and growing apps right now is Musical.ly. Riley Lewis is a 15-years-old teenager who became a Musical.ly star gaining a massive number of fans. Over the years, she has posted many videos of her lip syncing to various songs. She also has a YouTube channel where she posts different kinds of videos. But besides her professional career, what else do you know about her? Is Riley Lewis dating someone? Who is Riley Lewis boyfriend? Along with the love life, are you interested in knowing Riley Lewis wiki facts?

Who is Riley Lewis Boyfriend? A Glimpse of Her Dating Affair

Talking about Riley Lewis dating affairs, she is currently in a relationship with Tyler Phillips. Riley Lewis boyfriend, Tyler is also a musical.ly star and YouTuber. In addition to that, they also have a YouTube channel together named Riley and Tyler.

Lewis first met Tyler on August 18, 2014. Since then, the couple is together and shares a healthy relationship. Not only that, the duo shares various photos of them getting comfortable with each other on their Instagram account.

Apart from her relationship with Tyler, there’s no information about her past relationships. She has also never been spotted with any other boy and never involved in any affairs. It seems Lewis is delighted with Tyler right now and doesn’t plan on separating from him any time soon.

Caption: Riley Lewis with her boyfriend.

More on the article: Riley Lewis wiki-bio and career.

How much is Riley Lewis Net worth?

Being a YouTuber, Riley Lewis earns most of her income by posting videos on her YouTube channel. As of 2018, she has more than 173k subscribers on her YouTube channel and her videos gains over 9.1 million views. She often uploads challenge videos, make-up tutorials, games, and many other contents which usually features her boyfriend and her friends. Considering her subscribers and views, there’s no doubt Riley Lewis net worth in on a higher scale.

Lewis first kicked off her career with the musical.ly app. Since then, she has posted many videos on the app. The first ever video that she posted on the app was her lip-syncing to the song “Roses” by The Chainsmokers.

At the moment, Lewis has more than 450,000 fans on her musical.ly app. Furthermore, she also starred on the popular web series Chicken Girls alongside Annie LeBlanc and Hayden Summerall.

Apart from that, Lewis joined YouTube, creating a self-titled channel on June 4, 2017. As of now, she has 173,000+ subscribers on her YouTube channel. Some of the most viewed videos on her channel are This or That, Chapstick Challenge, Snapchats, Chicken Girls, and Who know me better.

In addition to that, she is also an Instagram star with more than 209.5k followers. Are you ready to get ahead of Riley Lewis wiki-bio facts?

In 2002, Riley Capri Lewis was born in Arizona, United States. She celebrates her birthday on December 24th. She is currently residing in Temecula, California. Riley is professionally known as Riley Lewis. Her mother’s name is Tiffany Lewis, but her father’s name is still not known. She also has a brother named Dakota Lewis and a sister named Madison Lewis.

Lewis was homeschooled at first but later attended public school. She is now a high school student. She holds American citizenship and belongs to the white ethnicity.

As of now, Riley Lewis age is 15. Her zodiac sign is Capricorn. Lewis has a slim body with a height of 5 feet 1 inches and weighs about 45 kg. She has dark blonde hair and stunning blue eyes. To update fans on her latest videos, she uses social media like Instagram, Twitter, and YouTube.