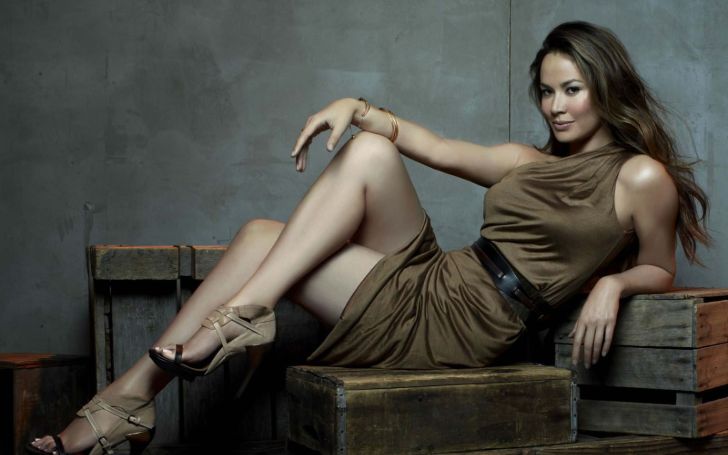 Life does not always go as planned and so did happen in the life of Moon Bloodgood. She never wanted to be an actor but acting is the sole thing she does today.

Moon Bloodgood has been quite successful in the entertainment industry working in films and television as well as video games and web series. But what about her real life story? Does she share a romantic relationship with a lucky guy? Get the details below.

Who is Moon Bloodgood?

Moon Bloodgood is an America actress of movies, television, as well as a voice actress of video games. She has been active in this industry since 1997.

Feeling good, how about u?

Bloodgood was born on 20 September 1975 in Alliance, Nebraska, and she grew up in Anaheim, California. She has multiple descents from her parents as her father, Shell Bloodgood, is American and her mother, Sang Cha, is Korean. Moon once said: “My theory is because I’m Asian and white I sort of look like the future. I’m the melting pot.”

Who is the Husband of Moon Bloodgood?

Moon Bloodgood is currently in a marital relationship with her husband, Grady Hall. Bloodgood’s spouse, Hall is an American director of commercials and music videos. Moreover, he is also a screenwriter and producer.

Bloodgood and her director husband, Grady tied the knot on 27 August 2011. Since their wedding day, we never heard any controversy or rumors of divorce about this pair and we wish we never will hear that. Furthermore, Bloodgood is fond of children which we can analyze on the basis of her Instagram posts, but does she have her own children?

Bloodgood shares two children with her life partner, Grady. The couple welcomed their first child, a daughter, Pepper Hall, on 15 December 2012. Likewise, they became parents for the second time as their son, Archie Hall, on 19 December 2015.

May I always fiercely practice gratitude. My mother and kids and my friends are my world ♥️

Before becoming the wife of Grady Hall, Moon Bloodgood was engaged to actor Eric Balfour. Their engagement took place on 24 April 2005 and they parted their ways in early 2007.

How Much is Moon Bloodgood’s Net Worth?

The net worth of Moon Bloodgood as of 2019 is $900 thousand. Regarding the sources of her income, she has been doing a wonderful in acting. The average earning of an American actor/actress is $50,110 per annum and $20.14 per hour.

Bloodgood started her acting career from the 1997 video game, Nuclear Strike in the voice role of Naja. Then, she entered tv series, Just Shoot Me as Penny in 2002. Likewise, she also made her debut in movies through Win a Date With Tad Hamilton in 2004 as a gorgeous woman. The movie earned $21.3 million.

Talking about movies, Moon is famous for Terminator Salvation (2009) which made a box office collection of $371.4 million. In this thriller drama, she starred alongside Christian Bale, Sam Worthington, Bryce Dallas Howard, and others.

Bloodgood portrayed the role of Katie in Paul Walker starrer Eight Below (2006) which went on to collect $120.5 million at the box office. In 2010, she appeared as Marina in Dwayne Johnson starring movie, Faster which ultimately collected $35.6 million against the budget of $24 million. Some of her other movies include What Just Happened (2008), The Power of Few (2013) Beautiful Boy (2010).

As for televison series, Moon appeared as Rita Shelton for 13 episodes of Day Break (2006-2008) first season. Similarly, she appeared in 13 episoses of Journeyman as Livia Beale in 2007. In the third season of Code Black (2018), Moon portrayed the role of Rox Valenzuela for 13 episodes.

Bloodgood’s most prominent role was in Falling Skies (2011-2015) as Anne Glass. She appeared for 52 episodes from its first to fifth season. For that role, she was also nominated for Saturn Award For Best Actress on Television.

Moon Bloodgood stands with a good height of 5 feeet 10 inches and her weigh is 60 Kg. which goes well with her height. Her body measurements are 35-25-36. Moreover, dark brown is the color of both her eyes and hair.

Where is the birthplace of Moon Bloodgood?

Which nationality does Moon Bloodgood belong to?

What is the ethnicity of Moon Bloodgood?

How tall is Moon Bloodgood?

What color are the eyes of Moon Bloodgood?

What color is the hair of Moon Bloodgood?