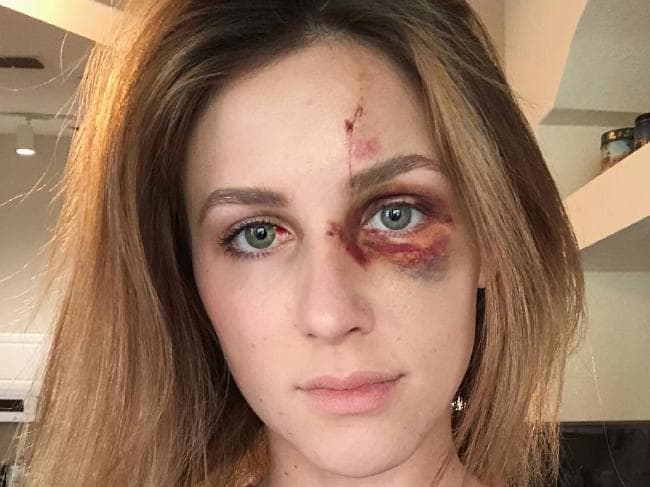 An Instagram star, Melissa Gentz valiantly shared her domestic abuse pictures after the millionaire boyfriend; Eric Bretz allegedly attacked her.  The image comprised of terrible injuries, including a blue-black eye and a cut across Melissa Gentz forehead. She confronted how Eric Bretz became livid from the picture of baring her shoulder in a low-cut neckline blacktop. Want to know Melissa Gentz wiki?

Eventually, cops arrested Eric for the following abuse charges. However, he was released on a $60,000 bond by Florida police after two days in Hillsborough County jail. Let’s dig in details about Melissa Gentz domestic abuse violence along with her wiki, bio, age, height, and boyfriend, Eric Bretz.

Millionaire boyfriend, Eric Bretz was all in the rage after Melissa uploaded a revealing picture where she uncovered her shoulder in plunging black top.  According to the report, he threw an Instagram star on the floor, pulled out chunks of hair and banged bottle on her head.

She escaped from the apartment and notified the hotel doorman to call out for an ambulance. Also, Melissa informed the cops and returned to the room to collect her belongings, where Eric Bretz was arrested.

After the day of Eric Bretz’s arrest, Melissa Gentz again shared the initial Instagram snap, which had infuriated her boyfriend. The caption motivated people to end an abusive relationship like her.

“I’m re-posting this photo because my ex-boyfriend deleted it without me seeing. He said that women with boyfriends could not have photo’s ‘showing breasts’ on Instagram, he said that I needed to accept my reality because I was the woman of the relationship.”

Similarly, she unveiled audio of the assault where her boyfriend claimed:

Why are you so dumb? Stop being stupid, see. You have no more notion of p … none. I already told you, see. Stop being dumb!’

The pair was dating for three months until Eric assaulted Melissa over the revealing Instagram snap. Eric Bretz is the son of one of Brazil’s largest food shopping chains’ owner.

So, Florida cops released the millionaire convict on a $60,000 bond after two days in the prison. Nonetheless, the court ordered to seize his Brazilian passport and abstain any contact with Melissa Gentz.

The reports claimed that Eric Bretz became jealous and argumentative from insomnia medication. Also, he was intoxicated with four beers and three-quarters of a bottle of wine.

Currently, Melissa Gentz age is 22 years old. She is a college student at the University of Southern Florida. The social media personality, Melissa Gentz, has more than 218,000 followers on Instagram, who hails from the city of Belo Horizonte in Brazil.

As per Instagram feeds, she confirms solid bond with mother, father, and grandmother since“ she has been uploading their pictures more often. She grew up with a younger sister named Monique Gentz.