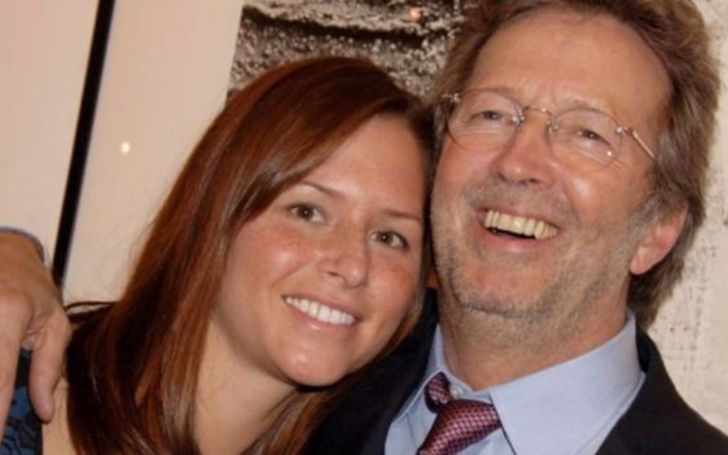 When you find the true love of your life, age is just a number. Melia McEnery and her husband are three decades apart in age and they are spending nearly two decades of married life. Maybe you will learn the commitment of the relationship from this exemplary couple.

Melia McEnery is the second wife of legendary musician Eric Clapton. As we all know the accomplishment of Clapton, what about his wife? Here, today we will learn about McEnery’s married life, previous affairs, children, net worth. So, stick with us until the end of the article.

How Is Melia McEnery’s Married Life With Eric Clapton?

Melia McEnery is currently in a marital relationship with Eric Clapton since 1 January 2002. The couple shared wedding vows at the Chapel of St. Mary Magdalene located in Ripley, Surrey which also happens to be Eric’s birthplace.

In 1999, the pair first met at a party hosted by Armani in Columbus, Ohio. Eric was already 53 years old whereas Melia just turned 22 at that time. Though she had been ordered not to, she mustered up enough courage to approach Eric for an autograph not for her but for her uncle.

After a brief introduction, they both developed a genuine interest in each other and went on to have a dinner date. Their dating affair soon started however, they broke up a year later due to a stressful career of Eric.

Some years later in the late 2000, there were rumors of the lady being pregnant and the child was none other than Eric’s. On 13 June 2001, the duo gave birth to a daughter whose name is Julie Rose. A week after the daughter’s delivery he decided to marry Melia in her family home during the celebration of father’s day.

The duo walked down the aisle on Jan 1, 2002, at the Chapel of St. Mary Magdalene in Eric’s place of birth. The pair tied the knot after her two daughters were baptized.

During the wedding, their daughter was six months old and along with her 16 years old step-sister, Ruth Kelly Clapton was baptized at the ceremony. On 14 January 2003, the pair welcomed the second daughter Ella May Clapton. Likewise, they welcomed their third daughter, Sophie Belle Clapton on 1 February 2005.

Melia McEnery And Her Husband’s Past Affairs And Children

Previously, Melia was in a romantic relationship with her long term boyfriend Chris Losinske. As a matter of fact, McEnery broke up with him to be with Eric. Following the breakup, she started her relationship with Eric and the rest is history.

Read Similar: Rebecca Felgate is Dating a Boyfriend; Who is the Lucky Guy?

Clapton was a lady magnet back on his youthful days and dated and married popular faces in the industry. Firstly, he walked down the aisle with a British photographer and model, Pattie Boyd which lasted from March 1979 to June 1989.

Afterward, Clapton dated the Italian model, Lory Del Santo and also romantically involved with Yvonne Kelly with whom he shares a daughter, Ruth. Clapton also had a son, Conor born in 1986 from his relationship with Lory.

Unfortunately, just at the age of 4 years, Conor fell out from an open window on the 53rd floor of a Manhattan apartment building and died.

How Much Is Melia McEnery’s Net Worth?

As of 2019, Melia McEnery has an estimated net worth of $200,000. She works as a senior clinical advisor for Crossroads Centre Antigua which her father founded. This foundation helps treat both drugs and alcohol addicts.

Read Also: How Much Is Narvel Blackstock’s Net Worth?

In contrast to McEnery’s, her spouse, Eric Clapton’s net worth is around $250 million. He ranks #53 on Rolling Stone’s Top 100 Artists of All-Time. Likewise, he is also the only person to be inducted into the Rock and Roll Hall of Fame three times.

As of now, McEnery lives a lavish lifestyle with her family. The couple is in a marital relationship for 17 years and still strong without any split rumor and controversies.

When and where was Melia McEnery born?

How old is Melia McEnery?

What is Melia McEnery’s ethnicity?

Which school did Melia McEnery graduate from?

What color are the eyes of Melia McEnery?